U.S. Crude Closes Under $40 a Barrel to Breach Long-Time Low

Oil hadn't closed below $40 since February 2009, although it briefly traded below that level on Friday. Monday's closing price was the lowest since Feb. 18, 2009. 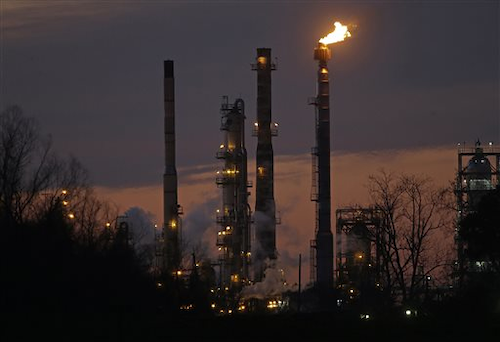 NEW YORK (AP) — The price of U.S. oil closed under $40 a barrel on Monday for the first time since the days of the global economic crisis on fears of a slowdown in the world economy.

Already trading at six-year lows on a prolonged slump, U.S. crude fell $2.21 to finish at $38.24 per barrel. Oil hadn't closed below $40 since February 2009, although it briefly traded below that level on Friday. Monday's closing price was the lowest since Feb. 18, 2009.

Brent crude, a benchmark for international oils used by many U.S. refineries, slipped $2.77 to $42.69 Monday and is at its lowest levels since March 2009.

Signs are mounting that growth in China, the second-largest economy in the world, is slowing down. That's making investors worry more and more about the health of the world economy, and those fears led to a sell-off in stocks Friday and again on Monday, when China's main stock market took its biggest dive in eight years. The Dow Jones industrial average spent the day far in the red, losing almost 600 points.

The U.S. has ramped up oil production to historic levels over the last few years while OPEC countries continued to churn out crude. Supplies have built up and growth in the world economy has been slow, with China's economy losing steam and Japan's shrinking. That resulted in a supply glut that has punished oil prices: the price of U.S. crude has fallen about 60 percent over the last year.

U.S. crude averaged more than $90 a barrel from 2011 through 2014. Its price has fallen for eight straight weeks, the longest slump in almost 30 years.

The decline in oil prices has hit the energy sector hard, and oil and gas and oilfield services companies were some of the biggest losers on the S&P 500 index during Monday's plunge. The hardest-hit stocks included Newfield Exploration Co., which fell about 10 percent and took the largest loss on the S&P 500, along with Cabot Oil & GasCo., Marathon Oil Corp., Baker Hughes Inc., Hess Corp., ConocoPhillips, BP PLC and Exxon Mobil Corp.