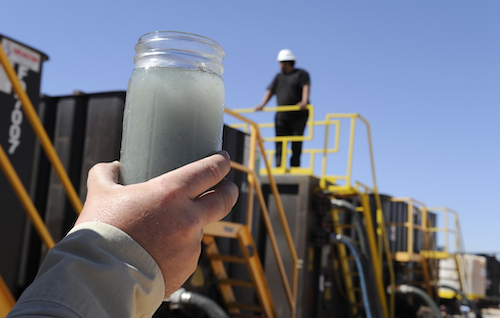 Just north of Fairmont, overlooking the east side of the Monongahela River and Bellview across the water, a small plant is busy providing an alternative.

Since 2013, Fairmont Brine Processing has been cleaning up frack fluid and producing distilled water for re-use in the field and rock salt for treatment of snowy winter roads. General Manager Brian Kalt recently provided TheDPost.com with a tour of the site.

The process is highly technical, with towers and pipes, ponds and basins, tanks and conveyor belts. But Kalt puts it all in one simple sentence: "In all actuality, we're really just boiling salt out of water."

Fairmont Brine took over the site of the defunct AOP Clearwater in 2012 and after some facility upgrades, began operations the next summer.

The plant employs about 25 people — some engineers — all with mechanical and technical aptitude.

The process begins with eight loading bays on the site's upper lot. A driver pulls in, hooks up and has an empty tank in 17 minutes. "It's dummy proof," Kalt said. Each driver has a radio frequency identification card linked to the trucking company and the gas company. The card contains an analysis of the fluid. "That way we can treat automatically." A meter captures volume and time and two bill ladings are printed out. "It's all about moving trucks as quick as possible."

A lading is a document issued by a carrier which details a shipment of merchandise and gives title of that shipment to a specified party. For companies that want to frack with recycled distilled water, the driver can stay hooked up and reload to go back to the well pad.

"If you're going to frack with distilled water, you would drastically reduce your chemical consumption at the wellhead," he said, and maybe save $100,000 per well. There's not as much use of recycled water here as in Texas, he said, because of the easy access to fresh water.

"For the most part, we're putting that in the river."

A truck can also load up with liquid calcium chloride — for road application, frack fluid and for use when pulling plugs from fracked well bore stages to control pressure and keep the gas in place. It can be very expensive, Kalt said, but they usually give it for free or pennies on the dollar.

"We think we're helping out the industry." Prices are depressed, companies are pinching pennies. Every well in the Appalachian basin uses liquid calcium chloride, he said. "We also use it as a way to get our name out there. And it really has, because everyone crawls out of the woodwork for that fluid."

From the trucks, the fluid is piped to a three-chamber impoundment where hydrocarbons are skimmed off and then off to a row of tall tanks and pipes. A mechanical coalescer separates oil and water. Fluid is filtered through granulated activated carbon media vessels. Hydrocarbons are pushed into a tank and the water continues on.

This treated brine water goes into a 6.3 million gallon impoundment, where it can be trucked off for use on roads or well pads. But most of it goes down into the plant. In the tower of pipes, attached to the main metal building, the sodium chloride crystals are boiled out of the water.

Inside, the slurry goes into a centrifuge where the salt is drawn and transported on a conveyor belt into the storage shed. The distilled water goes out into the river or into a 1.6 million gallon impoundment where it can be re-used for tracking or donated to fire departments for firefighting.

The salt entering the shed is hot, and bright white. A handful feels similar to fine beach sand. They produce about 60 tons a day on average, Kalt said, and the shed will hold about 1,000 tons.

Fairmont Brine's main client has been, and will be for a while, Antero Resources.

"Antero's been a great client," he said.

Fairmont Brine, Kalt said, spent a year and $2 million engineering a new plant in Doddridge County — 10 times the size of the Fairmont plant — for Antero that could also serve other companies.

Kalt was unpleasantly surprised in August to learn that Antero signed on with Veolia Water Technologies and Veolia North America to design and build the $275 million facility.

"It's just disappointing, it really is. We're a handful of guys that somehow pulled this off. . We gave them everything. We didn't charge them."

Gov. Earl Ray Tomblin praised the Antero deal after it was announced, in August.

Antero expects the new plant will take two years to build, so Kalt will keep Antero's business until then.

"Losing $2 million for a company this size — it's huge," Kalt said. "We thought it would open doors to build facilities for other operators. . It's still in my head and it really stings."

Despite the setback, Fairmont Brine presses on.

They're now assembling equipment on the upper lot to build a new processing facility that will eliminate some steps and make the process more efficient. It could be complete sometime in the spring.

"We've got a lot going on right now," Kalt said. "It's constantly a work in progress right here."