Authorities in a southern Chinese city on Saturday scrapped a plan to build a uranium-processing plant, one day after hundreds of local residents protested against it because of safety concerns. Protesters paraded through the streets of Jiangmen on Friday, holding banners and wearing T-shirts with phrases opposing the project while chanting slogans. 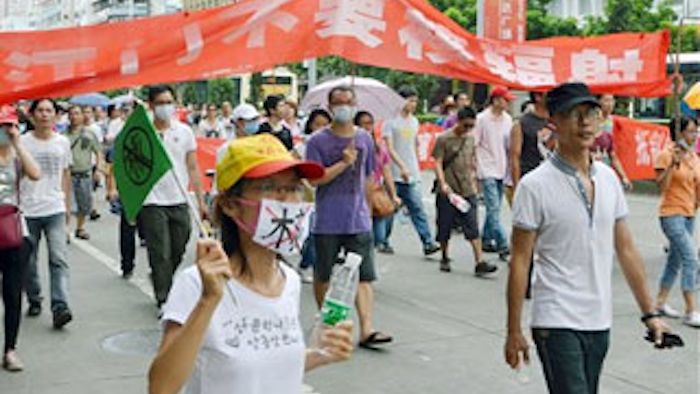 BEIJING (AP) — Authorities in a southern Chinese city on Saturday scrapped a plan to build a uranium-processing plant, one day after hundreds of local residents protested against it because of safety concerns.

"The people's government of the city of Heshan has decided to respect the public opinion and will not consider CNNC's Longwan industrial park project," read the one-line announcement.

CNNC could not be immediately reached for comment, but its plans are part of national efforts to reduce China's reliance on coal and to boost the use of clean energy.

In March, the corporation signed agreements with the Heshan government regarding both land use and investment for the industrial park, according to state media.

Saturday's announcement by the Heshan government came after hundreds of protesters paraded through the streets of Jiangmen on Friday, holding banners and wearing T-shirts with phrases opposing the project while chanting slogans. "Give us back our rural homes. We are against nuclear radiation," they shouted in scenes seen in television video.

Heshan is part of the greater Jiangmen area. The protest was in response to a risk evaluation report of the planned project, which was released July 4 with a 10-day public comment period. Critics say those reports usually are a formality designed to facilitate approval.

Local officials initially responded by extending the consultation period by another 10 days, but by Saturday morning they said the plan was scrapped.

Increasingly aware of environmental safety, members of the Chinese public have been taking to the streets to oppose environmentally risky projects, and local governments have yielded under public pressure in some cases — by scrapping the projects, postponing them or relocating them.

Those unsanctioned protests — which can turn violent — have become a major source of social unrest in China and pose a challenge to local governments that must balance between maintaining social order and boosting economic growth.

The Jiangshan incident also shows that environmental disputes usually get solved in streets instead of town halls. Environmentalists have long called on local governments to take steps allowing for greater transparency and better public involvement when introducing projects that may be environmentally risky.