In a rebuke to the Obama administration, the U.S. Court of Appeals for the District of Columbia ruled Tuesday that the Nuclear Regulatory Commission has been violating federal law by delaying a decision on a proposed nuclear waste dump in Nevada. 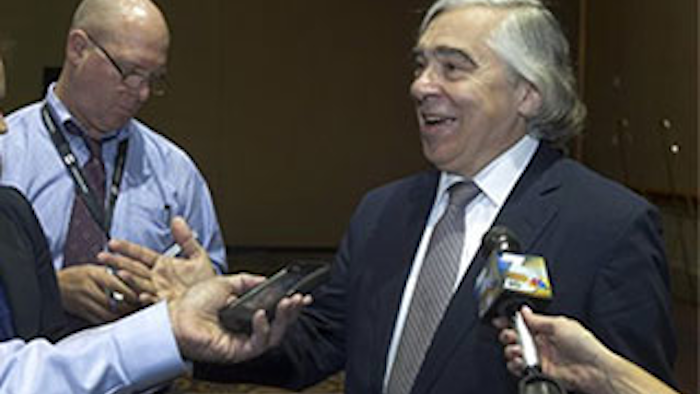 WASHINGTON (AP) — In a rebuke to the Obama administration, a federal appeals court ruled Tuesday that the Nuclear Regulatory Commission has been violating federal law by delaying a decision on a proposed nuclear waste dump in Nevada.

By a 2-1 vote, the U.S. Court of Appeals for the District of Columbia ordered the commission to complete the licensing process and approve or reject the Energy Department's application for a never-completed waste storage site at Nevada's Yucca Mountain.

In a sharply worded opinion, the court said the nuclear agency was "simply flouting the law" when it allowed the Obama administration to continue plans to close the proposed waste site 90 miles northwest of Las Vegas. The action goes against a federal law designating Yucca Mountain as the nation's nuclear waste repository.

"The president may not decline to follow a statutory mandate or prohibition simply because of policy objections," Judge Brett M. Kavanaugh wrote in a majority opinion, which was joined Judge A. Raymond Randolph. Chief Judge Merrick B. Garland dissented.

The appeals court said the case has important implications for the separation of powers between the executive and legislative branches of government.

"It is no overstatement to say that our constitutional system of separation of powers would be significantly altered if we were to allow executive and independent agencies to disregard federal law in the manner asserted in this case by the Nuclear Regulatory Commission," Kavanaugh wrote. "The commission is simply defying a law enacted by Congress ... without any legal basis."

A spokesman for the NRC said Tuesday the agency was reviewing the decision. He declined further comment.

Energy Secretary Ernest Moniz said the Energy Department was not a party to the lawsuit, but he characterized the Yucca Mountain project as "a complete stalemate." He said he saw no evidence of that changing.

"Currently we do not have funding," he told reporters at a clean energy conference Tuesday in Las Vegas.

The court's decision was hailed by supporters of the Yucca site, which has been the focus of a dispute that stretches back more than three decades. The government has spent an estimated $15 billion on the site but has never completed it. No waste is stored there.

"This decision reaffirms a fundamental truth: The president is not above the law," said South Carolina Attorney General Alan Wilson. The Obama administration "cannot pick and choose which laws to follow and which to ignore," Wilson said.

South Carolina and Washington state were among several parties to a lawsuit seeking to force the NRC to rule on the Yucca Mountain application. The states both have large nuclear waste sites that would use the Yucca repository.

The Obama administration, under pressure from Senate Majority Leader Harry Reid of Nevada, abandoned the project early in the president's first term. In 2011, the NRC allowed the shutdown to stand, citing "budgetary limitations" imposed by Congress. The NRC is an independent agency that oversees commercial nuclear operations.

Reid, a Democrat, called the appeals court decision "fairly meaningless," noting that Congress has nearly eliminated funding for Yucca and is unlikely to restore it.

"This isn't even a bump in the road," Reid said. "This, without being disrespectful to the court, means nothing."

Even if the Obama administration moves forward on the application, "there's no money" for Yucca Mountain, Reid said. "We've cut out funding for many years now and there's none in our budget to start it."

Reid is a longtime opponent of the plan to bury waste at Yucca Mountain, which has drawn nearly unanimous opposition from Nevada elected officials, but support from lawmakers, especially Republicans, in many other states, as a crucial part of the country's commercial nuclear operations.

Republican Reps. Fred Upton of Michigan and John Shimkus of Illinois called the court ruling a "significant milestone" that made clear the Obama administration acted prematurely in terminating Yucca Mountain. Upton chairs the House Energy and Commerce Committee, while Shimkus heads a subcommittee on environment and the economy.

"Congress and the courts have spoken out to prevent billions of taxpayer dollars and three decades of research from being squandered," Upton and Shimkus said. Last month, 335 House members voted to boost funding for the Yucca project in a larger spending bill on energy and water.

"Our attorneys presented a strong case that the federal government must follow the laws passed by Congress, and the court agreed," Ferguson said.

Officials in Washington and other states expect the NRC to conduct "a fair and objective processing of the Yucca Mountain licensing application and look forward to a decision on the merits of the application," Ferguson added. "This is what Congress intended and affords the best opportunity for a permanent disposal facility for the nation's high-level radioactive waste."

Garland, the chief judge on the appeals court, said in a dissent that Congress has already spoken on Yucca Mountain by rejecting funding for it.

The court's decision in the case "will indeed direct the Nuclear Regulatory Commission to do a useless thing," Garland wrote.

Kavanaugh and Randolph were appointed by Republican presidents, Garland by a Democrat.