The operator of Japan's tsunami-crippled nuclear power plant said Tuesday that about 300 tons (300,000 liters, 80,000 gallons) of highly radioactive water have leaked from one of the hundreds of storage tanks there — its worst leak yet from such a vessel. 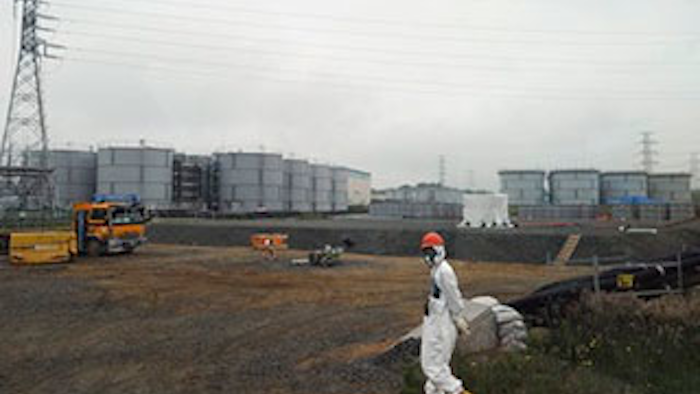 TOKYO (AP) — The operator of Japan's tsunami-crippled nuclear power plant said Tuesday that about 300 tons (300,000 liters, 80,000 gallons) of highly radioactive water have leaked from one of the hundreds of storage tanks there — its worst leak yet from such a vessel.

Tokyo Electric Power Co. said the contaminated water leaked from a steel storage tank at the wrecked Fukushima Dai-ichi plant. TEPCO hasn't figured out how or where the water leaked, but suspects it did so through a seam on the tank or a valve connected to a gutter around the tank.

TEPCO said that because the tank is about 100 meters (330 feet) from the coastline, the leak does not pose an immediate threat to the sea. But Hideka Morimoto, a spokesman for Japan's nuclear watchdog, the Nuclear Regulation Authority, said water could reach the sea via a drain gutter.

Four other tanks of the same design have had similar leaks since last year. The incidents have shaken confidence in the reliability of hundreds of tanks that are crucial for storing what has been a never-ending flow of contaminated water.

"We are extremely concerned," Morimoto told reporters. He urged TEPCO to quickly determine the cause of the leak and its possible effect on water management plans.

TEPCO spokesman Masayuki Ono said the leaked water seeped into the ground after largely escaping piles of sandbags added to a concrete barrier around the tank.

Workers were pumping out the puddle and the remaining water in the tank and will transfer it to other containers, in a desperate effort to prevent it from escaping into the sea ahead of heavy rain predicted later in the day around Fukushima. By Tuesday afternoon they had captured only about 4 tons (4,000 liters, 1,000 gallons), Ono said.

The water's radiation level, measured about 50 centimeters (2 feet) above the puddle, is about 100 millisieverts per hour — five times the annual exposure limit for plant workers, Ono said.

Based on a preliminary assessment, the watchdog defined the leak as a level 1 incident, the second-lowest on an International Nuclear and Radiological Event Scale of eight.

The plant suffered multiple meltdowns following a massive earthquake and tsunami in March 2011. Hundreds of tanks were built around the plant to store massive amounts of contaminated water coming from the three melted reactors, as well as underground water running into reactor and turbine basements.

However, contaminated water that TEPCO has been unable to contain continues to enter the Pacific Ocean at a rate of hundreds of tons per day. Much of that is ground water that has mixed with untreated radioactive water at the plant.

The water that leaked from the tank had been partially treated, with cesium and salt removed, before being stored.

Ono said the latest leak was by far the worst from a steel storage tank in terms of volume. The previous four cases involved leakages of only up to 10 liters (2.5 gallons).

"We have no choice but keep building tanks, or there is no place to store the contaminated water," Ono said.

The massive amount of radioactive water is among the most pressing issues affecting the cleanup process, which is expected to take decades.

To reduce leaks unrelated to the tanks, plant workers are using measures such as building chemical underground walls along the coastline, but they have made little improvement so far.