The Nebraska utility that owns a nuclear power plant that has been idle since April 2011 says the troubled plant is now ready to restart, but federal regulators will make the final decision. 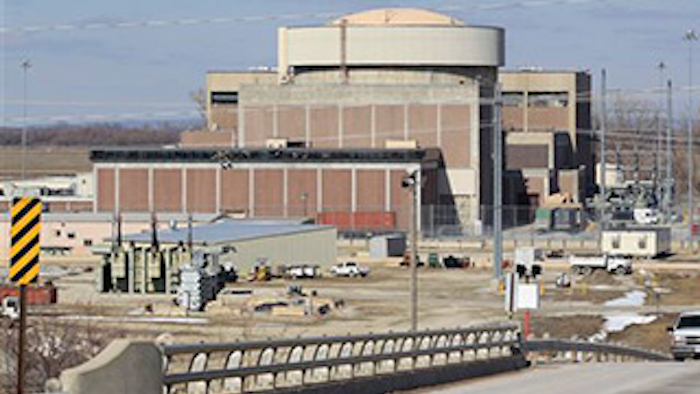 OMAHA, Neb. (AP) — The Nebraska utility that owns a nuclear power plant that has been idle since April 2011 says the troubled plant is now ready to restart, but federal regulators will make the final decision.

The Omaha Public Power District submitted a 139-page report to the Nuclear Regulatory Commission this week making the case that the Fort Calhoun plant is ready. The report was posted online Wednesday.

NRC officials have said more than 90 percent of the concerns have been addressed at Fort Calhoun, but regulators are still reviewing the latest repairs, spokeswoman Lara Uselding said Wednesday.

Uselding reiterated that there is no timeline for the repairs to the plant 20 miles north of Omaha that sits across the Missouri River from Iowa, and regulators won't allow the plant to restart until they're confident the plant can operate safely.

Fort Calhoun initially shut down for routine maintenance, but significant flooding in 2011, a small fire and a series of safety violations forced it to remain closed.

Lou Cortopassi manages Fort Calhoun as part of the Exelon Corp. firm OPPD hired to run the plant. He said the causes of Fort Calhoun's problems have been addressed, and it is ready to operate safely.

Since Fort Calhoun closed, workers have inspected and repaired systems through the plant to address damage caused by the flooding and fire in 2011. And the way the plant is managed has been overhauled to encourage workers respond aggressively to any concerns.

"Major improvements have been made in the safety and reliability of structures, systems and components at FCS (Fort Calhoun)," Cortopassi said in the report. "The plant, the people and the processes are ready to support safe and efficient restart and operation of FCS."

The remaining areas of repairs that regulators haven't signed off on yet are related to engineering work that has been done in several areas of the plant, Uselding said.

Last month, Fort Calhoun was heated up to test its pressurized steam pipes for leaks in an important milestone that signaled the plant was nearing the end of the repairs. No new issues were discovered during those tests.

OPPD spokesman Jeff Hanson said the plant was heated up again last week without using nuclear power, so it will be ready to restart quickly if regulators give their approval.

"Throughout the whole process, we've had safety as our No. 1 priority," Hanson said.

When it is operating, Fort Calhoun typically accounts for nearly one-third of the electricity OPPD generates, and the utility has had to buy power on the open market to help meet customer demand during peak periods of the past two summers.

The cost of replacement power is being spread over three years, which will help make it manageable.

OPPD increased electricity rates 6.9 percent last January largely to pay for the cost of repairing the nuclear plant. But no rate increases are planned for next year mostly because the utility worked to limit spending elsewhere in the budget.