A missing shipment of radioactive cobalt-60 was found Wednesday near where the stolen truck transporting the material was abandoned in central Mexico, the country's nuclear safety director said. 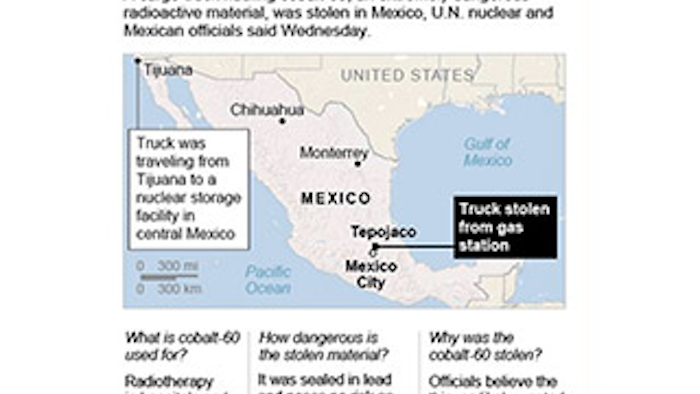 MEXICO CITY (AP) — A missing shipment of radioactive cobalt-60 was found Wednesday near where the stolen truck transporting the material was abandoned in central Mexico, the country's nuclear safety director said.

The highly radioactive material had been removed from its container, officials said, and one predicted that anyone involved in opening the box could be in grave danger of dying within days.

The cobalt-60 was left in a rural area about a kilometer (a half a mile) from Hueypoxtla, an agricultural town of about 4,000 people, but it posed no threat or a need for an evacuation, said Juan Eibenschutz, director general of the National Commission of Nuclear Safety and Safeguards.

"Fortunately there are no people where the source of radioactivity is," Eibenschutz said.

Commission physicist Mardonio Jimenez said it was the first time cobalt-60 had been stolen and extracted from its container. The only threat was to whoever opened the box and later discarded the pellets of high-intensity radioactive material that was being transported to a waste site. It had been used in medical equipment for radiation therapy.

"The person or people who this took out are in very great risk of dying," Jimenez said, adding that the normal survival rate would be between one and three days.

He said there was no word so far of anyone reporting to area hospitals with radiation exposure. He said those who exposed themselves to the pellets could not contaminate others.

Federal police and military units on the scene put up a cordon of 500 meters (yards) around the site.

The cargo truck hauling the cobalt-60 was stolen from a gas station Monday in the neighboring state of Hidalgo, about 40 kilometers (24 miles) from where the material was recovered, Jimenez said. Authorities had put out an alert in six central states and the capital looking for it.

The truck was taking the cobalt to a nuclear waste facility in the state of Mexico, which is adjacent to Mexico City

The material was used in obsolete radiation therapy equipment that is being replaced throughout Mexico's public health system. It was coming from the general hospital in the northern border city of Tijuana, Eibenshutz said.

Before the container was found, he said the thieves most likely wanted the white 2007 Volkswagen cargo vehicle with a moveable platform and crane.

Eibenschutz said there was nothing to indicate the theft of the cobalt was intentional or in any way intended for an act of terrorism.

On average, a half dozen thefts of radioactive materials are reported in Mexico each year and none have proven to be aimed at the cargo itself, he said.

According to the complaint of this theft, a truck marked "Transportes Ortiz" left Tijuana on Nov. 28 and was headed to the storage facility when the driver stopped to rest at a gas station in Tepojaco, in Hidalgo state north of Mexico City.

The driver, Valentin Escamilla Ortiz, told authorities he was sleeping in the truck when two men with a gun approached him. They made him get out, tied his hands and feet and left him in a vacant lot nearby.

When he was able to free himself, he ran back to the gas station to get help.

Eibenschutz said the transport company did not follow proper procedures and should have had GPS and security with the truck.

"The driver also lacked common sense because he decided to park along a highway so he could sleep," Eibenschutz said.

The company couldn't immediately be located for comment. One Mexico City company called "Transportes Ortiz" said the truck was not theirs and they had nothing to do with the incident.

Eibenschutz had said early in the day that direct exposure to cobalt-60 could result in death within a few minutes, but Jimenez said the pellets involved were sealed.

The health risk depends on time of exposure and distance to the pellets, said Dr. Fred Mettler, a University of New Mexico's radiology professor and a U.S. representative to the U.N. on radiation safety.

"If you hold the source in your hand for five or six or eight minutes you are probably going to get enough radiation to your whole body that may well kill you," he said. "But if somebody is across the street, they are not going to enough to really make them sick."