The U.S. Department of Energy described the radiation leak as minuscule, posing no public health threat, but residents and officials voiced frustration at a town hall, saying the DOE and managers at the Waste Isolation Pilot Plant are leaving them in the dark about what's happening at the repository. 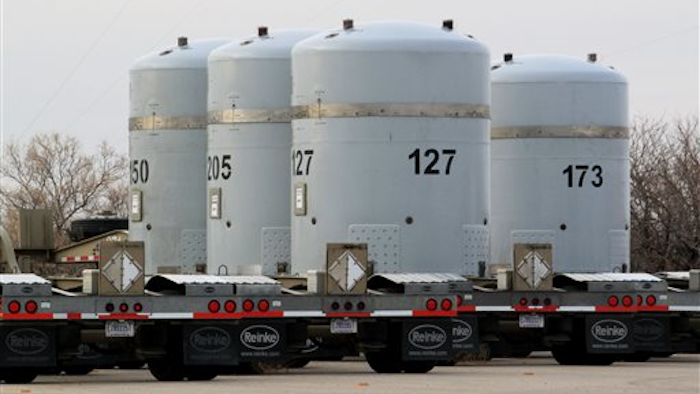 CARLSBAD, N.M. (AP) — It's been three weeks since the radiation sensors were triggered and the exhaust dampers at the federal government's only underground nuclear waste dump slammed shut, putting the repository's massive salt caverns off-limits and the nation's cleanup efforts on hold.

The U.S. Department of Energy says low levels of radiation made it past the ventilation system's air filters and exposed 13 workers. Agency officials describe the amount as minuscule, saying the workers aren't likely to face any serious effects and there's no public health threat.

But residents and officials voiced frustration at a town hall Thursday night, saying the DOE and managers at the Waste Isolation Pilot Plant are leaving them in the dark about what's happening at the repository.

"We think that we should be the No. 1 partner and know everything that is going on, from A to Z," he said, explaining that the community feels as if it's being sidestepped, with action being orchestrated in Washington, D.C., instead of locally.

Energy Department officials said there is no intent to hide anything and some information is simply unknown.

Questions about what caused the leak at the repository, the extent of the contamination and the future of the federal government's cleanup efforts have been swirling for days.

Work is ongoing to get air-monitoring equipment underground that will pave the way for specially trained crews to enter. A probe could be sent underground as soon as Friday, but Jose Franco, manager of the DOE's Carlsbad Field Office, said the timing of cleanup, and the resources and costs involved, won't be known until crews can actually enter.

Carlsbad resident Karen Armendariz said her first concern after hearing about the leak was the extent of contamination and whether her children and grandchildren would be affected. Despite the assurances from the DOE, she's still anxious.

"I hear what they're saying and I want to believe it, but it's just so much uncertainty," she said. "We do feel poorly informed."

Some of the uncertainty was quelled this week when officials announced that the level of radioactive particles being captured by monitoring equipment in the Carlsbad area had decreased significantly and was close to normal.

Janway told the audience of several dozen people that the systems at the plant worked, with filters capturing most of the radiation that escaped from the underground dump. Still, he said the investigation needs to be swift and efficient.

"The longer it takes to get to the bottom of this incident, the more damaging it is to Carlsbad and this project," Janway said.

David Klaus, the DOE's deputy undersecretary for management and performance, drew a round of applause from the crowd when he said there was no doubt WIPP would eventually continue with its mission of cleaning up Cold War-era waste. He said he was surprised employees questioned whether they would continue to have a job.

"WIPP is essential," he told the crowd.

Nine days later, sensors alerted officials to a release of radiation. Monitors as far as half a mile away later detected elevated levels of plutonium and americium in the air.