The biggest beneficiary of the record $1.4 billion fine levied against Pacific Gas & Electric Co. for a gas line explosion that killed eight people and destroyed dozens of homes in suburban San Francisco is the state of California, which stands to gain $950 million to spend any way it wants. 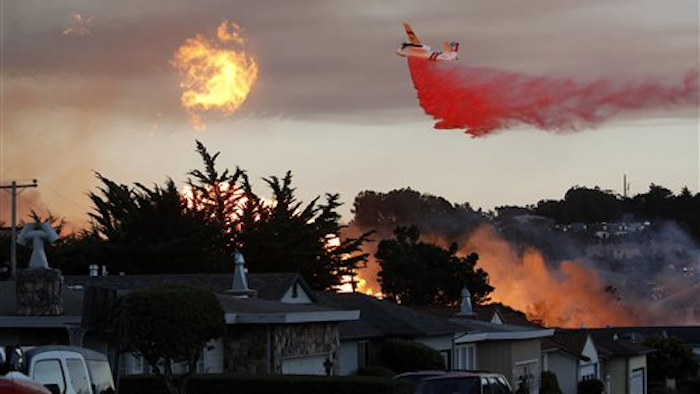 LOS ANGELES (AP) — The biggest beneficiary of the record $1.4 billion fine levied against Pacific Gas & Electric Co. for a gas line explosion that killed eight people and destroyed dozens of homes in suburban San Francisco is the state of California, which stands to gain $950 million to spend any way it wants.

That reality has set up a tussle over how the state punishes corporate wrongdoing and who should benefit from fines like the one Public Utilities Commission judges imposed on PG&E earlier this week for the 2010 blast. The judges wrote that "a fine of this magnitude is necessary to deter future violations" and said they were following established policy by earmarking the large fine for the state treasury.

The proposed judgment is the largest safety-related penalty ever imposed against a public utility in California. PG&E, which plans to appeal, has argued that the penalty should be "reasonable" and directed to benefit public safety.

The concern with pipeline safety was echoed by city officials in San Bruno, where the blast occurred, and consumer groups that want to see miles of aging gas lines tested, replaced or repaired.

State Sen. Jerry Hill, a Democrat whose district includes San Bruno, said Friday he will introduce legislation to slash the state's share by nearly 70 percent, to $300 million. According to his office, he'd shift $570 million from the fine to offset rate increases expected from PG&E pipeline improvements, and another $80 million would be devoted to pipeline safety programs.

"The Legislature can always find a need for an extra $950 million," he said in an interview earlier this week. "It should go to the people who were affected by it."

Industry consultant Brigham McCown, a former acting administrator for the federal Pipeline and Hazardous Materials Safety Administration, said it seems incongruous that the ruling faults the company for failing to spend enough on pipeline improvements and safety yet diverts most of the money to state coffers, with no strings attached.

"The money needs to go back into the system, versus the black hole of Sacramento," he said.

It's routine for the state treasury to collect PUC fines. Agency records from 1999 until early 2012 show the state was designated to receive $228 million from violations in dozens of cases. In some cases the agency orders a fine for the state, sometimes restitution for customers or other steps, and sometimes a combination of those penalties, the records showed.

According to the judges' decision, PG&E disagreed with agency staff that fines "must" be paid to the state's general fund, its main checkbook. The company, in an argument that could figure in its appeal, said the agency had the authority to designate those funds for pipeline safety.

But the judges concluded the company's argument was in conflict with the PUC's longstanding policy, as well as court rulings, and "flies in the face of the purpose of the penalties and fines."

"PG&E's proposal that all penalties be ... invested in pipeline safety, while creating a windfall for ratepayers, would not effectively deter it from committing further violations," the judges wrote. "Such an outcome would not even be considered an appropriate penalty, since PG&E has always been required to invest in pipeline safety."

According to the PUC, the judgment was based on nearly 3,800 violations of state and federal law, regulations and standards by PG&E in the operation of its gas pipelines. The $1.4 billion penalty also includes $400 million forpipeline improvements, and about $50 million to enhance pipeline safety.

The commission previously ordered PG&E, which serves customers in the northern two-thirds of California, to pay $635 million for pipeline modernization for the 2010 blast.

A 2011 federal investigation found the rupture occurred in a weak weld in a pipeline that PG&E records had shown as being smooth and unwelded. Among other failings, PG&E let 95 minutes go by before shutting off the natural gas that was fueling the fire, investigators said.

This year, federal prosecutors separately indicted PG&E on 27 counts alleging the utility violated pipeline safety requirements. The company, which had pleaded not guilty, faces additional fines of more than $1 billion if convicted.

San Bruno Mayor Jim Ruane praised the size of the PUC penalty but said the city was disappointed nearly $1 billion was headed to Sacramento. In a statement, he called on the agency to shift more of the penalty to pipeline improvements.

PG&E was hit with dozens of lawsuits from people who lost family members, suffered injuries or had property damage. Last year, PG&E said it expects to pay a total of $565 million in legal settlements and other claims from the 2010 blast.

Attorney Frank Pitre, who represented dozens of victims, said the penalty should be larger and "that money should all be allocated to safety improvements and pipeline safety."

"This was a public safety issue," he said. "That's what's at risk here."