Mexico's Congress approved a comprehensive energy reform that will break more than seven decades of state monopoly and dramatically expand the role of foreign and private companies in the country's oil and gas industry. 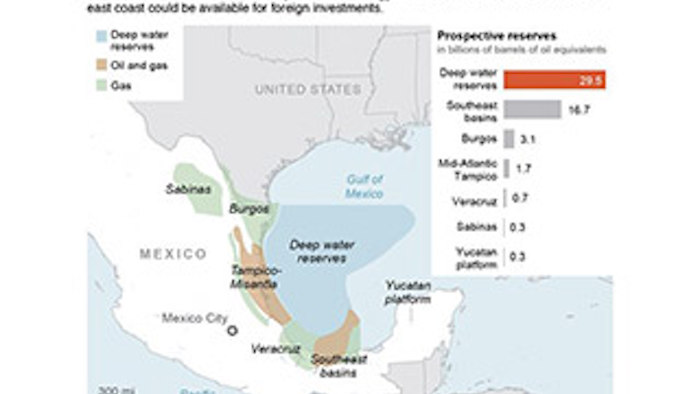 MEXICO CITY (AP) — Mexico's Congress approved a comprehensive energy reform that will break more than seven decades of state monopoly and dramatically expand the role of foreign and private companies in the country's oil and gas industry.

The package of new laws approved late Wednesday will now go to the desk of President Enrique Pena Nieto, who has made energy reform the cornerstone of his platform to expand Mexico's economy and to make the country a global competitor.

"Today we took a big step toward the future for Mexicans," Pena Nieto said via his Twitter account. "We will take better and more sustainable advantage of our energy resources."

The first calls for bids on new oil concessions and contacts are expected to be issued sometime in 2015. Pena Nieto's other reforms have included rewriting telecommunications, education and election laws.

"Of all the reforms that have been done up to now, this is without doubt, the most important," said Carlos Capistrani, chief economist in Mexico for Bank of America Merrill Lynch. "It has the potential to transform Mexico."

The Mexican government under Pena Nieto has advocated opening the country's oil and gas sector to bring billions of dollars in new investment and boost the country's flagging oil production.

Mexico saw its peak production in 2004, with 3.4 million barrels a day. It has fallen steadily since to the current 2.5 million barrels. With the reform, private companies with the expertise and technology lacking in the state oil company, Petroleos Mexicanos, or Pemex, will be able to exploit the country's vast shale and deep-water reserves.

The government predicts that with the reform, daily production will increase to 3 million barrels by 2018 and 3.5 million by 2025.

The reform creates an oil fund overseen by the Central Bank of Mexico to administer and distribute the new funds. The new rules also authorize private production of electricity.

Private exploitation of Mexico's oil and gas drilling will be allowed for the first time since the industry was nationalized 76 years ago. The overhaul is supported by the governing Institutional Revolutionary Party, or PRI, the conservative National Action Party and a smaller party that together formed the majority to get it passed.

Arguing against the legislation, leftist lawmakers brought a life-size picture of the late President Lazaro Cardenas on to the floor of the Senate to press their case that the governing party betrayed the beloved leader who expropriated foreign oil holdings in 1938. They contend the changes amount to the privatization of the oil industry, while saddling taxpayers with the legacy of past corruption and mismanagement at Pemex.

The most controversial parts of the energy overhaul include a provision to transfer about one-third of the state oil company's enormous pension debts to the books of the federal government. The pension debt, including similar pension liabilities at the state electricity company, totals around $151 billion, which is equal to about 10 percent of Mexico's GDP.

Opposition senators said any graft, malfeasance or corruption in those pension accounts should be cleared up before taxpayers are saddled with the debt.

For decades, the PRI ran Pemex and the country with little transparency or accountability. The party held the presidency from 1929 to 2000, and regained the office in 2012. The PRI has had a long and cozy relationship with the oil workers union, which has been implicated in multiple instances of corruption.