A coal terminal south of New Orleans has been polluting the Mississippi River for years and continues to do so daily, three environmental groups claim in a federal lawsuit. 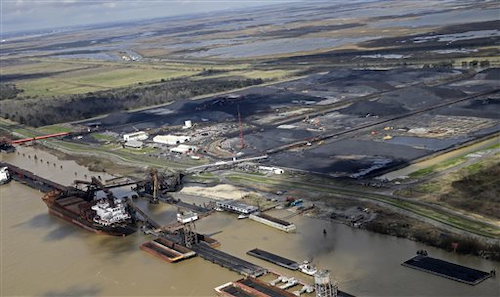 NEW ORLEANS (AP) — A coal terminal south of New Orleans has been polluting the Mississippi River for years and continues to do so daily, three environmental groups claim in a federal lawsuit.

Coal and petroleum coke fall from conveyor belts at United Bulk Terminals Davant LLC, landing both in the river and on its bank, according to the lawsuit filed Tuesday.

Black plumes of pollution, heavy enough to be seen from thousands of feet in the air, flow from the terminal into the river, and the products are visible on the bank below the river's high-water line, Marylee Orr, executive director of Louisiana Environmental Action Network, said in a teleconference about the lawsuit.

United Bulk, owned by Oiltanking GmbH of Hamburg, Germany, said it had spent $40 million and allocated another $40 million before November on improvements including pollution control. It did not say how much of that spending is specifically to protect the environment.

"We are disappointed that the plaintiffs have chosen to file suit despite our ongoing and constructive dialogue with them since they first came to us last November," the company said in an emailed statement. "We invest substantial time and money to ensure compliance with our air and water permits and have demonstrated our commitment to minimizing the impact of our operations on the environment and on the communities where we operate."

The Gulf Restoration Network and Sierra Club joined the action network in the lawsuit.

Scott Eustis, coastal wetlands specialist for Gulf Restoration Network, said state law requires immediate cleanup of spills. But he said UBT leaves spilled coal and pet coke on the batture between the river and levee as well as in the river, which is under federal jurisdiction.

"We have reported it to state authorities for years now. Their response has been inadequate at best," he said.

The state Department of Environmental Quality ordered United Bulk on Jan. 23 to clean the batture. On Feb. 21, it called for UBT to report within 30 days on what it had done toward a cleanup, according to an emailed copy of the order.

That order said a United Bulk representative told officials that an inspection on June 26, 2013, was during high water, when "piles of coal and coke are submerged in water and cleanup does not occur," but spills are cleaned up when water is low.

The environmental groups seek fines against United Bulk under the federal Clean Water Act and want the court to make the company clean the river and its bank.

Eustis said they also want covers around United Bulk's high-speed conveyor belts to contain any spills and over the hills of coal and pet coke stored at its 1,134-acre site, which includes nearly three miles of river frontage.

The United Bulk facility is one of the nation's two largest coal transport terminals, both at the Plaquemines Port, Harbor and Terminal District, according to the port's website.

The other, across the Mississippi River from Davant at Myrtle Grove, is owned by International Marine Terminals, a subsidiary of Kinder Morgan Energy Partners LP.

"We have similar issues at IMT. It's just one at a time," Eustis said in a telephone interview. "We're investigating and compiling. We're monitoring the facility. We have to do our homework."

A request for comment was forwarded from International Marine Terminals' Port Sulphur office to its headquarters in Houston.