Although the regulatory reform bill never once mentions coal ash, it allowed Duke Energy to avoid any costly cleanup of contaminated groundwater leaching from its unlined dumps toward rivers, lakes and the drinking wells of nearby homeowners. 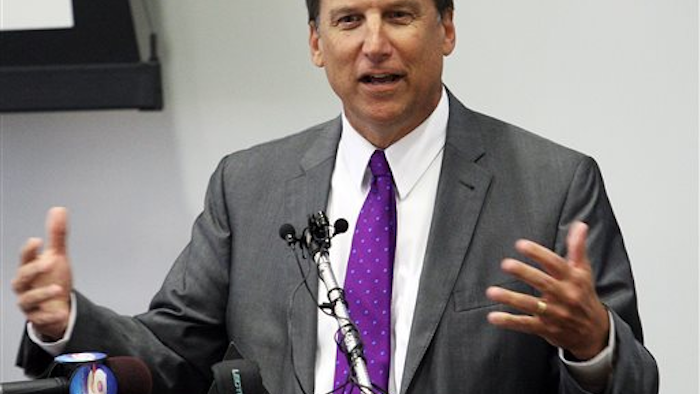 North Carolina regulators had for years allowed the nation's largest power company to pollute the ground near its plants without penalty. But in early 2013, a coalition of environmental groups sued to force Duke to clean up nearly three dozen leaky coal ash dumps spread across the state.

Documents and interviews collected by The Associated Press show how Duke's lobbyists prodded Republican legislators to tuck a 330-word provision in a regulatory reform bill running nearly 60 single-spaced pages. Though the bill never once mentions coal ash, the change allowed Duke to avoid any costly cleanup of contaminated groundwater leaching from its unlined dumps toward rivers, lakes and the drinking wells of nearby homeowners.

Passed overwhelmingly by the GOP-controlled legislature, the bill was signed into law by Gov. Pat McCrory, a pro-business Republican who worked at Duke for 28 years.

The level of coordination between Duke and North Carolina's lawmakers and regulators had long been of concern to environmentalists. But when a Duke dump ruptured on Feb. 2 — spewing enough coal ash to coat 70 miles of the Dan River with toxic sludge — the issue took on new urgency.

Federal prosecutors have launched a criminal investigation into the spill, issuing at least 23 grand jury subpoenas to Duke executives and state officials.

The first batch of subpoenas were issued the day after an AP story raised questions about whether North Carolina regulators had helped shield Duke from a coalition of environmental groups that wanted to sue under the U.S. Clean Water Act to force the company to clean up its coal ash pollution.

Still, regulators alone could not protect the company from its huge liability if the environmental groups persevered in court. So Duke officials lobbied — successfully — to change state law, itself.

Their vehicle was the Regulatory Reform Act. And they took aim at a provision that had been on the books for decades, requiring Duke to halt the source of contamination if its subterranean plumes of pollution crept more than 500 feet from its ash dumps.

North Carolina's 14 coal-fired plants have 33 waste pits. Each is surrounded by a "compliance boundary," with monitoring wells tracking the spread of underground pollution.

A compliance boundary is like an early warning system. If groundwater contamination inside the line exceeds state environmental standards, a company is supposed to take corrective action. The goal is to stop the spread of pollution to neighboring properties, as well as rivers and streams.

But that wasn't happening. Instead of enforcing the limit, state officials were letting Duke continue to pollute groundwater inside its compliance boundaries around old ash pits without taking any action to stop the contamination. At some plants, regulators even let Duke redraw its compliance boundaries when it looked like contamination might cross the line — a stalling tactic to avoid the cost of cleanup.

Data collected from Duke's own monitoring wells showed contamination beyond that 500-foot limit at several of its properties, with high levels of arsenic, selenium, lead and other poisonous contaminants found in coal ash.

After examining results from test wells at the ash sites, the Southern Environmental Law Center found that many exceeded state water-quality standards. Lawyers believed state officials were interpreting regulations to allow the company to profit rather than protect public health and the environment.

On behalf of Cape Fear River Watch, the Sierra Club, Waterkeeper Alliance and the Western North Carolina Alliance, the law center asked the state Environmental Management Commission to instruct the state to "interpret the groundwater protection rules as they were written."

The environmental groups wanted the commission to order regulators to force coal-ash operators to take immediate corrective action when toxic chemicals in groundwater exceeded state water quality standards at or beyond the compliance boundary.

The commission ruled against them, so the environmental groups appealed in state court.

That's when Duke's lobbyists began reaching out to lawmakers.

George Everett, the director of environmental and legislative affairs for Duke, said the company wanted the law changed to "be consistent with the rules."

"We advocated for the same position that the agency has used for 30 years," he told The AP.

Republicans took control of North Carolina's legislature in 2010 for the first time since Reconstruction and cemented full control of state government with the inauguration of McCrory as governor last year. That put them in prime position to implement an ardently pro-business, anti-regulation platform.

In talks with conservative legislators, Duke's lobbyists framed its problem as a property rights issue.

Rep. Chuck McGrady, one of only two Republican members of the state House to vote against the final version of the bill, recalls talking with Duke's lobbyists about the change in the groundwater contamination rules.

"They said it was a fairness issue, that they shouldn't be held responsible for the migration of pollution on their own site, that whatever costs they would need to bear should be in direct relationship of the migration of that pollution off their sites," said McGrady, whose Henderson County district borders some of Duke's dumps

Working closely with lawmakers, the lobbyists helped craft a provision to conform to the way state regulators had been interpreting the law. The change would allow Duke to contaminate groundwater until it crossed onto a neighbor's property.

Duke Energy and its executives have donated millions in recent years to both Republicans and Democrats. Though 2013 was not an election year, records show the company continued to give generously as its lobbyists sought to protect its ash pits.

A political action committee underwritten by Duke employees sent another $95,000 to Republican legislators and groups that support their campaigns — nearly five times the amount provided to North Carolina's Democratic legislators over the same time period

Rep. Tim D. Moffitt, an Asheville Republican who chairs the House Regulatory Reform Committee that crafted the bill, got a $4,000 check, the maximum contribution allowed by state law. Asked this month how Duke's provision was inserted, Moffitt said he had no idea.

Other GOP leaders interviewed by the AP also said they had no knowledge about who inserted the change.

"Our PAC has supported both parties over the years, some years the Democrats receive more than the Republicans and vice versa," he said.

McCrory spokesman Josh Ellis insisted that the change in the law didn't change anything at all.

He's right: The compliance boundaries are still in the same place, but only because the state environmental agency has not yet drafted new rules to comply with the new law, as required.

"They are pretending that the law had nothing to say about the compliance boundary moving," said Gerken, the environmental lawyer. "They're wrong. It directed DENR to change the rules to be consistent with the law."

He said the provision dramatically altered the way the state is supposed to monitor groundwater violations, including eliminating a mandate to clean up contamination inside the compliance boundary.

The effect of the change in the law played out earlier this month in a North Carolina courtroom.

Another section of the new law gave the state's blessing to another way for Duke to avoid liability for pollution: It could buy up residential properties abutting its leaky dumps.

Even before the new law passed, this gambit already had been put into practice.

Duke bought land near the Lee Steam Electric Station along the Neuse River in 2012 to extend the compliance boundary to the east, said Susan Massengale of the state Department of Environment and Natural Resources. And the company tried to buy neighboring land at its Cliffside Steam Station along the Broad River.

Records show that Progress Energy, which was acquired by Duke in a 2012 mega-merger, bought five acres adjacent to its coal-fired power plant near Asheville for about $1.1 million — a price tag far below what it would have cost to clean out its leaking coal ash pits.

"Note that additional property has been purchased which results in a slight shift of the compliance boundary," plant manager Garry Whisnant wrote to state regulators.

As a result, groundwater monitoring wells in the old compliance boundary would no longer be used, Whisnant said. Instead, the company wanted to build two wells on the new property.

The land is in the Lake Julian Trails community, a cluster of townhomes downhill from an ash pit.

"It was just part of the unfinished development that had not had any homes on it yet," said Linnea Dallman, former president of the Lake Julian Homeowners Association.

At first, residents weren't sure why the power company wanted the property. But they became suspicious when workers put up a black fence to seal off the land and posted no-trespassing signs.

Janet Casperson, the mother of a 2-month-old girl, said she's worried. She and her husband moved in the house in February, 2011, getting a really good deal on a new townhouse along a quiet cul de sac. They knew about the ash dump when they moved in, but they weren't that concerned — until recently.

For the most part, the community has been kept in the dark, she said.

"Do they think that we're stupid? That we're not going to figure out what's going on?" she said.

Gerken said the Lake Julian Trails is an example of how Duke is manipulating the system, calling it a "shell game." He said the Asheville ash dump has serious problems with toxic groundwater contamination. But instead of cleaning it up, the company has calculated it is cheaper just to buy more land to pollute.

"The state is supposed to require Duke to come in and take action to stop contaminating groundwater," he said. "Rather than take action when contamination hit that line, Duke had a better idea. They bought the neighboring property, moved the line further out, started over again, sampling at a new well, trying to avoid taking the action we contend they should have taken years ago."