A new study by NERA Economic Consulting and commissioned by the National Association of Manufacturers (NAM) reveals that a more stringent ozone standard from the Obama Administration could reduce GDP by $270 billion per year and carry a compliance price tag of $2.2 trillion from 2017 to 2040, increasing energy costs and placing millions of jobs at risk. 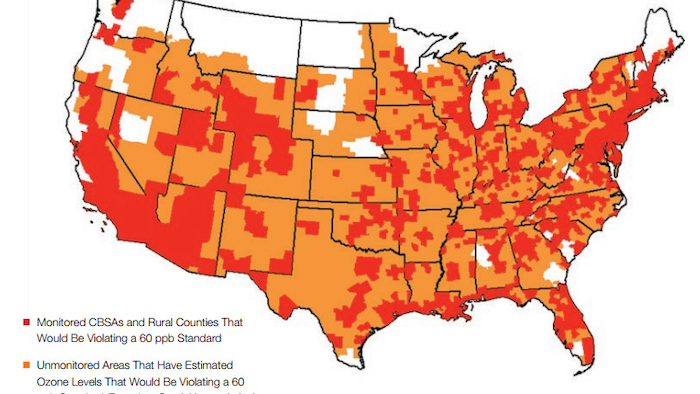 WASHINGTON - A new study by NERA Economic Consulting and commissioned by the National Association of Manufacturers (NAM) reveals that a more stringent ozone standard from the Obama Administration could reduce GDP by $270 billion per year and carry a compliance price tag of $2.2 trillion from 2017 to 2040, increasing energy costs and placing millions of jobs at risk. At this price, the NAM estimates that it would be the most expensive regulation the U.S. government has ever issued.

In total, the study finds that revising the ozone standard from 75 parts per billion (ppb) to 60 ppb could:

"Manufacturing in the United States is making a comeback, and we're reducing emissions at the same time, but tightening the current ozone standard to near unachievable levels would serve as a self-inflicted wound to the U.S. economy at the worst possible time," said NAM President and CEO Jay Timmons. "This rule would undermine our work to expand manufacturing in the United States, making it almost impossible to increase operations, create new jobs or keep pace internationally."

"We are rapidly approaching a point where we are requiring manufacturers to do the impossible," added NAM Vice President of Energy and Resources Policy Ross Eisenberg. "The EPA is considering setting ozone levels below what exists at national parks, such as Yellowstone and Denali. It is vital that the Obama Administration allow existing ozone standards to be implemented rather than move the goalposts with another set of requirements for manufacturers. Trillions of dollars are at stake."

"This study uses the most up-to-date available EPA information and a state-of-the-art model of the economy to assess the compliance costs and economic impacts of a stricter ozone standard, concluding, as the EPA did in 2010, that the costs would be enormous," said NERA Economic Consulting Senior Vice President and Environment Practice Co-Chair Dr.David Harrison. "The EPA needs to greatly expand the scope of its analyses if it is to thoroughly assess the cost and impacts of a revised ozone standard."

President Obama halted the EPA's most recent proposal to modify the federal ozone standard in 2011, citing "regulatory burdens and uncertainty." With so much at stake for the manufacturing sector with new regulatory requirements on greenhouse gas rules and planned ozone rules, the NAM will conduct a broad education campaign in key states during the August congressional recess and throughout the fall to increase understanding of the issue and its impacts on states and municipalities.

To read the executive summary of the study, click here. To view a video message on the new study from Timmons, click here.  For more information, visit www.nam.org/ozone.