From the day its founder arrived here, this Mississippi River town has been tied inseparably to lead, the heavy, dull-gray metal that has been mined in southern Missouri for more than two centuries. As home to the nation's only primary lead smelter, Herculaneum processes raw ore into metal to make car batteries, X-ray shields and many other products. 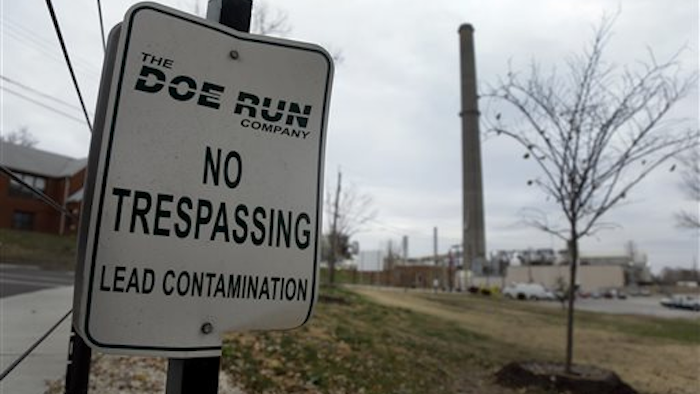 HERCULANEUM, Mo. (AP) — From the day its founder arrived here, this Mississippi River town has been tied inseparably to lead, the heavy, dull-gray metal that has been mined in southern Missouri for more than two centuries.

As home to the nation's only primary lead smelter, Herculaneum processes raw ore into metal to make car batteries, X-ray shields and many other products.

But the end of that long tradition is in sight for the small town 25 miles south of St. Louis that began smelting when this land was still owned by Spain. The company that runs the smelter, Doe Run Co., has decided to cease most operations at the end of the year, citing rising regulatory costs.

Lead has been both kind and cruel to Herculaneum, giving it an identity and ready jobs but also creating environmental and health concerns so worrisome that the federal government designated it a Superfund site and ordered tons of contaminated dirt to be dug up and removed. Many of the town's children were found to have dangerously high lead levels in their blood.

Leslie and Jack Warden won't miss the smelter. For 16 years, the couple lived less than three blocks away, literally in the shadow of the plant's 550-foot smokestack. They raised their son there. Now 29, Eric Warden still suffers from developmental delays — a common effect of lead poisoning.

"I guess living there, you became pretty complacent about the dust, the fog, the smells," Leslie Warden said. "It clung to the house. It was almost like a sticky dust."

The Wardens were leaders of the effort to convince the Environmental Protection Agency to assess Herculaneum's air quality in 2001. That testing was the impetus behind the move to clean up lead in the town known by locals as "Herky."

"We didn't do what we did to shut the plant down," Leslie Warden said. "We wanted the children of Herculaneum to be safe from lead."

Even the town's name seems to evoke a smoky past shaped by earth and fire. Herculaneum is believed to be a reference to a Roman city that was among those buried by the eruption of Mt. Vesuvius. The name was also inspired by the rocky ledges that rise over the Mississippi in a shape suggestive of a Roman amphitheater.

Herculaneum's history dates to 1798, when a settler from Connecticut named Moses Austin obtained a Spanish land grant after learning of the region's mineral deposits. He began mining and producing lead almost immediately.

By the mid-1800s, southeast Missouri was known as the "Lead Belt" for its rich deposits. Herculaneum's standing was enhanced when the St. Joseph Lead Co. picked it as the site for a huge smelter, which opened in 1892 to extract lead from ore.

Lead paint and leaded gasoline were phased out long ago, but lead is still used in many everyday products.

In 1994, St. Louis-based Doe Run bought the operation and with it the risks of a business that was the focus of growing health concerns.

The Centers for Disease Control and Prevention says lead can damage the brain and nervous system, and young children are especially susceptible. Even low levels can cause behavior and learning problems and hearing loss. For adults, lead can affect the nervous system and cause kidney and cardiovascular problems.

The EPA testing showed high levels of air pollution, and more than half of preschool-age children living near the smelter had elevated levels of lead.

Signs soon went up urging parents to keep their kids from playing on streets and in parks. Herculaneum's 3,700 residents were even told not to wear shoes inside their homes.

Doe Run purchased around 150 homes through a voluntary buyout program. The Wardens sold their house in 2004 and moved to nearby Festus.

Today, much of the area around the plant is vacant and fenced-in, with posted warnings about the presence of lead. A few homes still stand near the smelter but most are unoccupied, used only by police and fire departments for training.

In addition to the buyout, Doe Run spent $14 million to remove lead-contaminated soil from nearly 700 properties — mostly residential yards but also school grounds, parks and other land. The contamination came partly from lead that spilled from trucks constantly going to and from the smelter.

After the smelter closes, the company has agreed to spend more than $8 million more for cleanup of the property,EPA spokesman David Bryan said.

The cleanup effort has helped. State testing this year found no Herculaneum children with dangerously high levels of lead in their blood.

"The cost of the factory in the current economic and environmental climate just put the company at too much risk," Hughes said.

The plant will cease smelting at the end of the year but will remain open through 2014 for secondary purposes such as making alloys for specialty customers. About 75 of the 300 workers will stay on, and another 50 have been moved to other jobs, such as mining. Sixteen will retire, but the rest will be out of work. The company set up a career center to help them.

Doe Run, which hopes to find a buyer for the site, will continue mining lead in southern Missouri but will send the ore elsewhere for smelting, primarily to Asia, Hughes said. China is the world's leading lead smelter.

The loss of the smelter will have lasting effects that go beyond jobs. Doe Run helped build a fire station in 2010 and a $6 million bridge last year. The company also funded scholarships, athletic events and other school-related expenses, and its taxes contributed $500,000 in 2012 to the district.

"There were the negatives with the smelter," school Superintendent Stan Stratton said. "But they were always good partners."

Kathleen Logan Smith of the Missouri Coalition for the Environment acknowledged the drawbacks, but said the quality of life will improve.

"For the folks living closest to the plant and the people who have endured lead dust on their streets, their lives are hopefully going to get better," she said. "There's an opportunity to re-envision what Herculaneum is and ought to be."