In an industrial area outside Kenya's capital city, workers in hard hats and white masks take shiny new power drills to computer parts. This assembly line is not assembling, though. It is dismantling some of the estimated 50 million metric tons of hazardous electronic-waste the world generated last year. 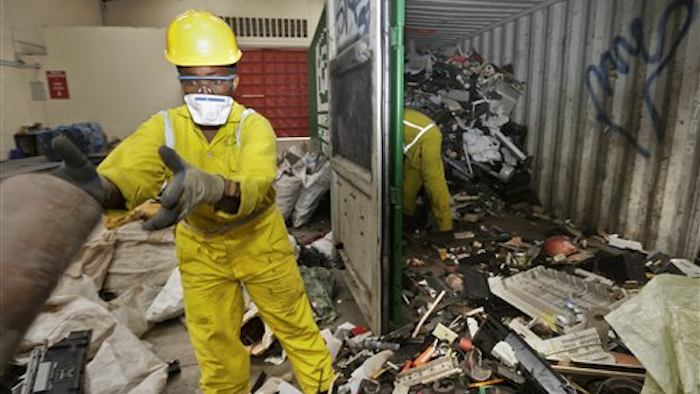 MACHAKOS, Kenya (AP) — In an industrial area outside Kenya's capital city, workers in hard hats and white masks take shiny new power drills to computer parts. This assembly line is not assembling, though. It is dismantling some of the estimated 50 million metric tons of hazardous electronic-waste the world generated last year.

The clanking is rhythmic as the workers unscrew, detach and toss motherboards onto piles of gleaming circuitry at the East African Compliant Recycling facility. Workers wipe hard drives with magnets, shred small appliances, and bundle old cables like bales of multi-colored hay.

Stacks of dingy gray computer towers — some with now-ancient floppy disk drives — cover much of one wall. The cornerstone is a cardboard box labeled "PCs for Africa."

The amount of electronic waste generated globally last year is enough to fill 100 Empire State Buildings and represents more than 15 pounds (6.8 kilograms) for every living person, according to the U.N. Environmental Program. Much of that e-waste is exported to developing countries like India and Kenya in the form of used goods, where it ends up in landfills or is burned, putting lead, arsenic and mercury into the environment.

Kenyan leaders are working on new laws and regulations requiring proper disposal of e-waste, defined as anything with a battery or a cord.

"A lot of e-waste is shipped to these countries in order to get rid of it," said Ruediger Kuehr, the executive secretary of Solving the E-Waste Problem, a Germany-based organization coordinated by the U.N.

Impoverished Nairobi residents collect end-of-life electronics for processing. In Nairobi's Mukuru slum, women pick through dumpsites or purchase discarded material from electronics repair shops. They earn about $2 for a CRT tube-style television. If dumped, that television would have released 6.5 pounds (3 kilograms) of lead into the environment.

"I can say we have already done something good," waste collector Joyce Nyawira said, referring to cleaning the environment.

Some of this e-waste stems from private Western charities donating products near the end of their life cycles, like the box of "PCs for Africa" sitting in the warehouse. Public initiatives like school computer programs also contribute.

"You can imagine if you are giving one kid a laptop, it's very easy for this laptop to die anytime," said Joshua Patroba, operations manager at East African Compliant Recycling, a company in Machakos, about an hour east of Nairobi, that began business in December and has already collected and sold more than 130,000 pounds of e-waste.

East African Compliant Recycling funds its operations by selling high-tech waste to countries like the U.K., China and Hong Kong with the machinery to isolate the precious metals and rare minerals from the scrap. High-grade motherboards can contain platinum, gold and silver. New products also pose a growing problem, as cheap gadgets become more widespread. Kuehr said more e-waste is generated in developing and transitioning countries than in the developed world. The U.N. says that while the world's 7 billion people have 4.5 billion toilets, they also have 6 billion phones.

"Most people, when their phones are dead, they give them to their children as toys, and then the children break them," said Margaret Kamar, Kenya's Minister of Higher Education, Science & Technology. "People get exposed to a lot of dangerous materials that are used when electronic materials are being manufactured."