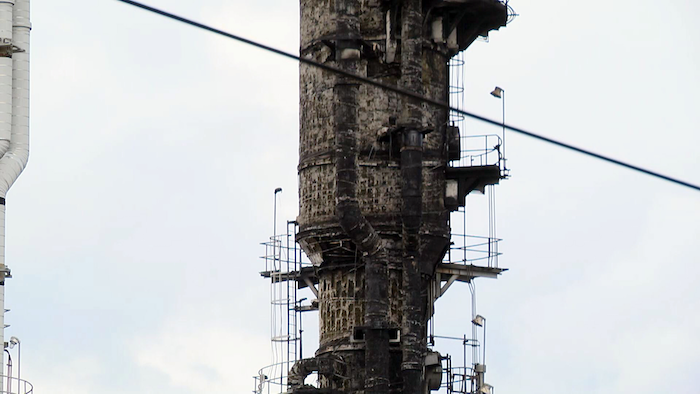 Rick Rainey, a spokesman for Houston-based Enterprise Products Partners LP, said Thursday that the operator can't predict when the Pascagoula plant will restart.

The plant extracts liquids from natural gas, sending the gas to users and the liquids to plants making propane and butane. Because the plant isn't running, some oil and gas platforms in the Gulf of Mexico are limiting production. Some natural gas is being diverted from the Destin Pipeline, which feeds the Pascagoula plant, to another connected pipeline, the Viosca Knoll Gathering System, according to online notices. Gas is then piped ashore for processing in Louisiana. But capacity is limited to 330 million cubic feet per day, below the 400 million cubic feet per day that Enterprise said the plant was handling before the explosions.

Limits on gas transport also can limit oil production from the 12 oil and gas platforms on the Destin Pipeline. Oil and natural gas come up together through wells, and if owners have nowhere to send the natural gas, they can't produce as much oil.

Flames shot from the plant for hours after the explosions last month.

Rainey said the company hasn't completed its investigation into the cause, and is cooperating with inquiries by the U.S. Chemical Safety Board and the U.S. Occupational Safety and Health Administration. OSHA records show an inspection report is pending.

Chemical Safety Board spokeswoman Hillary Cohen wrote in an email to the Associated Press Friday that investigators are still examining the damage at the plant in Pascagoula, and hopes to safely inspect the most heavily damaged area of the plant next week. She wrote that no conclusions have been reached.

"Until our investigation and assessment is complete, Enterprise will not provide information on the cause of the incident nor will we comment on the initial findings of the government agencies," Rainey wrote in an emailed statement. "We are unable at this time to project the date the plant will resume operations."

Enterprise owned a minority of the plant until earlier this year, when it bought the 60 percent that BP PLC had owned.