Iowa Board Votes to Allow Pipeline Work to Begin in State

A Texas company may begin construction on an oil pipeline in areas for which the company has approval but are not under federal jurisdiction. 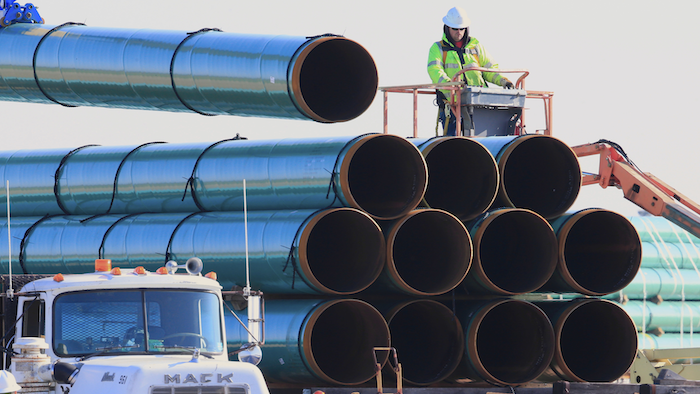 DES MOINES, Iowa (AP) — A Texas company may begin construction on an oil pipeline in areas for which the company has approval but are not under federal jurisdiction, the Iowa Utilities Board said Monday despite opposition from environmental and citizen action organizations and landowners who are suing to stop the project.

The three-member board voted 2-1 to approve an order allowing Dakota Access LLC, a subsidiary of Dallas-based Energy Transfer Partners, to begin laying pipe in areas that aren't among 60 parcels of land for which the U.S. Army Corps of Engineers must issue. Those parcels include river crossings and a recently discovered Native American burial site in northwest Iowa.

Board members Elizabeth Jacobs and Nick Wagner voted in favor of allowing the project to begin. Board chairwoman Geri Huser, who expressed concern last week that the board no longer has legal jurisdiction over the project since several lawsuits have been filed, said she would file a document later Monday explaining her opposition.

Iowa law says once a utilities board decision is appealed to district court, the board can take no further action. To that end, environmental group Sierra Club Iowa Chapter filed a document with the board Monday agreeing with that assessment that alleges the board's action is illegal. The group's attorney, Wallace Taylor, said he may file a legal challenge.

Construction on the 1,150-mile, $3.8-billion pipeline has already begun in Illinois, North Dakota and South Dakota. It will carry oil from northwest North Dakota to a tank storage facility in south-central Illinois.

At least three lawsuits have been filed challenging the board's authority to allow Dakota Access to use eminent domain for the project, including one by the Sierra Club and two separate landowner groups. About 160 landowners have refused to allow the pipeline to cross their land, and Dakota Access has begun condemnation proceedings which prompted several individual landowner lawsuits.

Another complication surfaced Monday involving the Native American burial site. State Archaeologist John Doershuk said in letter filed with the board that the land, which is owned by the U.S. Fish and Wildlife Service, must remain undisturbed, because the site is covered by an Iowa law that maintains burial sites for ancient human remains.

Dakota Sioux tribal representatives met with state and federal authorities Friday to assess the cultural importance of the site, which Doershuk wrote is the traditional homeland for the tribe and of "significant cultural and historical importance to the Upper Sioux Community, Standing Rock Sioux tribe, and other Sioux."

Standing Rock Sioux Tribal leaders told officials late last month of the culturally significant burial site, which may mean rerouting the pipeline. But the board did not discuss Doershuk's letter or the burial site before voting Monday.

"How many other archaeological sites, sensitive natural areas, or rare species will be impacted by the pipeline? We don't know because proper surveys have not been undertaken," Taylor said.

Dakota Access spokeswoman Vicki Granado has said the company would make any adjustments needed to continue the project. She said construction will begin immediately on land for which the company has permission as soon as the order is signed Tuesday; it is not effective until signed.

Pipeline opponents, including Iowa Citizens for Community Improvement and Bold Iowa, rallied in protest Monday afternoon at the Iowa Capitol.

"We're here to demonstrate that this is not a done deal," said Peter Clay, a Des Moines volunteer for the Bakken Pipeline Resistance Coalition. "We absolutely will stop construction of this pipeline wherever we can. We'll make sure no oil ever flows through this pipeline."