A parmesan scandal reported earlier this year highlighted how easy it is to doctor the cheese when it's grated. 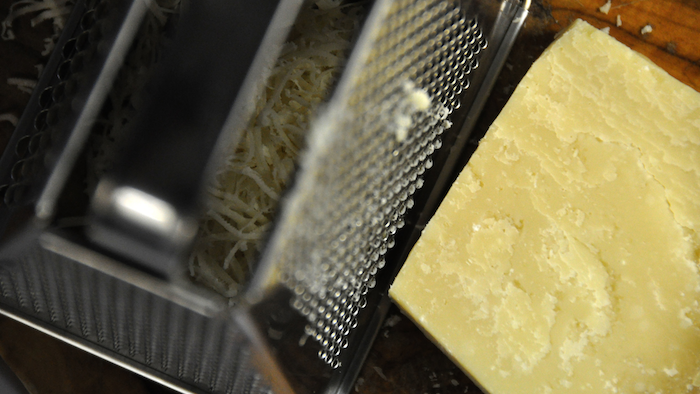 A parmesan scandal reported earlier this year highlighted how easy it is to doctor the cheese when it's grated. For producers and consumers of some of the most expensive kinds, this is a big problem. Generic versions abound, but the traditional variety comes from only a handful of Italian provinces and commands twice the price. Now scientists report in ACS' Journal of Agricultural and Food Chemistry a way to catch adulteration of the regional products.

In February, news stories emerged about grated Parmigiano Reggiano, or parmesan, cheese containing cellulose as a filler and different, less expensive cheeses. One product labeled as 100 percent parmesan reportedly contained none. For consumers interested in artisanal products, this meant there was no way to know what they were getting at the store.

To address this, the European Union established a system to grant a "protected denomination of origin," or PDO, designation to certain products. In the case of Parmigiano Reggiano, cheeses with the PDO label must meet certain requirements. For example, they must be made out of milk from cows that are not fed silage, a fermented cereal product often used in animal feed. Augusta Caligiani and colleagues wanted to see if detecting compounds associated with these diets would be an effective way to determine the authenticity of PDO-labeled parmesan.

The researchers analyzed more than 300 samples of cheeses using a gas chromatography-mass spectrometry method to see if it could help differentiate cheeses from cows fed silage and those that were not. The team found that samples of Grana Padano, a cheese similar to parmesan but made with milk from cows allowed to eat silage, contained cyclopropane fatty acids. However, these fatty acids were not in PDO parmesan samples. The researchers also could tell if a blend of the two cheeses contained 10 percent or more of Grana Padano.

Because the method is simple and fast, the researchers say it could be used in industry to screen large numbers of samples for potential adulteration.