EPA Chief: US Needs a Single Standard for Fuel Efficiency

The acting head of the Environmental Protection Agency said Tuesday that the United States needs a single standard for fuel efficiency for cars and trucks, signaling a possible showdown with California and other states that could throw the car market into turmoil. 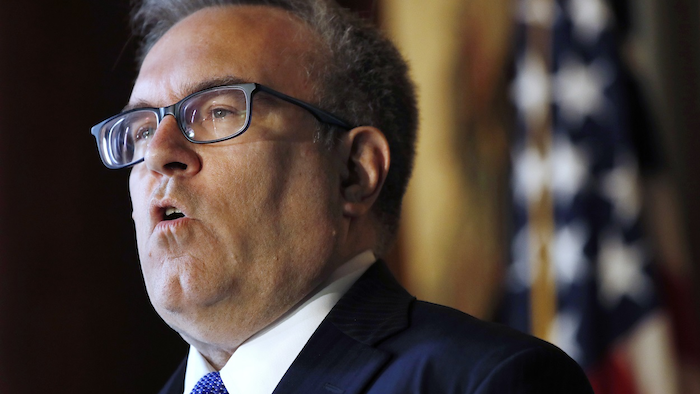 The acting head of the Environmental Protection Agency said Tuesday that the United States needs a single standard for fuel efficiency for cars and trucks, signaling a possible showdown with California and other states that could throw the car market into turmoil.

Andrew Wheeler spoke to a small group of reporters at EPA headquarters, ahead of a Trump administration proposal that's expected to freeze some future Obama-era mileage goals. The Trump administration also has said it's looking at challenging California's authority to set its own, tougher mileage standards.

"What we don't want to see is two different standards for the country," Wheeler said, calling for a "50-state solution" to disputes over mileage standards.

A program for steadily increasing fuel efficiency rules was a key part of the Obama administration's effort to combat climate-changing emissions from fossil fuel.

California has had the authority under the half-century-old Clean Air Act to set its own standards, with a special rule allowing the state to curb its chronic smog problem. More than a dozen states follow California's standards, making for a significant part of the country's car market.

Wheeler said he was committed to sitting down with California officials after the Trump administration releases its proposals, expected as soon as this week.

"We certainly want to work with the state of California to make sure they're comfortable with the direction the government wants to go," he said.

A draft of the EPA proposal obtained last spring by Democratic Sen. Tom Carper of Delaware said the Trump administration was considering freezing the fuel standard at 2020 levels for the next five years. Under the proposal, the fleet of new vehicles would have to average roughly 30 mpg in real-world driving, and that wouldn't change through at least 2025.

The Obama administration had proposed tougher standards — 36 mpg by 2025. California and automakers agreed to the rules in 2012, setting a single national fuel economy standard.

California has joined 16 other states and the District of Columbia to sue the EPA to try to block any weakening of the standards.

Wheeler spoke favorably about two policy issues inherited from Pruitt. One was an initiative to bolster consideration of costs in making some regulatory decisions. The other was a sweeping proposal to change what science the EPA considers in making regulations by giving the agency's chief the option to disregard scientific studies if the underlying data supporting it is not made public. Supporters say that would increase transparency in EPA rulemaking.

Public hearings on the proposals have drawn mainly opponents, including scientists and health officials who say the change would throw out bedrock public-health studies that draw on confidential data on individual patients.

"I very much believe in both of those" as far as transparency and consideration of costs and benefits go, Wheeler said.

On the broader rule, "I think we can balance two competing public policy goals" for patient confidentiality and transparency, he said. "There's got to be a way of threading that needle," he said.

Crafting the final form of the rule on studies would happen after the period for public comment ends, Wheeler said. "I'm not positive what the final regulation" will look like, he added.

Wheeler pledged to work with all sides in a policy issue that bedeviled Pruitt — a dispute between corn growers and oil and gas refiners over how much corn-based ethanol that refineries have to blend with petroleum.