Pruitt Acts to Yield Some EPA Power Over Mining, Development

Environmental Protection Agency head Scott Pruitt is proposing surrendering some of his agency's veto power over waste discharges near waterways by mining and development. 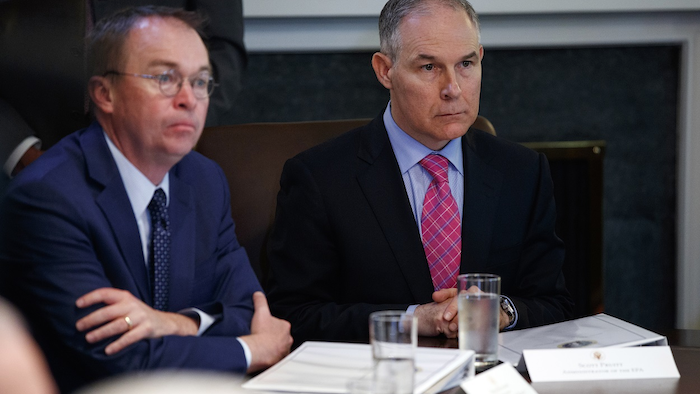 Environmental Protection Agency head Scott Pruitt is proposing surrendering some of his agency's veto power over waste discharges near waterways by mining and development.

In a memo released Wednesday by the EPA, Pruitt directs the agency to study renouncing part of its authority under the half-century-old Clean Water Act to veto permits that the U.S. Army Corps of Engineers or states grant to allow dumping waste into waterways.

Pruitt's proposal would eliminate his agency's authority to exercise its veto before permits are applied for or after the Corps or states approve them.

His memo cites an Obama-era action by the EPA, when the agency signaled that it might object to some dumping of mine waste for a proposed gold and copper mine in Alaska. Conservationists, Alaska Native tribes and fishing groups say the still-pending Pebble Mine could harm one of the country's top salmon fisheries and valuable wetlands.

"The mere potential" of an EPA veto "before or after the permitting process could influence investment decisions and chill economic growth," Pruitt wrote.

The Trump administration says it wants to invigorate the country's mine industry, including by opening up more land to development.

Pruitt's proposal also would require the agency's regional offices to seek approval from headquarters before moving to veto a permit, and it directs the agency to consider a final environmental report by the Corps or a state, and seek public comment, before deciding on any veto.

Kyla Bennett, a former EPA official now with the Public Employees for Environmental Responsibility nonprofit, said the proposal would weaken one of the few tools the agency has when it comes to limiting environmental harm from mining and other development around waterways.

"He doesn't want to chill the economy? That's not EPA's job," Bennett said.

The proposal was meant to benefit the interests "he's always concerned with: oil and gas and mining," Bennett said. "His buddies who make money."

Senate Republicans introduced legislation this month to similarly limit the time frame for when the EPA could veto one of the permits. Republican Sen. John Barrasso of Wyoming, chairman of the Senate Committee on Environment and Public Works, praised Pruitt's step.

"In the past, the agency has sent mixed messages to companies seeking permits," Barrasso said in a statement. "Today's action is the first step to stop the agency from unfairly using the permitting process to slow projects."

Pruitt's readiness to slash regulations that he and President Donald Trump see as burdensome to business has helped him retain GOP support despite a series of federal investigations into allegations he has abused his office for costly perks like round-the-clock security and for personal gain. Pruitt is due to appear before Barrasso's committee in August to answer lawmakers' questions on ethics allegations.

Pruitt gave the EPA's Office of Water six months to draft his proposals into a rule to send to the Office of Management and Budget for review.