Canadian Prime Minister Justin Trudeau said his nation will not be pushed into any NAFTA redo that does not benefit Canada. 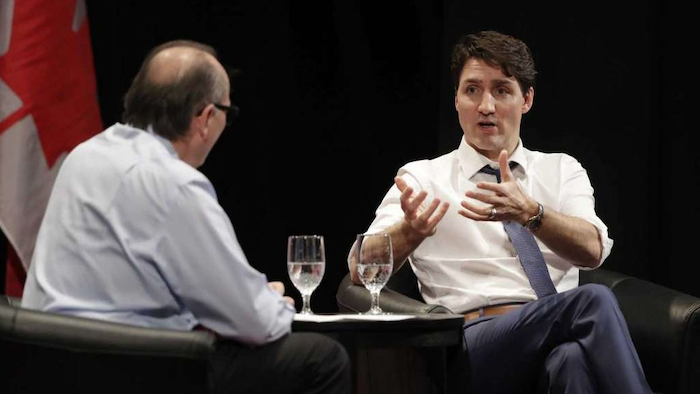 Canadian Prime Minister Justin Trudeau on Wednesday said his nation will not be pushed into any redo of the North American Free Trade Agreement that does not benefit Canada.

Speaking at the University of Chicago's Institute of Politics, Trudeau said Canada will engage "thoughtfully and constructively" in talks with the U.S. and Mexico.

President Donald Trump has threatened to withdraw from the 24-year-old pact if he can't get what he wants. Among his desires is requiring more made-in-America auto production and shifting more government contracts to U.S. companies.

Trudeau said he has deep concerns about Trump's demands, saying he is generally opposed to anything that creates instability in the supply chain. He said his nation will not be pushed into any old deal, adding that it may be that "no deal is better for Canada."

Last month, U.S. Trade Rep. Robert Lighthizer said talks to rewrite NAFTA are progressing very slowly. Lighthizer said there will be another round in Mexico in late February and that core issues are starting to be discussed.

Trudeau said Canada has a stake in a thriving U.S. economy. He noted the two nations' economies are so interlinked that Canada wants a good deal with the U.S.

The prime minister conceded there has been "a lot of grumbling'" about trade, adding that the economies of Canada, the U.S. and Mexico have thrived over the nearly 25 years of NAFTA.

"At the same time, we need to improve NAFTA," he said. "We have to make sure we are sharing the benefits of trade and the opportunities that come with it with families."

Lighthizer has said the Trump administration's goal is to boost the number of manufacturing jobs in the United States, either by encouraging new investment or by bringing back jobs that had moved to Mexico.

Trudeau contended that if the labor standards of NAFTA are improved, it would remove incentives for companies to move factories to Mexico for cheap labor and improve wages.

After Chicago, Trudeau is scheduled to make stops in California. In San Francisco, he's set to meet with local business leaders and entrepreneurs. And in Los Angeles, he'll speak at the Ronald Reagan Presidential Foundation and Institute.