Toshiba Board Decides On Chip Sale To Bain Capital Group

Toshiba has been battered by massive losses related to its U.S. nuclear operations at Westinghouse Electric Co., which filed for bankruptcy earlier this year. 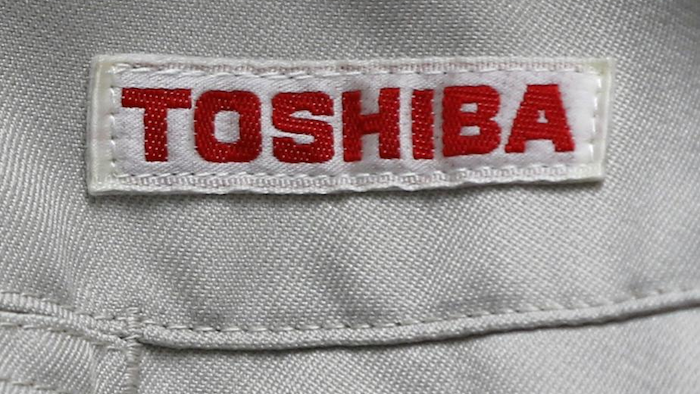 In this Thursday, June 15, 2017, photo, the logo of Toshiba Corp., Japan's electronics and energy company, is seen on a worker's jacket in Yokosuka, near Tokyo. Tokyo-based Toshiba, whose U.S. nuclear unit Westinghouse Electric Co. filed for bankruptcy protection in March, said Friday it received an extension until Aug. 10 to give its earnings report for the fiscal year that ended in March. (AP Photo/Shuji Kajiyama, File)

Toshiba's board signed off Wednesday on selling its computer chip business to a group led by Bain Capital Private Equity, but the deal's future remains unclear as Toshiba's U.S. joint venture partner Western Digital opposes it.

Japanese electronics and nuclear company Toshiba Corp., which needs the sale to survive, said it hopes the deal, estimated at 2 trillion yen ($18 billion), will close by the end of next March.

Toshiba announced last week that it has entered into an agreement with the Bain Capital group. But Western Digital immediately said it opposed the sale of the NAND flash-memory SanDisk joint venture, stressing it will continue with legal action.

Toshiba has been battered by massive losses related to its U.S. nuclear operations at Westinghouse Electric Co., which filed for bankruptcy earlier this year. Its decline, including earlier scandals centered on inflated bookkeeping, is one of the most dramatic downfalls of a major Japanese company long known for quality.

The chosen consortium also includes South Korea's SK Hynix and other Japanese and foreign companies, and 350.5 billion yen ($3.2 billion) will be invested to stabilize the chip business operations, Toshiba said in a statement. The deal will go through regardless of the legal wrangling with Western Digital, it said, without elaborating.

Toshiba's massive red ink began with reactors it has been building in the U.S. which are still unfinished, partly because of beefed-up safety regulations following the 2011 Fukushima nuclear disaster.

Toshiba's earnings reports initially failed to get endorsements from its auditors, meaning that it could have been delisted.

But the auditors finally signed off in August after an investigation that centered on whether Toshiba had known in advance about the losses that emerged related to Westinghouse's acquisition of CB&I Stone & Webster, a nuclear construction and services business.

Toshiba has sunk deep into the red, although it is promising to return to the black for the fiscal year ending in March 2018.

Toshiba, whose sprawling business included everything from TV sets to high-speed trains, faces the main responsibility of keeping under control and decommissioning the Fukushima Dai-ichi nuclear plant in northeastern Japan. Three reactors there suffered meltdowns after a massive earthquake and tsunami in 2011.