The Colonial pipeline provides nearly 40 percent of the region's gasoline and usually runs at or near full capacity. 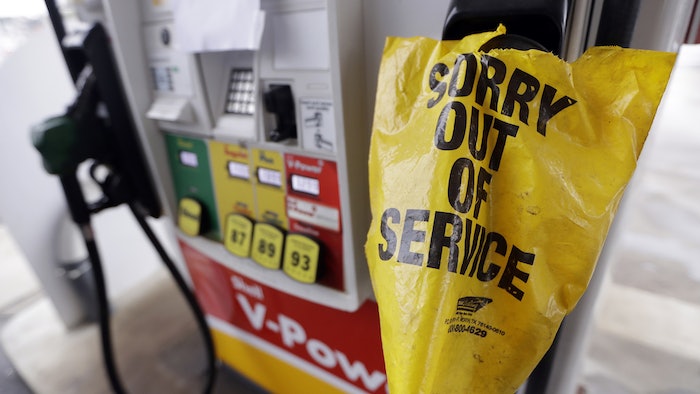 Fuel supplies in at least five states are threatened by a gasoline pipeline spill in Alabama, and the U.S. Department of Transportation has ordered the company responsible to take corrective action before the fuel starts flowing again. (AP Photo/Mark Humphrey)

Motorists in the Southeast and East could pay more for gasoline in coming days because of the shutdown of a leaking pipeline in Alabama.

Experts say, however, that any spike in service-station prices should only be temporary.

Colonial Pipeline Co. said Friday that it doesn't expect to fully reopen its primary gasoline pipeline until next week.

It is one of two major pipelines that connect more than two dozen refineries in Texas and Louisiana with cities in the East, from Atlanta to New York. The Colonial pipeline provides nearly 40 percent of the region's gasoline and usually runs at or near full capacity.

Prices on futures contracts for wholesale gasoline rose about 2 percent Friday to $1.46 a gallon after rising 5 percent on Thursday.

Tom Kloza, an energy analyst with the Oil Price Information Service, said some stations in the Southeast could run short on supply and boost their prices by 20 or 30 cents a gallon.

"The Colonial pipeline is the metaphorical aorta for the supply to the most-populated regions of the country, and you've lost 10 days of blood flow," Kloza said. The good news, he added, is that the disruption comes at a time when gasoline prices are down sharply from a couple years ago.

If prices rise, the effect could be felt the hardest in Tennessee, which is supplied by a spur off the leaky pipeline.

Trade groups for service stations and convenience stores in Tennessee assured consumers that the pumps won't run dry. They said fuel wholesalers were hauling gasoline in from fuel terminals and refineries that don't depend on the downed pipeline.

"Tankers are just having to drive farther to get the fuel," said Emily LeRoy, executive director of the Tennessee Fuel and Convenience Store Association.

Pump-price increases should be smaller in the Mid-Atlantic, Kloza said, because any shortfall from the shutdown of the Colonial pipeline could be made up within about 10 days by tankers arriving from Europe.

Jim Ritterbusch, who advises energy investors, said the surge in gasoline futures was exaggerated. A large surplus of gasoline in the central-Atlantic region should have cushioned the blow of the pipeline accident, he said.

By the end of September, the bulk of the price spike should be erased as higher prices attract more supply to fill the void, he wrote in a note to clients.

Georgia-based Colonial Pipeline estimated that the pipeline rupture near Birmingham has spilled 252,000 to 336,000 gallons of gasoline, most of which was corralled in a retention pond. The company downplayed any threat to public safety.

It is not clear when the leak started. It was detected Sept. 9. Colonial said work crews would begin excavation work Friday and repairs would continue through the weekend. Workers might put up a temporary stretch of pipeline around the leak, the company said.

Colonial said it was making up some of the gasoline shortfall by using another pipeline that usually carries diesel and jet fuel. The company said fuel shippers were also sending tankers to supply markets along the East Coast.