Oil companies will be given credits that can be traded to offset times when targets are unmet. 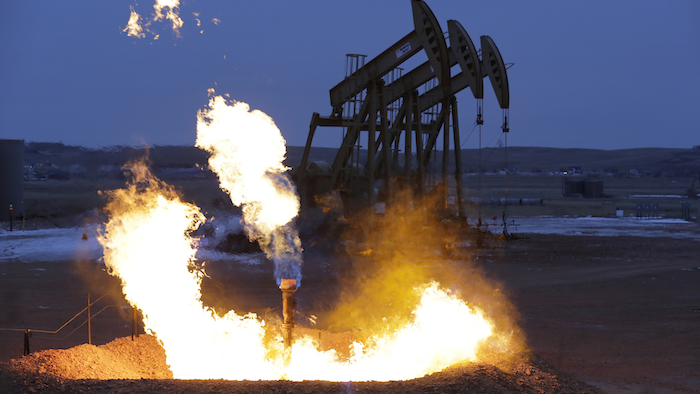 Oil companies that exceed goals meant to curb the wasteful burning of natural gas will be given credits that can be traded to offset times when targets are unmet, North Dakota regulators decided Thursday.

North Dakota's Industrial Commission, a three-member Republican panel headed by Gov. Jack Dalrymple, approved the plan at a meeting in Watford City, which is in the heart of the state's oil patch. It marked the second time in a month that the commission has relaxed self-imposed industry rules aimed at reducing the amount of natural gas that's burned off as a byproduct of oil production. In September, the panel, which also includes Attorney General Wayne Stenehjem and Agriculture Commissioner Doug Goehring, gave the oil industry an additional 10 months next year to cut down on the reduction of flaring but also implemented a stiffer long-term benchmark.

"Again, they're making it much easier for oil companies to continue flaring," said Wayde Schafer, a spokesman for the North Dakota chapter of the Sierra Club.

State Mineral Resources Director Lynn Helms has called the flaring credits a "reward system for people who are going above and beyond." The credits, which may only be used under certain circumstances such as gas pipeline maintenance cannot be sold or transferred to another company. They also only can be banked for three months.

North Dakota, the nation's No. 2 oil producer behind Texas, is producing about 1.1 million barrels daily. The state also is producing a record 1.6 million cubic feet of natural gas daily that comes when an oil well is drilled. About 20 percent of the natural gas is currently burned off in North Dakota because the infrastructure isn't there to get it to market. Less than 1 percent of natural gas is flared from oil fields nationwide.

"Providing rewards to companies that are still flaring at 20 times the national average doesn't make sense if you are serious about reducing flaring," Schafer said.

The Industrial commission adopted the rules last year to reduce flaring to less than 90 percent in incremental steps through 2020. The rules, which were drafted by the oil industry, allow regulators to set production limits on oil companies if the targets are not met.