With 615,000 acres of wine grapes in California, industry trends in water use clearly have an impact. 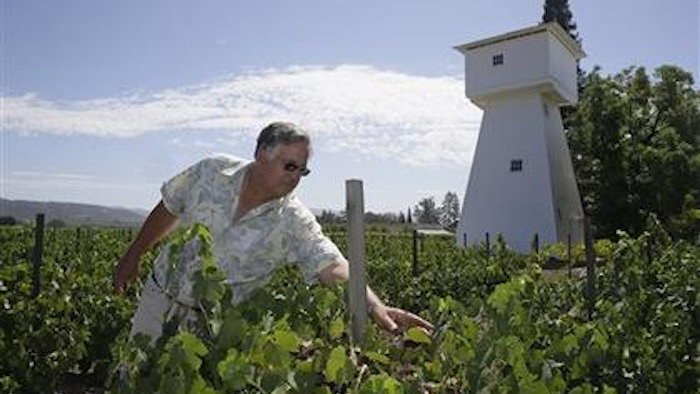 The grape vines that grower Frank Leeds tends in Napa Valley stand among the unheralded heroes of California's drought, producing decade after decade of respected Cabernets and other wines without a drop of added water.

In a state where farms and dairies take the biggest gulp of the water supply, Leeds and the owners of his Frog's Leap Winery are among a minority — but a growing minority — of California growers and winemakers who believe that when it comes to wine grapes, the less irrigation, the better.

"This is not struggling, skinny, tiny grapevines, right?" Leeds asked proudly earlier this growing season while leading a tour through the dry-farmed rows of wine grapes.

Frog's Leap's vines stood several feet apart from each other, giving the roots plenty of room to plunge into the soil and find moisture. Just across a narrow country road, black tubing of drip irrigation laced through another vineyard's grape vines, more crowded but looking no less bountiful than their un-watered neighbors at Frog's Leap.

Wine grapes, California's No. 3 cash crop, in general are far less thirsty than the state's No. 2 cash crop, almonds. But with 615,000 acres of wine grapes in production in California, wine industry trends in water use clearly have an impact on the overall water supply.

As wine growers close out harvest this month, California is ending a fourth year of severe drought, with mandatory cutbacks in water for cities and towns statewide, and for many farms.

Overwhelmingly, the debate in California's wine industry over water use is driven by what's best for the quantity and quality of the grape crop, more so than conservation.

All sides — the irrigated, the unirrigated, and the in-between — feel strongly that their way is the right way.

For Marc Mondavi, a third-generation producer in one of California's most influential wine families, it only makes sense that grapes thrive best with an occasional sip of running water.

"I always tell people, I give them a little scenario: They put you and I in the middle of the Mojave Desert," in a foot race, Mondavi said. "Who's gonna run the distance? More than likely the person who's had some water" to drink along the way.

In the early days of California winemaking, as in parts of France and Spain today, all wine was dry-farmed.

At the famed 1976 Judgment of Paris wine-tasting, which showed the world that California wines could meet or surpass French wines, some of the Napa Valley samples were dry-farmed, meaning they received no water beyond the 25 inches of rain that fall in Napa County during an average year.

"California producers in particular really wanted to control nature," said George Taber, a long-time wine writer. "They realized they could have less acreage and greater production if they put their vines closer together and turned on the water."

These days, the large majority of California's vineyards are irrigated. That's especially true in California's dry Central Valley, where many of the wine grapes for the unmonied masses are produced.

Even in the lusher Napa and Sonoma valleys, home to many of the wines that define California's industry, irrigation today is more the rule.

The fear driving irrigation for some vineyards — the "r'' word.

"I do know that (various) wineries have a preference, but the overarching preference is that the fruit is sound and it arrives at the winery not shriveled up as a raisin," said Rhonda Smith, a viticulture farm adviser in Sonoma County.

If dry-farming is haunted by the specter of raisins, the counterpoint is what wine critic and reporter Eric Asimov in 2008 dubbed Napa Valley "jammy fruit bombs " — higher-alcohol, unsubtle wines from some irrigated grapes.

To get the water right, more and more producers, including Mondavi, use a range of high-tech moisture sensors.

And nearly a third of wine-growers are going further, ramping back watering in the belief that "deficit irrigation" generally produces better wine, said Joel Peterson, a noted winemaker at Sonoma Valley's Ravenswood winery.

With less water, judiciously applied, the vines "will do exactly what they're supposed to do" to produce the best grapes possible, Peterson said.

Ultimately, dry, wet or in-between, "it's just a matter of your farming husbandry," Peterson said. "Honestly, I think you can grow grapes either way."

For Leeds and other dry-farmers in the Sonoma and Napa valleys, dry is the way to go, whether California's winter rain and snow come back or not.

Dry-farm and deficit growers believe deeper roots give the grapes their taste of terroir, or place.