Dozens of drums of used motor oil exploded in a large fire Wednesday at a solvent recycling company, spewing fireballs and blackening the sky south of downtown Phoenix for more than an hour. 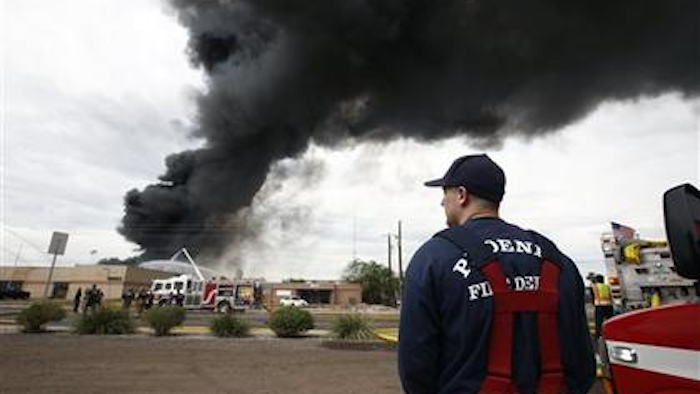 Dozens of drums of used motor oil exploded in a large fire Wednesday at a solvent recycling company, spewing fireballs and blackening the sky south of downtown Phoenix for more than an hour.

Some planes taking off from the city's airport had to fly around the mushrooming black plume.

There was no immediate word on what started the blaze in a storage area lined with large 55-gallon tanks of motor oil and solvents used to clean auto parts. The area also contained a 4,000-gallon tank of motor oil.

The 55-gallon drums heated up and exploded, with several flying into the air as projectiles, fire officials said. Officials didn't know if the 4,000-gallon drum exploded, Subervi said.

The smoke caused no flight delays at Phoenix Sky Harbor International Airport. But Federal Aviation Administration officials said some planes were instructed to fly farther to the west on takeoffs before making their turns to avoid the smoke.

A convenience store and other businesses near the fire were evacuated as a precaution, affecting about 100 people, Subervi said.

There was no immediate word of any injuries, according to Subervi. He said he wasn't aware of any past fires at the Solvent Recy-Clean company.