With little time and opposition from oil interests, Gov. Jerry Brown and legislative Democrats were forced on Wednesday to retreat from their ambitious proposal to address climate change by. 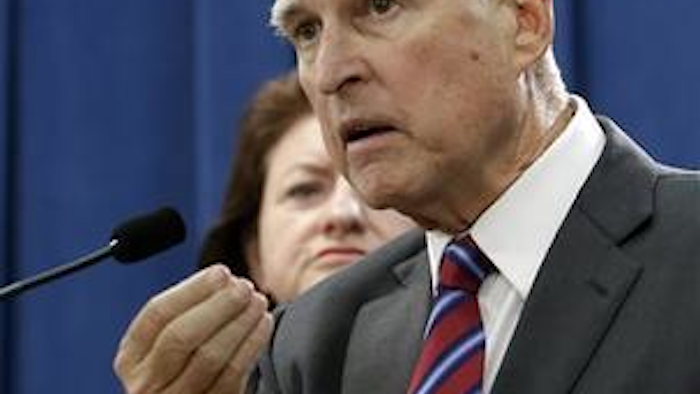 With little time and opposition from oil interests, Gov. Jerry Brown and legislative Democrats were forced on Wednesday to retreat from their ambitious proposal to address climate change by dropping a key mandate to cut California's petroleum use by 50 percent.

Amid the political setback, they vowed to intensify their fight to reduce greenhouse gas emissions through other means and pledged to continue to champion the environmental cause for the good of future generations. Brown, a Democrat who has made climate change the centerpiece of his final term, said state regulators will announce toughened reporting rules on low-carbon fuel standards as early as next week.

"I'd say oil has won the skirmish, but they've lost the bigger battle," Brown said. "Because I'm more determined than ever to make our regulatory regime work for the people of California — cleaning up the air, reducing the petroleum and creating the green jobs that are going to put hundreds of thousands of people to work."

Brown and Senate President Pro Tem Kevin de Leon, a Los Angeles Democrat, had pushed a far-reaching proposal to cut petroleum use by half, boost renewable-electricity use to 50 percent and double energy efficiency in existing buildings. They dropped the mandate to cut oil use from their proposal, SB350, amid fierce opposition from business groups and oil companies that sought to strip a powerful state regulatory board from setting vehicle emissions and fuel standards.

Many Democrats — including moderates and those representing less wealthy districts — were concerned that the petroleum mandate would hurt California's economy and working-class residents. They wanted greater oversight of the air board that has been in charge of implementing California's ambitious greenhouse gas emissions law signed by Gov. Arnold Schwarzenegger, a Republican.

"Today's announcement was an acknowledgement that California's energy future, economic competitiveness, and environment are inextricably linked," said Catherine Reheis-Boyd, president of the Western States Petroleum Association. "Californians are best served by inclusive energy policy and by a legislative body that retains authority on issues so critically important to jobs, communities and our way of life."

Sen. Fran Pavley, D-Agoura Hills, who is carrying companion legislation to extend California's current emission-reduction targets to 2050, said she's still evaluating the effect of SB350 on her own proposal.

De Leon said that despite their best efforts, supporters could not overcome "the silly season scare tactics" of the oil industry. "We couldn't cut through the multibillion-dollar smoke screen created by big oil with a bottomless war chest," he said.

Brown said the primary sticking points for moderate Democrats in the state Assembly concerned the California Air Resources Board, an unelected body with broad power to set vehicle emissions and fuel standards to decide how the state will reduce oil use.

The governor said opponents agreed to pass the legislation if he agreed to dramatically scale back its power, but he refused.

A fiery Brown said that he and the two Democratic leaders did not cave in to calls to scale back state authority to set emission rules.

"The only thing different is my zeal has been intensified to a maximum degree and nothing, nothing is going to stop this state from pushing forward" on aggressive climate change standards, he said.

"I think that was the most problematic component of SB350 because it hit everybody in ways we don't even know, how technologically we were going to accomplish the goal," Huff said in an interview.

Brown has campaigned on climate change this year, discussing it with the pope at the Vatican in July. He is expected to attend the United Nations climate change conference in Paris in November.

He said the intense debate surrounding the legislation may have actually helped the cause of climate change legislation in the long term.

The governor and legislative leaders also announced Wednesday that they would need more time to reach a deal to increase transportation funding.