President Obama and his allies on trade are thinking of restarting their legislative push. 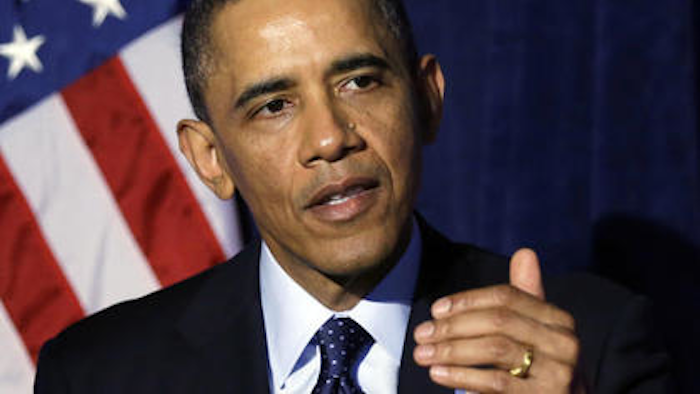 President Barack Obama and his Republican allies on trade are thinking of restarting their legislative push in the Senate. It's testament to a crucial miscalculation they made months ago.

The White House and GOP leaders had assumed that congressional Democrats' eagerness to renew a job retraining program would trump their opposition to the "fast track" negotiating authority Obama seeks.

So they packaged both provisions into one bill. The Senate passed it, and then the House ambushed it.

House Democrats wanted so badly to kill fast track that they sacrificed the job training program for workers displaced by trade, which they had long

supported. Pro-trade lawmakers couldn't unlink what they had linked, and no one has figured a way out of the jam.

Now Obama and his allies are considering something they had desperately hoped to avoid: Restarting trade legislation in the Senate. It would give Senate opponents another chance to strangle the legislation with costly delays and other tactics.

"I thought it was queued up pretty well," Griffin said. "The real surprise was the power of the interest groups" opposed to fast track, he said, "and that not many Democrats wanted to take a tough vote" against those groups.

Fast track authority would let Obama propose trade agreements that Congress could reject or ratify, but not change.

He is pushing for a landmark deal with 11 other Pacific Rim nations. Democrats and Republicans agree it can't proceed unless Obama gets fast track authority, which previous presidents have enjoyed.

Over the years, the two initiatives were often twinned, to build bipartisan support. That strategy collapsed last week in the House.

Lawmakers said other options remain possible. And they said the Senate-restart plan would face serious hurdles in both chambers.

If they do so and then face a primary challenger, he said, "I can promise you your opponent is going to be all over that." Lawmakers can explain their switches, Roe said, but in a campaign, "if you're explaining, you're losing."

Still, Democratic Rep. John B. Larson of Connecticut — who supports TAA and opposes fast track — said it makes sense to split them into separate bills that can seek different sources of support. "I don't know why they combined them in the first place," Larson said.

Sen. Sherrod Brown, D-Ohio, said he was hearing "a bunch of rumors." He said the trade legislation is stymied because Obama, GOP leaders and big corporations "are trying to jam something through Congress that the public doesn't want." He said he didn't know if Senate opponents could block it.

There clearly was urgency behind Tuesday's rescue effort, as pro-trade Republicans and the Obama administration desperately want to salvage a sweeping international trade pact this year. Any delay could threaten completion of the 12-nation Trans-Pacific Partnership, which officials hope can be signed at a November summit in the Philippines.

If one house doesn't act until late July, when Congress' August break looms, the other chamber couldn't act until the fall. That could push final approval of any trade deal into December or January, when the U.S. presidential race will be hurtling toward the first caucuses and primaries.

"It does get harder to complete a trade agreement in a presidential year," said Matthew Goodman, a former Asia and economic specialist at the White House during Obama's first term.

Failure to give Obama fast track authority would raise serious doubts in Asia about U.S. credibility and staying power in a part of the world where Obama has been trying to boost U.S. influence, Goodman said.

"This would be a devastating blow not only to President Obama's legacy but also to broader U.S. interests in the Asia-Pacific region," said Goodman, now a senior adviser at the Center for Strategic and International Studies.