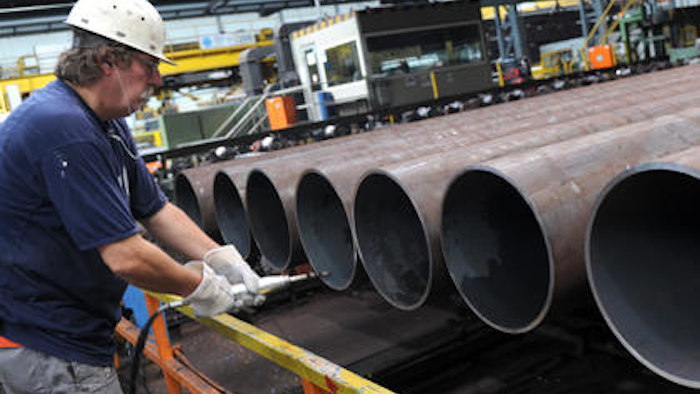 Manufacturing has a publicity problem. Simply put, people don’t seem to perceive it as they should and it is beginning to effect participation rates. According to the Manufacturing Institute and Deloitte, the skills gap in the manufacturing sector is only widening and even with lucrative career paths, the younger generation seems less than inclined to join.

The Skills Gap in U.S. Manufacturing 2015 and Beyond study lays out some startling figures on the state of the workforce. For example, 84 percent of executives agree there is a talent shortage in U.S. manufacturing, and six out of ten open skilled production positions remain unfilled because of labor shortages. This is while 80 percent of manufacturing companies offer more competitive pay than market rates.

READ MORE: How Do We Keep Students in STEM?

Over the next decade, there will be nearly 3.5 million manufacturing jobs added and 2 million of those will remain unfilled. When positions remain empty, output suffers. Between 2004–2012, it is estimated that the U.S. manufacturing sector lost between $9 and $25 billion per year in output because of open positions. But why is this happening when 90 percent of Americans believe that manufacturing is crucial to the economy? Why are so few electing to participate?

Manufacturing Day has been developed in order to address some of these concerns. The idea for a day dedicated to shining the spotlight on manufacturing sprung from a conversation between Ed Youdell, the President and CEO of the Fabricators & Manufacturers Association and a colleague from the National Institute of Standards and Technology.

“We were talking about creating an open house day at the Manufacturing Extension Partnership Program centers throughout the country,” explains Youdell. “From there the idea hit me: the need was bigger than that. Why don’t we create Manufacturing Day? With the skilled labor shortage, the biggest thing we need to do is to have people at least consider manufacturing as an opportunity for a family-supporting career. And we thought this was a way to start allowing manufacturers to open their doors to their communities, their schools, their legislators. If we could get people inside plants to see what goes on, then we could start to change the perception of what modern manufacturing is and what it isn’t.”

That was three years ago, and with that spark, Youdell has been able to ignite something truly brilliant. After the initial idea, he began to gather support. “We couldn’t do Manufacturing Day ourselves, so we invited the National Association of Manufacturers to partner with it,” says Youdell. “They loved it, jumped on board and invited all their members to participate. Then we invited the Manufacturing Institute, who rounded out our four sponsors for the first event.”

From there, they set about creating a day dedicated to the goal of showing the value of manufacturing to local communities in whatever way local manufacturers see fit. The day is made up of open houses across the country and consists of whatever the manufacturer wants it to be. Events might include a factory tour, live demonstrations or even a barbeque.

“The manufacturer knows best what would work in their community,” explains Youdell. “The key is just holding the event, opening the doors and letting people inside so we can start changing people’s perception about manufacturing.”

The reshaping of people’s construct of what it means to be in the manufacturing sector is crucially important right now. Only one in three parents surveyed by Deloitte Development LLC and the Manufacturing Institute reported that they would encourage their child to pursue careers in manufacturing. They also reported that only 50 percent of Americans believe manufacturing jobs can be interesting and gratifying. This perception needs to change — and Manufacturing Day is part of the change.

That first year of Manufacturing Day consisted of 240 registered events — and it has only grown since. In its second year there were 850 events, and last year had 1,679 registered events. In fact, last year participation goals for the event were greatly exceeded. Events were held in all 50 states, three Canadian provinces and Puerto Rico. The holiday also expanded to host virtual events. For example, Discovery Education and Alcoa hosted a virtual field trip to Alcoa Davenport — an aluminum manufacturing plant — where participants could see where the wings for Air Force One are built and could get a glimpse of the new technology being used to make cars lighter and more fuel-efficient. This event boasted more than 100,000 student participants. It was also calculated that over 260,000 people participated in more traditional live events. One of those people was President Barack Obama, who, after participating, declared October 3, 2014 officially Manufacturing Day.

“With ingenuity and a determined spirit, hardworking Americans are creating products and unlocking new technologies that will shape our Nation and grow our economy. On National Manufacturing Day we celebrate all those who proudly stand behind our goods and services made in America, and we renew our commitment to winning the race for the jobs of tomorrow,” said President Obama during his proclamation.

Sponsors, partners and producers of the event have increased each year as well. For example, the event has partnered with Discovery Channel in affiliation with their show How It’s Made.

“They run a How It’s Made marathon on Manufacturing Day so that if you can’t find an event close to you on our website, you can still learn about manufacturing by sitting down in front of your television,” explains Youdell. “That lets you start to wonder about what it’s like to work with your head and your hands, and to have the power to create things.”

The battle to encourage participation from the younger generation isn’t without its challenges, however. Youdell explains that some of the biggest problems in getting younger minds interested in manufacturing are systemic.

“If we look at our education system, there has been a shift to a more college prep oriented system,” he offers. “For a number of reasons, we no longer have shop programs or vocational programs in schools so the opportunities for people to start to learn about working with their hands isn’t as present.”

Youdell goes on to explain that more recognition and support for those programs will be helpful in driving students toward manufacturing. But it is also the manufacturer’s responsibility to entice a new generation of workers. Manufacturing Day is a tool for them to do so. It is a day where they can open the doors, dispel the myths around manufacturing and show students and their communities just how gripping and vital of an industry it is.

“I could see a point where we could have 5,000 to 10,000 manufacturers participating,” says Youdell. “I anticipate that at some point — in maybe ten years — we could reach that point.”

Manufacturing is the backbone of the U.S. economy, and it needs some of the best and brightest to fill its ranks, so make sure you don’t forget to mark October 2 — Manufacturing Day — on your calendar this year.

For more information on Manufacturing Day, or to participate, visit www.mfgday.com