Republicans are resurrecting efforts to thin millions of acres and take down dead trees. 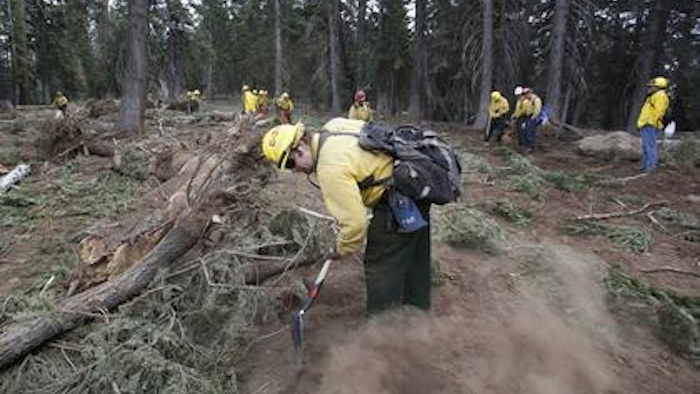 Drought has killed about 12 million trees in California's national forests. In the Rocky Mountain region, an epidemic of pine beetles has damaged trees over a stretch of 32 million acres. Altogether, up to 40 percent of the entire national forest system is in need of treatment to reduce the threat of catastrophic wildfire and disease.

As the national forests suffer from drought, density and infestation, House Republicans are resurrecting efforts to thin more quickly millions of acres and take down dead trees.

It's not a new battle by any means, but this time some of their proposals are winning positive feedback from the Obama administration, even as some environmental groups and House Democrats express concerns.

House Republicans have long sought more aggressive tree removal from national forest lands. Legislation in the last Congress would have required the government to increase significantly the amount of timber it offers for sale each year. The lawmakers say more aggressive timbering would make for a healthier forest and improve rural economies. But such mandates went nowhere in the Senate and prompted a veto threat from the White House.

This year, the Republican-led push is focused on slimming down and streamlining environmental reviews for projects and by making a lawsuit to stop a project potentially much more expensive to file.

The goal is to speed up timber harvests and the removal of underbrush the U.S. Forest Service deemed necessary. The House Natural Resources Committee is expected to vote on the bill on Wednesday.

When the U.S. Forest Service currently wants to undertake major work on a national forest, it talks with stakeholders such as the timber industry, local residents and environmental groups to develop a plan that addresses their concerns and uses the best science available. But, the process often takes too long and ends in a lawsuit, said a memorandum written by Republican staff for the House Natural Resources Committee.

"These policies may be making environmental law firms rich, but they are killing our national forest," said Rep. Tom McClintock, R-Calif., chairman of the House subcommittee that oversees federal lands issues.

Democrats say they worry the legislation will reduce public participation and allow major projects to go forward without adequate review of the effect on the environment.

Under the proposed legislation, many projects fewer than 15,000 acres would be eligible for the streamlined review if the projects were designed to reduce hazardous fuel loads and disease, protect watersheds or improve critical habitat. That's five times the current limit of 3,000 acres.

Tom Tidwell, chief of the U.S. Forest Service, did not take a position on the legislation during a hearing last week, but said he was encouraged by some goals of the bill.

Robert Bonnie, an undersecretary who oversees the Forest Service, told The Associated Press that some of the GOP's approaches are "interesting and we want to engage in the conversation."

But both men emphasized that the biggest problems they face are budgetary. Fires are eating up so much of the agency's budget that it has 39 percent fewer employees than it had nearly two decades ago.

"We're taking people out of the field that put together the projects to reduce fire in the first place," Bonnie said. "So even if you give the Forest Service a bunch of new tools and tool boxes, we don't have enough people on the ground to reach the type of scale we need. So we have to fix the fire budget."

Rep. Niki Tsongas, D-Mass., said that limiting environmental reviews can help in specific situations, "but this bill goes too far."

Nearly three dozen environmental groups wrote McClintock and Tsongas to oppose the bill, including the Sierra Club, The Wilderness Society and Defenders of Wildlife. "Under the pretext of 'forest health' and 'collaboration,' the bill does the opposite by moving toward analysis-free, high-risk production-based logging on our national forests and reducing collaboration," the groups wrote.

Kyle Tisdel, an attorney with the Western Environmental Law Center, said groups that end up suing the federal government to stop a project must take part in an extensive public participation process before they can go to court. He said the additional hurdle of requiring an insurance bond would have a substantial chilling effect on the public's ability to engage the government and take their case to a final arbiter.

"These organizations operate on shoestring budgets for the most part," Tisdel said.

"It's important the public still have the ability to access the courts," Bonnie said. "The best approach we have to reduce litigation is these collaborative efforts on the ground."