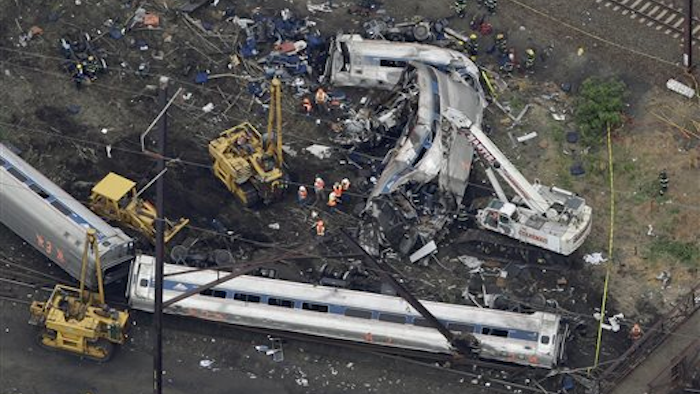 Federal safety regulators and Amtrak officials face questions at a congressional hearing Tuesday on why technology to slow trains that are going too fast wasn't in place before last month's deadly derailment in Philadelphia.

The hearing by the House transportation committee comes amid rising concern about rail safety. There have been seven major passenger and freight train accidents this year. Federal accident investigators have said Amtrak's train 188 was going 106 miles per hour just before it derailed on a curve with a 50 mph speed limit. Eight passengers were killed and about 200 were injured.

Other accidents include three collisions at rail-highway grade crossings that killed seven people and injured scores of other in Valhalla, New York; Oxnard, California; and Halifax County, North Carolina. There have also been derailments near Dubuque, Iowa; Mount Carbon, West Virginia; and Galena, Illinois involving freight trains hauling ethanol or volatile crude oil from the Bakken region of South Dakota. In each case, spectacular fires burned for days.

Amtrak has long had technology called automatic train control on some tracks leading up to curves along its 450-plus mile Northeast Corridor from Boston to Washington. The system uses radio signals to transmit information to computers in the train's cab. However, the northbound tracks before the curve where the Philadelphia crash took place weren't equipped with the system.

The decision on where to install the train control technology was made by a special committee of experts formed two decades ago after a speeding Amtrak train derailed and struck a local commuter train while trying to steer around a curve in Boston's Back Bay neighborhood. No one was killed, but about 450 people were injured.

Protection against excessive speed was added to tracks in several parts of the Northeast Corridor where curves were judged to be risky. However, Amtrak officials have said that at the time it was thought that a northbound train wouldn't be traveling fast enough after leaving Philadelphia's 30th Street station to be in danger of derailing when it reached the curve. After the May 12 crash, Amtrak quickly installed the safety technology.

Amtrak also has been working for seven years on installing a more modern version of the technology, called positive train control, that uses transponders to communicate. Congress in 2008 mandated that the technology be installed by all passenger and freight railroads by the end of this year. Besides preventing speed-related derailments, it also prevents collisions between trains, trains disobeying signals and keeps trains from entering areas where crews are working on tracks.

Amtrak says it will meet the deadline, although most railroads will not. Only Burlington Northern-Santa Fe has submitted paperwork saying it has completed a positive train control system. At least two commuter railroads are also expected to meet the deadline.

The hearing also is likely to raise the question of whether railroads should be required to install inward-facing cameras in locomotive cabs to monitor the actions of engineers. The National Transportation Safety Board first recommended video cameras five years ago. Joseph Boardman, Amtrak's CEO, announced last week that the railroad will install them. The cameras are opposed by labor unions that fear the images will be used punitively against train crews.