Engineers at the French railway network forgot to go and measure the actual distance between tracks and platforms — a mistake that will cost 50 million euros ($68 million) to fix. 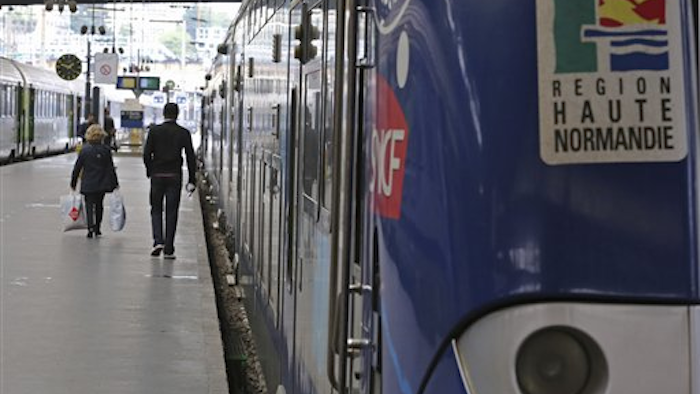 PARIS (AP) -- They measured the new trains, they checked against the latest specs on the book. But engineers at the French railway network forgot to go and measure the actual distance between tracks and platforms — a mistake that will cost 50 million euros ($68 million) to fix.

Nearly 1,300 stations are just a few centimeters (inches) too narrow for the 341 new trains that were to be introduced between now and 2016. The problem with older stations was first reported in the French weekly Le Canard Enchaine and confirmed Wednesday by French railway and government officials.

Jacques Rapoport, president of rail infrastructure organization RFF, acknowledged the problem was "discovered a little late" — like some other notorious engineering miscalculations:

Citigroup's New York headquarters is among the most recognizable buildings in Midtown, with its 45-degree slanted roof and 9-story stilts at the base which were designed to accommodate the church that refused to move out. In 1978, a year after the main tenant moved in, its structural engineer got an unwelcome phone call from an undergraduate architecture student who had discovered that the building could blow over in hurricane-strength winds. The engineer worked out a secret evacuation plan with the city, and quietly dispatched teams of welders through the night for weeks to clandestinely fortify the building. The true story emerged years later.

Known as "Galloping Gertie" during its brief life, the bridge in Washington state became famous for twisting and bending like a ribbon, before collapsing in a windstorm on Nov. 7, 1940, four months after opening. The vertigo-inducing collapse was famously captured on film. Still cited as one of the world's major engineering failures, the wreckage is now among the world's largest man-made reefs. A new, safer version opened in 1950.

Jetliners were just coming into their own, with the pioneering Comet, built by the British company de Havilland. Then, in 1954, two of the jets broke apart mid-flight. The reason? After putting the Comet's fuselage into a giant water tank, researchers figured it out: square windows. Metal fatigue was causing small cracks to form at the edges of the windows, and the pressurized cabins exploded.

Two sets of engineers, one working in metric and the other working in the U.S. imperial system, failed to communicate at crucial moments in constructing the $125 million spacecraft. The result? It crashed into the Martian atmosphere and probably ended up orbiting the sun, lost in space for perpetuity. NASA said the error had probably been causing glitches in the mission for 416 million miles before the spectacularly embarrassing failure on Sept. 23, 1999.

It was the first pedestrian bridge to span London's Thames River in a century, and closed two days after opening in 2000 after it developed a wobble under the footsteps of thousands of visitors — first eager, then a little seasick. The error was similar to the one that took down the Tacoma Narrows Bridge, but with a twist — it was caused by a human tendency to match footsteps to the sway of the span to keep balance, magnifying lateral movements. It reopened in 2002 after a 5 million-pound ($8 million) repair.