Four major manufacturing firms that are based or do much of their work in western Pennsylvania, plus the United Steelworkers of America, were hacked by five Chinese army officials who allegedly stole trade secrets and other proprietary or sensitive information. 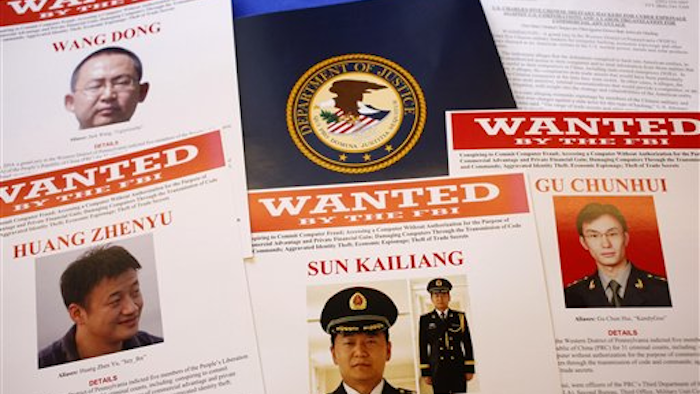 PITTSBURGH (AP) -- Four major manufacturing firms that are based or do much of their work in western Pennsylvania, plus the United Steelworkers of America, were hacked by five Chinese army officials who allegedly stole trade secrets and other proprietary or sensitive information, federal authorities said Monday.

Westinghouse, U.S. Steel, Alcoa, and specialty steelmaker Allegheny Technologies Inc., or ATI, were targeted in the scheme that allegedly began in 2006, according to an indictment.

"This 21st-century burglary has to stop," U.S. Attorney David Hickton, who's based in Pittsburgh and will handle the case, said at a news conference in Washington.

Also targeted was SolarWorld AG, a German company with operations in Oregon.

Justice Department officials contended the companies competed with Chinese firms or were involved in litigation and were targeted by a Chinese military intelligence unit.

The five Chinese officers were accused of accessing the companies' computers to steal information and trade secrets that could help Chinese competitors, some of which were state-owned.

The hackers also allegedly stole emails and other communications that could have helped Chinese firms learn the strategies and weaknesses of American companies involved in litigation with the Chinese government or Chinese firms.

Despite the ominous-sounding allegations, at least one of the firms downplayed the hacking.

"To our knowledge, no material information was compromised during this incident, which occurred several years ago," said Monica Orbe, Alcoa's director of corporate affairs. "Safeguarding our data is a top priority for Alcoa, and we continue to invest resources to protect our systems."