Governors have broken into a partisan on-camera feud at the White House after meeting with President Barack Obama. Leaders of the National Governors Association appeared Monday before the media claiming harmony and wide agreement, but immediately broke into a partisan dispute. 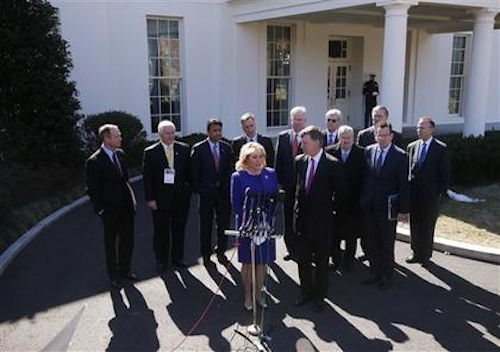 WASHINGTON (AP) -- The nation's governors emerged from a meeting with President Barack Obama on Monday claiming harmony, only to immediately break into an on-camera partisan feud in front of the West Wing.

Louisiana Republican Gov. Bobby Jindal lashed out first, saying if Obama were serious about growing the economy he would approve the Keystone XL pipeline project and take other executive actions.

Instead, Jindal said, Obama "seems to be waving the white flag of surrender" on the economy by focusing on raising the federal minimum wage to $10.10, up from $7.25. "The Obama economy is now the minimum wage economy. I think we can do better than that," Jindal said.

Jindal's statements were the kind that Republicans often make on television appearances or at partisan events, but don't usually come from potential presidential candidates standing yards from the Oval Office. Other governors had been instead expressing wide agreement and appreciation for the president's time. As Jindal spoke, some of his colleagues began shaking their heads, and Hawaii Democratic Gov. Neil Abercrombie began audibly mumbling to others around him.

Connecticut Democratic Gov. Dannel Malloy took over the microphone from Jindal and responded sharply, "Wait a second, until a few moments ago we were going down a pretty cooperative road. So let me just say that we don't all agree that moving Canadian oil through the United States is necessarily the best thing for the United States economy."

Oklahoma Gov. Mary Fallin, a Republican who chairs the National Governors Association and supports Keystone, earlier said she asked Obama when the administration would decide whether to allow it and he told her there would be an answer in the next couple months.

Malloy said Jindal's "white flag statement" was the most partisan of their weekend conference and that many governors support a minimum wage increase.

"What the heck was a reference to white flag when it comes to people making $404 a week?" Malloy snapped. "I mean, that's the most insane statement I've ever heard."

Jindal did not the back down.

"If that's the most partisan thing he's heard all weekend, I want to make sure he hears a more partisan statement," the Louisiana governor responded. "I think we can grow the economy more if we would delay more of these Obamacare mandates."

As the news conference broke up, Colorado Democratic Gov. John Hickenlooper, vice chair of the governors association, called Jindal a "cheap shot artist" as he walked off the White House grounds.

The public dispute came after Obama appealed to the governors for their help to advance his economic policies that stand little chance of winning passage on Capitol Hill.

"Even when there's little appetite in Congress to move on some of these priories, on the state level you guys are governed by practical considerations," Obama told the governors during remarks in the State Dining Room. "You want to do right by your people."

The president pressed in particular for states to act on their own to raise the minimum wage and expand access to early childhood education, two initiatives that have gained little traction in Congress since Obama first introduced them last year.

Several governors are seen as potential presidential candidates in 2016. Obama made light of the speculation about the race to replace him, saying he "enjoyed watching some of you with your eyes on higher office size up the drapes, and each other."

Not every governor met Monday with the president.

Facing multiple investigations in a political-retribution probe in New Jersey, the Republican leader also skipped a Monday news conference by the Republican Governors Association, which he leads.

Jindal shrugged off Christie's absence from the news conference, declaring that the RGA is "more important than just any one governor."

Asked about his own presidential ambitions, Jindal responded, "My honest answer is I don't know what I'm going to be doing in 2016."