The tiny California olive industry says European olive oil filling U.S. shelves often is mislabeled and lower-grade oil, and they're pushing the federal government to give more scrutiny to imported varieties. One congressman-farmer even goes so far as suggesting labels on imported oil say "extra rancid" rather than "extra virgin." 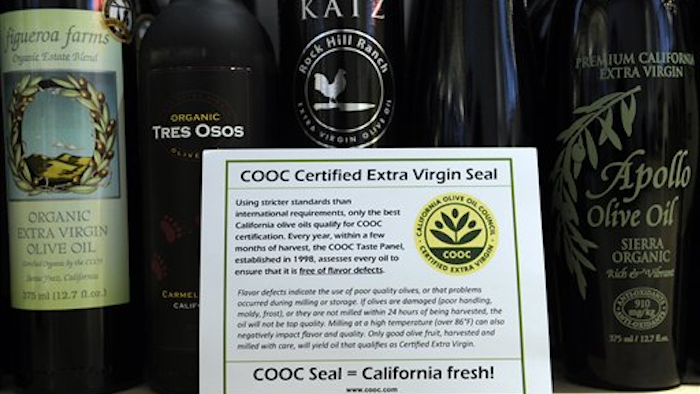 But U.S. producers contend that "extra virgin" olive oil from Europe may not be as pure as you think. They've asked the federal government to intervene by imposing stricter standards on the imports, which now make up 97 percent of the market.

Olive oil production is steadily growing, and the domestic industry says it has gone from 1 percent of the national olive oil market five years ago to 3 percent today. Most of that is in California, though there are smaller operations in Texas, Georgia and a few other states.

U.S. producers are seeking to build on that growth in a struggle reminiscent of the California wine industry's push to gain acceptance decades ago.

They've mounted an aggressive push in Washington, holding olive oil tastings for members of Congress and lobbying for stricter standards on imports. The strategy almost worked last year when industry-proposed language was included in a massive farm bill passed out of the House Agriculture Committee.

The provision backed by California lawmakers would have allowed the Agriculture Department to extend mandatory quality controls for the domestic industry to imports. The bill's language would have allowed government testing of domestic and imported olive oil to ensure that it was labeled correctly.

That testing, intended to prevent labeling lower-grade olive oil as "extra virgin" or fraudulently cutting in other types of oil, would be much more comprehensive than what imported oils are subjected to now. Extra virgin olive oil is considered to be the highest quality.

But the language on labeling was stripped from the bill on the House floor, an effort led by lawmakers from New York, where many of the country's olive oil importers are based. They had the backing of food companies and grocery stores that use and sell olive oil.

"What we're after here is not to cause problems for our friends who would like to market it. It's more just the truth in advertising that's necessary," LaMalfa said.

"It's not rancid," he said. "There is always going to be a problem in every industry, but this is nothing more than a multimillion-dollar earmark," he added, using the term for special provisions that sometimes are inserted into legislation.

In the end, the final farm bill signed by President Barack Obama earlier this month was silent on olive oil.

But a nonbinding statement accompanying the bill encouraged the Agriculture Department, the U.S. Trade Representative and the Food and Drug Administration to "remove the obstacles that are preventing the U.S. olive oil industry from reaching its potential." It cited a 2013 U.S. International Trade Commission report that said international standards are widely unenforced and allow many varieties to be mislabeled and possibly even adulterated.

The report also cited subsidies for European olive oil producers and tariffs as barriers to the domestic industry's success.

The California olive oil industry boasted of helping to influence the report. According to the American Olive Oil Producers Association, California producers arranged farm tours for federal investigators, arranged for witnesses to testify to the group, and even held an olive-oil tasting on Capitol Hill for lawmakers and administration officials.

For now, the domestic industry says it will keep pushing. Kimberly Houlding, executive director of the American Olive Oil Producers Association, says producers are still considering petitioning the USDA for an order to establish mandatory quality standards, including frequent testing. Ideally the order would apply to the entire domestic industry, including importers, Houlding says.

Eryn Balch of the North American Olive Oil Association, which represents the importers, says they want to work with the domestic industry to grow the olive oil market in the United States. There's still a lot of the market to grab — only around 40 percent of U.S. consumers use olive oil, and olive oil has only about 15 percent of the volume share compared to other cooking oils. But that market is growing along with increased awareness of olive oil's health benefits compared with other oils. Extra virgin olive oil is often rich in polyphenols, nutrients that are thought to be helpful in preventing heart disease and other illnesses.

"If the industry promoted the key proven benefits with a common voice and positive message, the growth potential could be almost limitless," Balch said.

The United States now consumes the third largest amount of olive oil of any nation, behind Italy and Spain, according to the trade commission report. The report said consumption has risen by more than 50 percent since 2001 but said most U.S. consumers aren't able to distinguish good olive oil from bad, so they gravitate toward the least costly.

Patricia Darragh, director of the California Olive Oil Council, says the domestic industry wouldn't have the capacity to supply all of the country's olive oil, but it is a grassroots industry that is continuing to grow. And in another decade or two, Americans may be more familiar with the domestic variety.

"We're where the California wine industry was 20 or 30 years ago," Darragh says.