Federal authorities have launched a criminal investigation into a massive coal ash spill into a North Carolina river, demanding that Duke Energy and state regulators hand over reams of documents related to the accident that left a waterway polluted with tons of toxic sludge. 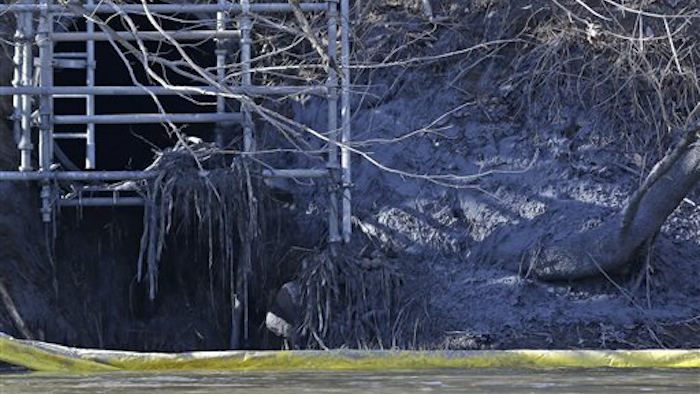 RALEIGH, N.C. (AP) — Federal authorities have launched a criminal investigation into a massive coal ash spill into a North Carolina river, demanding that Duke Energy and state regulators hand over reams of documents related to the accident that left a waterway polluted with tons of toxic sludge.

The U.S. Attorney's Office in Raleigh issued grand jury subpoenas seeking records from Duke and the North Carolina Department of Environment and Natural Resources. The subpoenas seek emails, memos and reports related to the Feb. 2 spill into the Dan River and the state's oversight of the company's 30 other coal ash dumps in North Carolina.

The Associated Press obtained a copy on Thursday of the subpoena issued to the state through a public records request.

"An official criminal investigation of a suspected felony is being conducted by an agency of the United States and a federal grand jury," said a cover letter accompanying the subpoena, which was dated Monday and signed by a criminal prosecutor.

The exact crime and precisely who is being targeted for potential prosecution is not spelled out in the document.

Thomas Walker, the U.S. Attorney for the Eastern District of North Carolina, said he could not comment on the subpoenas.

The spill at a Duke Energy plant in Eden spewed enough toxic sludge to fill 73 Olympic-sized pools, turning the river water a milky gray for miles. It was the third-largest coal ash spill in U.S. history.

State health officials have advised that people not eat fish from the river and to avoid contact with the water. Coal ash contains arsenic, lead, mercury and a host of other chemicals that are highly toxic to humans and aquatic life.

In addition to the demand for records, prosecutors also ordered the state environmental agency's chief lawyer to testify next month before a grand jury. Agency spokesman Drew Elliot said the state will fully cooperate with the federal investigation.

The subpoenas were issued the day after the AP reported that environmental groups have tried three times in the past year to sue under the Clean Water Act to force Duke to clear out leaky coal ash dumps. Each time, the state agency blocked the citizen lawsuits by intervening at the last minute to assert its own authority under the act to take enforcement action in state court.

After negotiating with Duke's lawyers in private, the state proposed settlements that environmentalists regarded as highly favorable to the company.

Duke, a company valued at $50 billion, would have paid fines of $99,111 for groundwater pollution leaching from two coal dumps like the one that ruptured in Eden. The settlement would have required Duke to study how to stop the contamination, but it included no requirement to clean up the dumps near Asheville and Charlotte.

Among the documents targeted by the federal subpoenas are the correspondence between Duke and the state environmental agency related to the proposed deal highlighted in the AP's story. On Monday, lawyers for the state asked a judge to disregard the agency's own proposed settlement in the wake of the spill.

Clean water advocates have long complained that state regulators are too cozy with the polluters they regulate. But they say that coordination and cooperation has become even more overt since the January 2013 inauguration of Gov. Pat McCrory, a pro-business Republican who worked at Duke Energy for 28 years. Records show McCrory has benefited from at least $1.1 million in political donations linked to his former employer since 2008.

The criminal investigation is a serious new development, said Frank Holleman, senior attorney for the Southern Environmental Law Center, the group that had tried to sue Duke under the Clean Water Act.

After the SELC's third attempt, the state also filed enforcement actions for all of Duke's remaining coal ash sites in North Carolina, effectively blocking environmentalists from pursuing further action under the federal act.