Tyson Foods sent new animal welfare guidelines to its 3,000 independent hog suppliers on Wednesday — roughly six weeks after gruesome video from an Oklahoma farm showed some animals being struck with bowling balls and others being slammed onto a concrete floor. 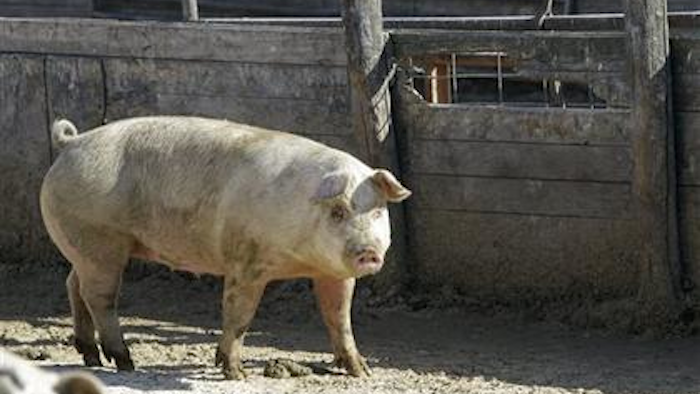 TULSA, Okla. (AP) -- The yearslong call by animal rights groups to improve conditions on American hog farms advanced considerably this week when two of the country's biggest meat companies urged producers to change how pregnant sows are housed, and one announced it wanted to stop the practice of killing sick or injured animals by "manual blunt force."

Tyson Foods sent new animal welfare guidelines to its 3,000 independent hog suppliers on Wednesday — roughly six weeks after gruesome video from an Oklahoma farm showed some animals being struck with bowling balls and others being slammed onto a concrete floor. And Smithfield Foods announced Tuesday it would ask growers to move pregnant sows from gestation crates to group housing by 2022.

The change in corporate policy comes after decades of lobbying and protests from animal rights groups and a trend that saw more food retailers and restaurant chains moving away from suppliers who implemented the controversial hog-raising practices on farms.

The planned overhaul was lauded by several animal rights groups, some who had campaigned against gestation crates, which they deemed institutionalized animal abuse and considered it an outdated and unnecessary practice. "Gestation crates" are cramped, often-foul stalls that barely allow a sow to take a step forward or backward and have been used for decades.

Tyson said it is urging pork producers to improve housing conditions for gestating sows enough to allow sows of all sizes to stand, turn around, lie down and stretch their legs.

Tyson spokesman Gary Mickelson said the Arkansas-based company hasn't taken a position against any particular type of housing, but wants producers to "improve housing systems for pregnant sows by focusing on both the quality and quantity of space provided, whether it involves gestation stalls, pens or some other type of housing."

"We're encouraging farmers to consider making these space improvements when they or the piglet suppliers redesign or build new gestation barns," Mickelson told The Associated Press in an email.

Smithfield, the world's largest pork producer, had previously said it was phasing out gestation crates at its U.S. facilities by 2017. The Virginia-based company has transitioned 54 percent of its pregnant sows to group housing so far and said in a statement this week that "animal care is one of our core sustainability commitments, and we are proud of our employee and company efforts to meet this goal."

Tyson also said it would require by the end of the year farmers who manage company-owned sows to end the longstanding industry practice of blunt-force euthanasia in favor of alternative methods in line with American Veterinary Medical Association guidelines.

The Henryetta, Okla., operation in the video, West Coast Farms, had raised hogs for Tyson until the company's contract was dropped by the meat producer after the footage surfaced. A number listed for the local farm has since been disconnected.

The animal rights group Mercy For Animals released the video in November. Founder and executive director Nathan Runkle said he was pleased with Tyson's decision to improve housing conditions for its hogs.

"We hope this announcement is more than PR hogwash and that Tyson acts quickly and diligently to implement these changes in order to spare millions of animals needless misery and suffering."

Other animal rights groups, such as The Humane Society of the United States, lauded the changes by both companies as "a dramatic step forward."

"There has been an exodus from a sector of the industry that has relied on these crates as a conventional production practice — an inhumane and unsustainable production practice," said Wayne Pacelle, president and CEO of the Humane Society. He said the actions by Smithfield and Tyson "makes it crystal clear that there is no future for gestation crates in the U.S."

It's difficult to determine whether these improvements will eventually drive up the cost of pork. The price of the meat is affected by myriad factors, such as feed, fuel costs, transportation expenses and wages, Mickelson said.

"We can tell you consumer prices are set by retailers and restaurants that sell directly to the consumer —not by Tyson Foods," he said.