Willie Pritchett is a Purdue man. He graduated in 2000 with an undergraduate degree in organizational leadership and minors in communications and computer science. He has an MBA from Indiana Institute of Technology. And if he had it to do again — he would not. Pritchett, an entrepreneur and... 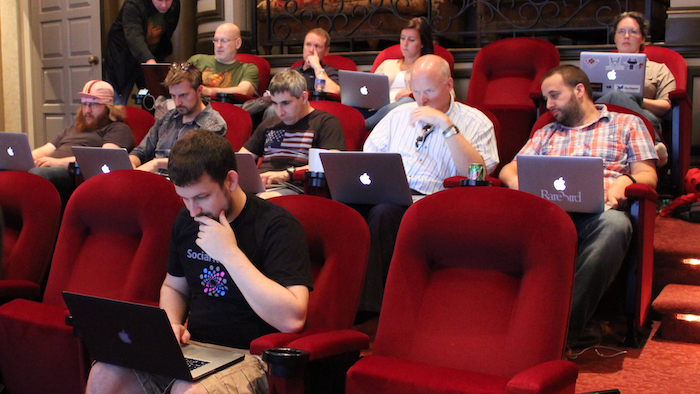 Willie Pritchett is a Purdue man. He graduated in 2000 with an undergraduate degree in organizational leadership and minors in communications and computer science. He has an MBA from Indiana Institute of Technology. And if he had it to do again — he would not.

Pritchett, an entrepreneur and software developer, is convinced that the $3,500 he spent on an immersive seven-day class did more to accelerate his skill and change the course of his business than any formal college program.

He is among the growing number of Hoosiers who have discovered Eleven Fifty Coding Academy in Carmel, one of several dozen academies sprouting up across the U.S. that aim to fast-track training in the lucrative field of software development.

"For me, honestly, if I had had this type of training before I went to college, I probably wouldn't have gone," he told The Indianapolis Star. "Advance calculus and physics really doesn't apply for software development. . I could have saved on all those tuition and dorm fees."

Academies such as Eleven Fifty are providing an alternative to those who are interested in landing high-paying work in a competitive, job-rich field — and with far less of the cost and time commitment of a traditional college degree program.

Most coding academies are for-profit enterprises with small classes that feature curriculum targeted at industry needs and that have no prerequisites of experience or education. Classes can last a week to several months, and costs range from $1,000 to $12,000. Eleven Fifty classes top out at $3,500.

Just as important, the training is in a field that is exploding. Not only are technology companies competing for the talent that creates, designs and writes code using various software languages, but so, too, are the health care industry and practically every other company that uses data. And that includes universities.

The scenario is such that the U.S. Bureau of Labor Statistics predicts that hiring of software developers in Indiana will grow 22 percent from 2012 to 2022, which is more than twice as fast as the average for all occupations. Indianapolis is among the cities creating the most technology jobs in the country, according to a Forbes 2013 survey.

And that demand is driving pay. In Central Indiana, for example, salaries for software developers can start at about $77,000 annually. The situation could become reminiscent of the days when Hoosiers flocked to manufacturing as a high-paying, in-demand alternative to college.

The job prospects are good news for Cameron Dershem. He's an apprentice at Eleven Fifty after completing one of the coding classes but will be in search of permanent work in a year or so.

The 29-year-old moviemaker-turned-software developer had dabbled in programming but never considered it a career until taking that course at the urging of his brother.

"The best thing for me as a result of this program," Dershem said, "is being able to change careers successfully and get a job."

That's the goal. "Our primary objective is to help software developers succeed, no matter what it takes," said Matt McIntyre, Eleven Fifty co-founder and director of marketing.

When compared with the at least 40 academies across the country, the differences are distinct, said McIntyre, who founded Eleven Fifty with three colleagues including Scott Jones, Cha Cha founder and widely known for developing voice mail.

The academy is set up in a wing of Jones' home. Classes are held in the theater; snacks and some meals are provided. There's also the chance to engage in fun — a winding, mahogany slide is a favorite — during breaks from classes that can run up to 12 hours a day.

The strategy for teaching students is the biggest difference.

"We have not promoted ourselves necessarily as the career-changing school," McIntyre said. "Many of the 12-week schools say we'll get you from 0 to 60. . We're doing the same thing in seven days, but we say we take people from 20 to 120."

Students come from a variety of backgrounds. "We've had everything from a longtime SharePoint developer to a military engineer attend our classes," McIntyre said. "Their experience with tech ranges from just started to professional."

Reaching people who are underrepresented in technology fields also is a goal. "So far, we have been very successful and are always looking for more ways to enroll students of various backgrounds," McIntyre said. A plan to offer scholarships to women and minorities also is in the works.

While Eleven Fifty's focus is on increasing the number of developers, Indiana has an overall shortage of IT workers, including in development operations and graphic design. Contributing factors are as wide as the distance from South Bend to Evansville.

"Older employees are aging out, too few college graduates major in computer science or engineering, and new technologies like the cloud require a different skill set than what some companies had looked for a few years ago," said Mike Langellier, chief executive of TechPoint, the state's catalyst for helping to connect and grow the tech community.

Regardless of the reasons, Langellier said, it's going to take a multipronged approach to attract high-skilled talent. "We need new talent from universities and out of town. We need to enhance talent that exists here like through Eleven Fifty and university programs. We also need to inspire and nurture young talent to pursue these careers."

Calvin Hendryx-Parker sees the demand firsthand. As a co-owner and chief technology officer of Six Feet Up, a growing company that does large-scale website deployments, he often is in the market to hire IT pros.

"There's definitely a shortage of programmers," he said. "We have a really hard time hiring people here locally; we have a lot of remote employees because of that."

He and his wife, Six Feet Up CEO Gabrielle Hendryx-Parker, had considered doing some training on their own but instead teamed up with Eleven Fifty, where Calvin Hendryx-Parker teaches the software language Python. From his perspective, Indiana has a ways to go to close the skill gap. Still, he thinks there is potential.

"There are people out there who work a 9-to-5 job who are maybe called analyst but maybe are an Eleven Fifty course away from being an open source developer. They may have awesome Microsoft Access skills or they understand a little bit of programming, but they need that next step to push them."

It was that next step that moved Pritchett, the entrepreneur and Purdue grad. He met Terrence Kunstek, another Eleven Fifty co-founder and lead instructor (and developer of the Cha Cha search engine) at a one-day developer boot camp. Kunstek told him about Eleven Fifty's seven-day course, and Pritchett signed up, not knowing what to expect.

"I learned IOS development using Swift — a programming language — and it's allowed me to get work done myself without having to pay an outside developer to do it for me," said Pritchett, who is president of Patient Assist, a company that develops web applications primarily for health care companies.

The training was interesting and unique, Pritchett said, because — besides sitting comfortably in high-back, red velour chairs in a movie theater setting instead of a nondescript classroom — once the basics were out of the way, he and the other students immediately had the chance to develop real-world applications, unlike other courses he had taken.

With coaching from Kunstek and a teaching assistant, students have an app in the Apple app store at the conclusion of the classes.

As the effort to close Indiana's technology skills gap continues, employers such as Hendryx-Parkers are making do by using freelance help. But the academies could help change that.

"I'd rather hire people and have them as a part of our team," Calvin Hendryx-Parker said. "If I can do that through people here in Indiana, I would love to do that."