Agrochemicals giant Syngenta is facing a growing number of lawsuits challenging its release of a genetically modified corn seed that China had not approved for import, with losses to farmers estimated to be at least $1 billion. More than 50 lawsuits have been filed in... 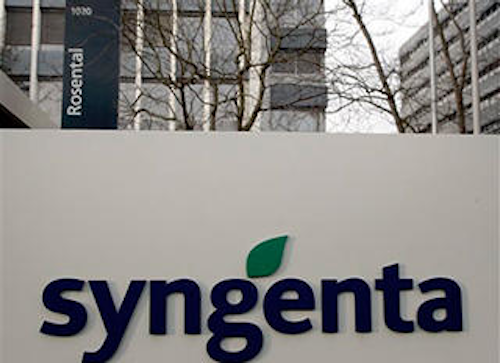 Agrochemicals giant Syngenta is facing a growing number of lawsuits challenging its release of a genetically modified corn seed that China had not approved for import, with losses to farmers estimated to be at least $1 billion.

More than 50 lawsuits have been filed in 11 major corn-growing states, including Illinois, Iowa, Missouri, and Nebraska with hundreds more being prepared. Some suits are from farmers represented by individual attorneys, others are class-action lawsuits representing hundreds more.

A federal court panel that manages complex lawsuits involving large numbers of plaintiffs has scheduled a Dec. 4 hearing in Charleston, South Carolina, to decide where to consolidate the cases. It's likely to be in Iowa or Illinois, according to Rick Paul, an attorney representing 13 farmers who filed suit in federal court in Iowa.

The legal dispute centers around Syngenta's sale of a hybrid corn seed called Agrisure Viptera, which was genetically altered to contain a protein that kills corn-eating bugs such as earworms and cutworms. The U.S. Department of Agriculture approved it in 2010, and Syngenta first sold it to farmers in 2011.

It has been industry practice for biotech seed developers to wait until major trade partners have approved new products before selling it widely, Paul said. But China, a growing importer of U.S. corn that refuses to buy genetically modified crops it hasn't tested, had not approved Viptera.

China discovered the Viptera corn trait in several U.S. shipments in November 2013 and in February began rejecting the nation's corn. It has rejected more than 130 million bushels as of late October, the lawsuits say.

Damages have been estimated to exceed $1 billion for the last nine months of the marketing year ending Aug. 31, according to research by the National Grain and Feed Association, a grain marketing trade group.

Exports of U.S. corn are down 85 percent this year compared to 2013 and that has driven down corn prices, according to the 13 suits filed in federal court in Des Moines, Iowa.

"The loss of a large purchaser of U.S. corn like China as a result of the Viptera contamination has had a sudden and calamitous impact the U.S. corn market," Iowa farmer Ward Graham says in his lawsuit.

Graham, 47, who farms 700 acres of corn and soybeans, said he believes the impact is extensive. "Even for a small farmer like me when these markets are just depressed like this because of exports it's a huge number," he told The Associated Press on Monday.

A Syngenta spokesman said the right of U.S. farmers to use the newest technology to improve profits should not be dependent on the approval of other countries.

"Syngenta believes that the lawsuits are without merit and strongly upholds the right of growers to have access to approved new technologies that can increase both their productivity and their profitability," spokesman Paul Minehart said in a statement.

He said the company has been in full compliance with regulatory and legal requirements for the new seeds.

The lawsuits seek to compensate farmers for the alleged lost market and additional money to punish Syngenta. Since many factors affect corn prices, the lawyers representing farmers must prove the extent to which the Viptera trait contributed to falling corn prices.

Graham said he hopes the legal actions lead to a new precedent, "that makes it mandatory that they get approval for exports and trade overseas before they release this stuff out to the farmer and put it in the food chain."