Plastic bag manufacturers on Friday passed their first hurdle in their effort to delay and eventually repeal California's new ban on single-use plastic shopping bags before it takes effect. The office of Attorney General Kamala Harris cleared the way for the groups to begin collecting signatures... 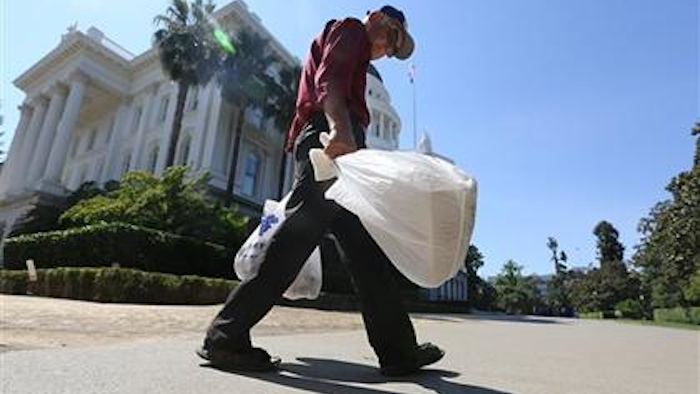 Plastic bag manufacturers on Friday passed their first hurdle in their effort to delay and eventually repeal California's new ban on single-use plastic shopping bags before it takes effect.

The office of Attorney General Kamala Harris cleared the way for the groups to begin collecting signatures for a referendum vote on the ban on the November 2016 ballot.

Last week, Gov. Jerry Brown signed the first statewide ban on plastic bags, citing a "torrent" of plastic pollution in parks and waterways. It followed one of the fiercest legislative battles of the year, pitting bag makers against environmentalists.

If opponents of the law submit more than 500,000 signatures by January, the ban would not take effect until voters weigh in.

A national coalition of plastic bag manufacturers says voters will be on their side when they learn the law, SB270, authorizes a 10-cent fee for paper bags that are now often provided for free.

"If this law were allowed to go into effect it would jeopardize thousands of California manufacturing jobs, hurt the environment, and fleece consumers for billions so grocery store shareholders and their union partners can line their pockets," Lee Califf, executive director of the American Plastic Bag Alliance, said in a news release.

Under the statewide ban, large grocery stores must stop carrying single-use bags by July 2015. Pharmacies, liquor stores and convenience stores must comply the next year.

Manufacturers' fight against the legislation comes as plastic bag bans have been gaining momentum across the country, including in the cities of Chicago, Seattle, and Austin. In California, more than 100 cities and counties, including Los Angeles and San Francisco, already ban plastic shopping bags at checkout counters.

An environmental group that supports the ban has vowed to fight the referendum.

"We are confident that Californians will repeat history by rejecting an effort by an out-of-state, special interest polluter funded misinformation campaign to overturn a popular law," Mark Murray, executive director of Californians Against Waste, said in a news release.

Records show the American Plastic Bag Alliance has spent at least $140,000 lobbying the California Legislature and the governor's office in the first six months of the year.