Inside a nondescript garage-like workshop nestled between restaurants, a flower shop and jewelry stores along Main Street, ideas are taking shape. At HeatSync Labs, the tables are littered with computer chips, pens, pads, and tools while ... 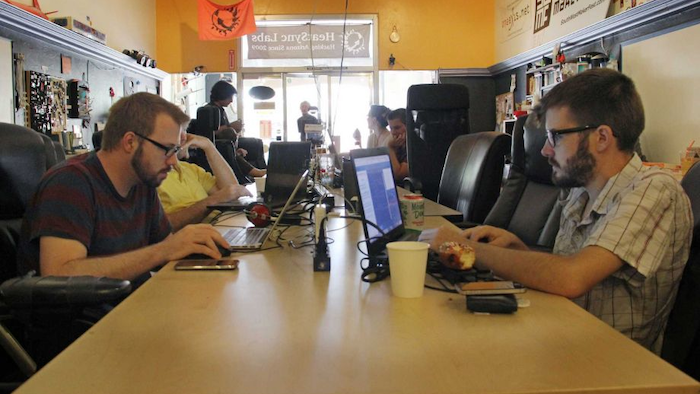 Inside a nondescript garage-like workshop nestled between restaurants, a flower shop and jewelry stores along Main Street, ideas are taking shape.

At HeatSync Labs, the tables are littered with computer chips, pens, pads, and tools while the room is abuzz with the chatter of would-be inventors hoping to change the world — or just make cool things. They are part of a growing global movement of so-called hackerspaces.

"It's all about sharing what we know with one another," said Mitch Altman, 57, founder of a similar setup in San Francisco called Noisebridge. "It's centered around community and education and a place where people do what they love doing and hopefully make a living from it."

The idea began to take shape in the U.S. after Altman and other Americans attended a 2007 computing conference in Germany where panelists spoke of their own hackerspaces. Altman returned home, met with fellow tinkerers, rented a space for Noisebridge the next year.

At the same time, similar workshops were opening up across the country — NYC Resistor in New York City, Hack DC in Washington, D.C., and The Hacktory in Philadelphia — while dozens more have popped up since. More than 1,600 are now operating around the world, according to hackerspaces.org, a website dedicated to the effort.

At HeatSync, which opened in 2009, Larry Campbell, 49, is working on a nuclear fusion chamber, while Ryan McDermott, 27, tinkers with an electric keyboard programmed to make the colors dance on an LED strip in preparation for Nevada's annual Burning Man alternative arts festival.

Campbell, a network engineer, hopes his device will "change the universe" by turning hydrogen atoms into helium.

McDermott, who works in information technology, has more modest plans for his keyboard.

"Anybody that I've shown this thing immediately wants to play with it and touch it and make the colors dance and things like that," McDermott said. "That's the fun thing for me: getting people's reaction out of it."

While many projects in hackerspaces are done as hobbies or just for the challenge, some have been turned into multimillion-dollar products. The MakerBot, for example, was created by a tinkerer at NYC Resistor and is now one of the most well-known 3D printers on the market.

And while hackerspaces have been quick to spread, each has sprouted locally with its own unique flavor.

HeatSync, for instance, gives members 24/7 access to the facility for paying dues that help cover the costs for rent and tools. For non-paying members of the public, HeatSync opens its doors for three hours every weekday, from 7 p.m. to 10 p.m., during which they can work on projects and share ideas.

"Anybody can get their foot in the door," said HeatSync co-founder Jacob Rosenthal, 33. "It's their job to make it work for them but (we) give you a time to meet the people and to get access to some of the tools and to show people your project and get people excited about what you do."

Jeremy Leung, 30, an IT security consultant and another co-founder of HeatSync, said those involved in the movement also are working to dispel the myth that hackers are, well, hackers who are an ominous security threat to credit card data and computer systems worldwide.

In reality, those involved in the movement say it has a much more productive mission: to improve existing technology and in some cases create new ideas.

"Hacker had become this muddied term in the media," Leung said, describing the origins of the word as merely "someone that takes a technology and they learn so much about it that they're able to take it past what the initial idea was."

Campbell hopes to do just that with his nuclear fusion chamber. When he fires it up, nobody will be able to change those helium atoms back into hydrogen.

"All of a sudden, something's irrevocably different," Campbell said. "And that's kind of cool."