Dems Have Million-Dollar Day On Impeachment 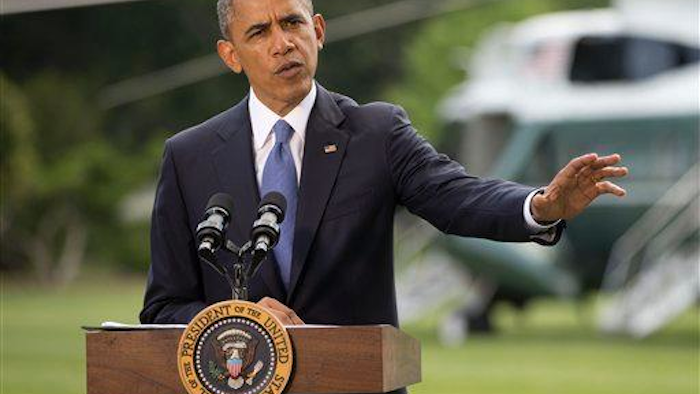 "I understand the strategy is intended to gin up its base," Israel told reporters at a breakfast organized by The Christian Science Monitor. "Every time they talk about suing the president, that just ignites our base."

Boehner, meanwhile, said Democrats were the ones fueling impeachment talks. The Ohio Republican told reporters on Capitol Hill that his party has "no plans" to open impeachment proceedings. He called such talk a "scam."

The dueling messages come as both parties are working to engage voters — and, perhaps more importantly, donors. The Democrats' House campaign committee has been a fundraising powerhouse this election cycle, out-raising its GOP rival in 16 of the last 18 months. Although House Democrats face an uphill climb to take the majority, their fundraising operation has raised almost $125 million since January 2013.

House Democrats have highlighted the specter of impeachment in fundraising pitches to tremendous effect since Boehner announced a lawsuit against Obama for failing to enforce U.S. laws, a potential starting point for impeachment proceedings. Some 74,000 first-time donors have responded to the Democrats' House arm pitch about impeachment, Israel said.

"The fate of Obama's presidency is at stake," Democrats said in an email solicitation sent Sunday.

On Capitol Hill, Boehner said Republican have "no plans to impeach the president" and said the White House was fueling talk of impeachment for political gain.

"This whole talk about impeachment is coming from the president's own staff and coming from Democrats on Capitol Hill. Why? Because they're trying to rally their people to give money and to show up in this year's elections," Boehner said.

"It's all a scam started by Democrats at the White House," he added.

In fact, speculation about impeachment has been popular among conservative activists and some lawmakers despite Boehner's dismissal. In an interview this week, Louisiana Rep. Steve Scalise, newly elected to the GOP leadership, repeatedly declined to rule out impeaching Obama.

Republicans are expected to keep their House majority after November's elections. Re-drawn congressional districts favor the GOP and both parties are contesting only a handful of seats. Even so, the parties' House campaign committees have already raised more than $226 million as of July 1.

Republicans have 234 seats in the House and Democrats have 199 seats. There are two vacancies.