Australia's experience illustrates how easy it is to scuttle complicated environmental laws, and serves as a warning to President Barack Obama, whose recent proposal to force a 30 percent cut in power plants' carbon emissions is drawing anger from both sides of politics. 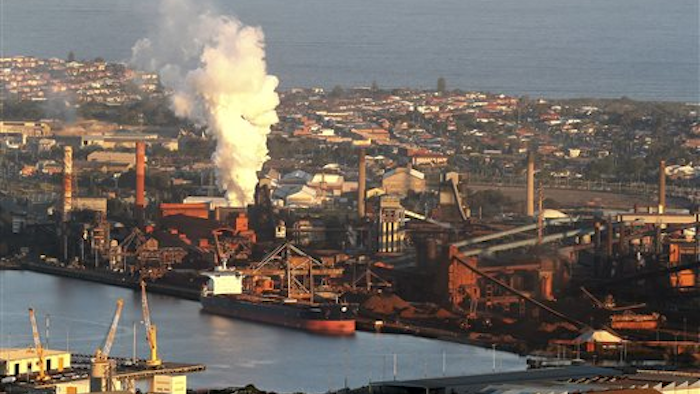 CANBERRA, Australia (AP) -- In 2007, Australians were ready to do something to combat climate change, even if it was expensive. More than two-thirds of them said so in a poll, and both major political parties vowed to make industries pay for greenhouse-gas emissions.

The undoing of that perspective will likely be complete after a new Senate is sworn in Monday. It's expected to give Prime Minister Tony Abbott the votes he needs to repeal a 2-year-old tax charged to around 350 of Australia's biggest carbon polluters. Three top political leaders lost their jobs over the issue as support for climate-change measures plummeted.

Opponents of the carbon tax implemented in 2012 had the media largely on their side. Electricity prices soared — not mainly because of the tax, but because power companies were spending billions on infrastructure. Most electricity users were compensated for the added cost of the tax, but many of them didn't know that. And rising gas prices fed the fury — even though the tax didn't apply to gasoline.

Australia's experience illustrates how easy it is to scuttle complicated environmental laws, and serves as a warning to President Barack Obama, whose recent proposal to force a 30 percent cut in power plants' carbon emissions is drawing anger from both sides of politics.

"One of the keys was the fact that we did lose bipartisan support for emissions trading as one of the solutions," said John Connor, CEO of the Sydney-based Climate Institute think tank. "And that then threw this issue into the sort of political and cultural trench warfare that you see in the U.S., but not so much of elsewhere."

Australians' concerns about global warming peaked before elections in 2007. Prime Minister John Howard had grown unpopular for joining Washington in refusing to accept U.N. Kyoto Protocol targets for cutting carbon emissions. Both Australia and the U.S. are leading producers of coal, a major source of the pollution.

An annual poll by the Lowy Institute for International Policy shows the proportion of Australian voters who saw global warming as a serious problem that demanded immediate steps — even at significant cost — peaked at 68 percent in 2006. The telephone survey of 1,007 voters had a 3.1 percentage-point margin of error.

Facing defeat, Howard's conservative coalition back-flipped. Both sides advocated a cap-and-trade scheme in which free-market forces set the price of emitting a ton of carbon dioxide.

Kevin Rudd's center-left Labor Party won, but the Senate thwarted his efforts to introduce a cap-and-trade system. Some senators considered his plan too extreme, while others found it too weak. Meanwhile, the global economic crisis eclipsed the environment in Australian politics.

The government and the leader of Australia's conservative opposition, Malcolm Turnbull, were on the verge of a cap-and-trade deal in 2009. But Turnbull lost his leadership post to Abbott, then a senior opposition leader and a fierce opponent of the proposal.

Rudd shelved the plan. His popularity plummeted, and he lost his job in a Labor Party leadership vote to Julia Gillard.

The minor Greens party soon became pivotal. Rather than a cap-and-trade scheme, the Greens advocated a carbon tax in which government, not the market, set the price of pollution. After the 2010 election, Gillard needed the Greens' support to form a government. To get it, she agreed to a carbon tax, something she had vowed not to allow.

The tax, which went into effect in July 2012, charged major polluters a fixed price on carbon. It was to switch in mid-2015 to a cap-and-trade scheme, with a floating price set by market forces and linked to the European Union market.

While Gillard's broken promise drove much of that anger, other forces were at work.

Rupert Murdoch's News Corp., which owns 70 percent of Australia's newspapers, supported Rudd in 2007 but by 2010 was backing Abbott. The top talk radio hosts in every major Australian city pushed the climate skeptic line.

Within days of the tax taking effect, Australia's consumer watchdog cautioned two companies that sold solar panels for falsely claiming electricity prices under the tax would rise 400 percent by 2019. The managing director of a major bakery franchise resigned over a memo in which he urged store owners to raise prices and "let the carbon tax take the blame." There were hundreds of complaints of misleading advertising and price-gouging.

It was easy to attribute higher electricity costs to the tax. Between 2006 and last year, the average Australian household power bill increased more than 85 percent, the Grattan Institute think tank reported.

But the government says the tax has accounted for only around 9 percent of the increase since July 2012. And most households were compensated through tax breaks or welfare.

Grattan said about half the rate hikes were related to expensive upgrades by Australian electricity providers. The companies can increase rates to recoup capital expenditures. Many critics accused them of "gold plating" their networks but industry officials said they were improving infrastructure to meet rising demand.

Opinion polls indicated Australians were overestimating the impact of the carbon tax.

A survey by the think tank Per Capita soon after the tax started found that most people blamed it for higher gasoline prices — even though the tax didn't apply at the pump.

Most estimated the tax increased their weekly cost of living by 20 Australian dollars ($19) or more, about twice the government's estimate. And while 90 percent of households received tax-related government compensation, half those surveyed said they hadn't received anything. The Per Capita online survey of 1,422 Australians did not publish a margin of error.

By 2013, six years after Howard's government was reeling over its failure to respond to climate change, the Labor Party was scrambling to undo its response.

Party lawmakers ousted Gillard and restored Rudd, who promised to ditch the tax and begin the cap-and-trade scheme earlier, greatly reducing the cost of a ton of carbon. Abbott's conservative coalition won the 2013 elections in a landslide, anyway.

Abbott promised to replace the tax with a AU$2.55 billion fund to help polluters convert to cleaner technologies. He also has said Australians will be able to keep the government compensation they began receiving to defray carbon-tax costs.

"The irony of all this is that Tony Abbott did describe the whole thing as socialism dressed up as environmentalism, and it's interesting that what he's taken away is the environmentalism, but keeping the tax shifts, or the socialism, if you like," said Connor, of the Climate Institute.

As Obama has sought support for the Environmental Protection Agency's proposed carbon rules, he has noted the political perils.

"If we're blithe about saying this is the defining issue of our time but we don't address people's legitimate economic concerns, then even if they are concerned about climate change they may not support efforts to do something about it," he told the League of Conservation Voters last month.

Australia's tax faces its demise as support for change appears to be rebounding. Forty-five percent of respondents in this year's Lowy poll see global warming as a "serious and pressing problem," up 5 percentage points from 2013 — Australia's hottest year on record.

Meanwhile, Australians are limiting pollution themselves. Australia's power consumption declined for the first time in 2010, and has fallen every year since. Its greenhouse gas emissions dropped a record 0.8 percent from 2012 to 2013.

One reason for the change, according to an Australian Institute think tank report, was all the carbon tax attention. It made many Australians realize how much they were spending on electricity.