The force of the explosion rattled buildings and sent plumes of black smoke into the air. Dozens of homes were evacuated, and firefighters couldn't get close to the burning site for several hours because ammunition was exploding. 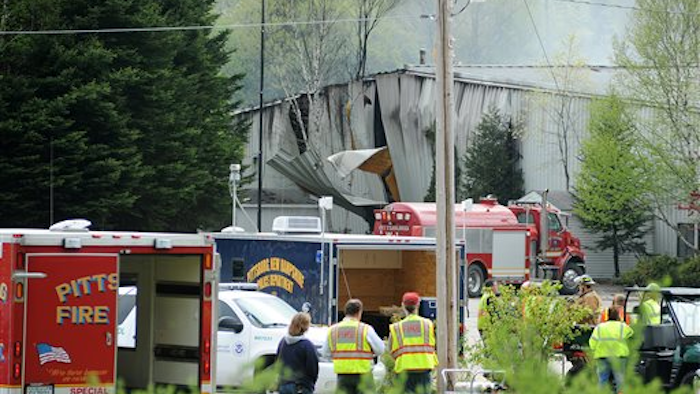 LANCASTER, N.H. (AP) -- The owner of a gunpowder plant where an explosion shook nearby buildings and killed two workers was convicted on Wednesday of negligent homicide and manslaughter.

Craig Sanborn owned the Black Mag plant in Colebrook, where the 2010 explosion killed 56-year-old Donald Kendall, of Colebrook, and 49-year-old Jesse Kennett, of nearby Stratford.

The force of the explosion rattled buildings and sent plumes of black smoke into the air. Dozens of homes were evacuated, and firefighters couldn't get close to the burning site for several hours because ammunition was exploding.

Prosecutor John McCormick argued that Sanborn, who was found guilty by a jury in Coos County Superior Court, had been motivated by profits.

"Obviously, we're pleased the jury came back with guilty verdicts and that justice was done for the victims' families," McCormick said after the verdict.

McCormick told jurors that Sanborn, of Maidstone, Vt., was reckless in manufacturing, testing and storing the black powder and failed to adequately train and protect workers. He told them Sanborn also was trying to meet conditions of an ambitious and lucrative contract for which he'd already received a $300,000 down payment.

Sanborn's lawyer, Mark Sisti, countered that the explosion could have been caused by employee error, a stray piece of metal that created friction inside a machine, a worker smoking in violation of the rules or a machine that was running too fast. He noted that Sanborn was in North Carolina the day of the explosion and had no control over the plant or the conditions that led to the blast.

He said he and his client were "disappointed" after the verdict.

"We were shocked," he said. "And, of course, we will be preparing for an appeal."

Sanborn, 64, faces up to 30 years in prison on each of two counts of manslaughter and up to seven years on each count of negligent homicide. A sentencing date has not been set.