As the world's leading maker of generic drugs, Teva Pharmaceutical Industries Ltd. is a huge source of pride for Israel. Now, following an announcement of planned layoffs and revelations it enjoys sweeping tax exemptions, it is on the defensive and fighting to save its reputation as the country's flagship company. 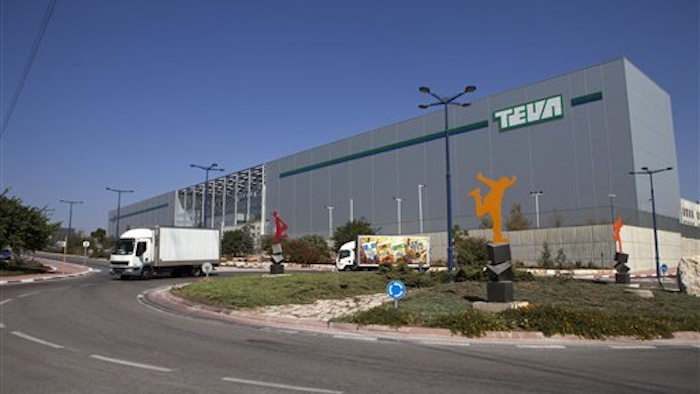 JERUSALEM (AP) -- As the world's leading maker of generic drugs, Teva Pharmaceutical Industries Ltd. is a huge source of pride for Israel. Now, following an announcement of planned layoffs and revelations it enjoys sweeping tax exemptions, it is on the defensive and fighting to save its reputation as the country's flagship company.

Teva, which last year reported revenue of more than $20 billion, said last week it will reduce its global workforce by about 10 percent — including firing about 800 employees in Israel — as part of a restructuring plan.

The news set off an outcry and a sense of betrayal in a country that has boosted Teva with grants and subsidies long before it emerged as a global powerhouse.

At this week's opening of the winter session of parliament, which was dominated by speeches on Iran and the Palestinians, opposition leader Shelly Yachimovich devoted a large part of her address to Teva.

"Layoffs at a company that pays almost zero taxes are an act of cannibalism. There is no other word," she said. "Teva has grossly violated its contract with the state. It is demonstrating an utter lack of solidarity, commitment to society, and gratitude."

Under heavy public pressure, Teva has put the firings on hold, meeting with government officials and the powerful Histadrut labor union, and vowing to re-evaluate its plan.

Part of the outrage stems from Israel's socialist roots and the belief that a workplace has a special obligation to protect its employees. The anger is especially profound because Teva is affectionately referred to as "Israel's company."

"It's like our national carrier. To work for Teva is a badge of honor among Israelis," said Dror Strum, head of the Israeli Institute for Economic Planning. "The general feeling is that Teva owes us because we backed it and helped it flourish. This feels like some kind of treason."

The restructuring "brings capitalism to its most blunt edge" and feels like a "slap to the face" to those Israelis who supported the company for so long, Strum said.

Adding to the sense of betrayal, the state comptroller, a government watchdog agency, published a scathing report showing years of preferential treatment for Teva.

The report said Teva got tax breaks of nearly 12 billion shekels, or $3.4 billion, between 2006 and 2011. That amounted to more than a third of all tax breaks given to Israeli corporations.

"Billions of shekels were given to companies without any special demands of them," wrote comptroller Joseph Shapira. "It is unreasonable that while part of the population struggles under the burden on taxes and the cost of living, huge companies enjoy sweeping exemptions."

The company did not respond to repeated requests for comment.

Teva, which reported a second quarter loss of $452 million, said in its announcement that it expects to save about $2 billion annually by the end of 2017. The move sent the company's U.S.-traded shares up nearly 3 percent.

But in the hearts of Israelis, its stock plummeted.

"Teva claims to be a moral company. If you are moral, you should consider that once you get a tax break that means that you cannot fire people in Israel unless it's the last resort. But as far as I can see, and I've seen some figures, this is not the last resort," said Karin Alharrar, a lawmaker from the centrist Yesh Atid party. "They have let us down."

The company dates back to 1901, when its founders launched a small importer of medications. According to the company website, it began producing drugs in the 1930s and became known as Teva Pharmaceutical Industries in 1976.

Its late CEO, Eli Hurwitz, ran the company from 1976 to 2002 and received Israel's highest award for lifetime achievement. Teva's aggressive expansion included acquisitions around the globe and patent challenges.

Its takeover of Ivax Corp. in 2005 and Barr Pharmaceuticals in 2008 for about $7.4 billion each were the biggest by an Israeli company and cemented Teva's position as the world's largest producer of generic drugs.

The company also branched out into developing branded drugs, including Copaxone, developed in Israel for the treatment of multiple sclerosis. It also has a patent on Azilect, a treatment for Parkinson's disease. It is the largest company on the Tel Aviv Stock Exchange and a widely held Israeli share on the Nasdaq Stock Market.

Headquartered in Israel, Teva employs about 46,000 people worldwide, and most of its income is generated overseas. It has roughly 7,400 employees in Israel, according to its 2012 annual report.

Yachimovich, the opposition leader, directed much of her wrath at Levin, who reportedly earns more than $3 million a year. Teva does not disclose the salaries of its top executives.

"Leave here, call Jeremy Levin," Yachimovich said, looking at the prime minister. "Tell him — don't ask him, tell him — that he is not firing even one Israeli employee from Teva. Not a contractor, not an employee, nothing, no one."

Ravit Hecht, a columnist for the Haaretz daily, said the cutbacks should be "a wake-up call for anyone who is still engrossed in some patriotic romantic dream."

"It's just another company in a capitalist world," she wrote. "Teva doesn't represent Israel but itself and its shareholders, and it is no longer interested in the role of national icon. ... In the Israel of 2013 ... economic viability takes precedence over all else, including national sentiment."