Thrill-seekers eager to try the next new watersport are rushing to strap on jetpacks that propel people into the air with the help of pumped water. But the devices are meeting calls for regulation in Hawaii, where fishermen, scientists and state officials are questioning their safety and how they may affect fish and coral. 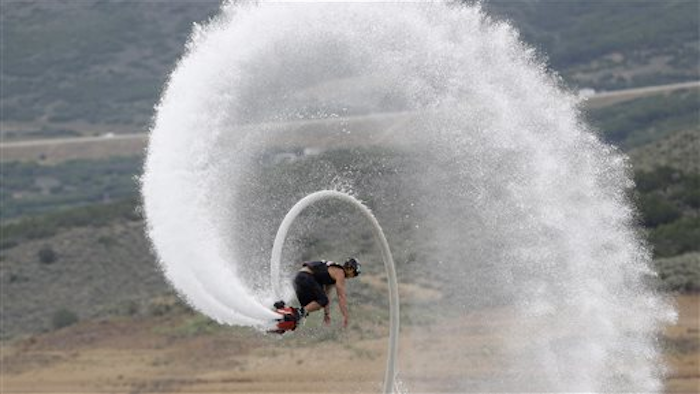 Thrill-seekers eager to try the next new watersport are rushing to strap on jetpacks that propel people into the air with the help of pumped water. But the devices are meeting calls for regulation in Hawaii, where fishermen, scientists and state officials are questioning their safety and how they may affect fish and coral in the state's heavily trafficked tropical waters.

A device called the Jetlev can lift a person 30 feet high by pumping water from a backpack through a hose connected to a small, unmanned boat. Another contraption called the Flyboard, which looks like a small snowboard attached to a hose, can propel riders 45 feet in the air. Promotional videos racking up millions of YouTube views show riders shooting out of the ocean into the sky, then diving back in the water like dolphins.

The devices are starting to show up for recreational rental in San Diego, Key West, Fla., and Cancun, Mexico.

But some in the Aloha State are far less enthusiastic about the machines. Complaints from fishermen and other ocean enthusiasts prompted the state Department of Land and Natural Resources to call a public meeting about the devices last month. The department's top enforcement officer, Randy Awo, expressed alarm about unsafe maneuvers, such as riders dive-bombing into the water next to moving boats.

University of Hawaii coral scientist Bob Richmond told officials he was concerned about the noise the devices make, as fish avoid areas that are too loud. He's also worried fish and coral larvae could get pumped through some of the equipment the watercraft use and die.

Fisherman Carl Jellings said watercraft already scare fish away from Oahu's bays, and he worries these new machines will just add to the problem.

"More and more and more these bays are being run over, taken over by other activities. The marine life that depend on these places — they're being displaced," he said in an interview.

The state may find a way to accommodate the devices, perhaps in selected places, said William Aila, chairman of the Board of Land and Natural Resources. But Aila said studies are needed examining how such watersports may affect fish and coral.

"When you look at it, it looks fairly exciting," he said. "But you got to look beyond the excitement."

Thom Hall, whose Salt Lake City company Rocky Mountain Flyboards has the rights to distribute the boards in Hawaii, said he wouldn't object to regulations, so long as he has input.

"There's room for this device to be used and be used in a responsible way," Hall said.

Jeffrey Krantz, owner of the company that operates the sole Jetlev in commercial use on Oahu, suggested the state set aside areas for jetpack use. His company, H2O Sports Powered by Seabreeze, takes about 10 people on Jetlev rides daily, at a rate of $179 for 15 minutes.

"Put it out all on a big map and say: OK, this new technology could be something very useful for Hawaii, for its tourism, its residents and so on. Where would it be best to put it?" Krantz said.

Victor Verlage, a 51-year-old corporate executive who donned a Jetlev jetpack while visiting Honolulu from Mexico, compared it to kite surfing but said it's "10 times better."

"You feel the adrenaline rush," he said.

Leasing has a host of benefits that most organizations look at when making a decision.
Jul 26th, 2021
Follow Us
Most Recent