Whitney Foard Small loved China and her job as a regional director of communications for a top automaker. But after air pollution led to several stays in hospital and finally a written warning from her doctor telling her she needed to leave, Small packed up and left for Thailand. 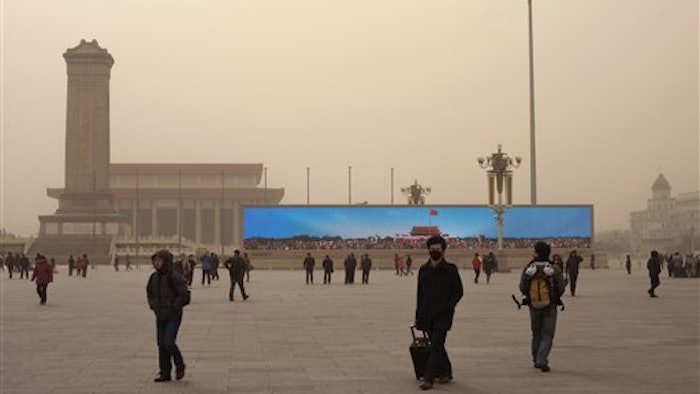 BEIJING (AP) -- Whitney Foard Small loved China and her job as a regional director of communications for a top automaker. But after air pollution led to several stays in hospital and finally a written warning from her doctor telling her she needed to leave, Small packed up and left for Thailand.

In doing so, the Ford Motor Co. executive became another expatriate to leave China because of the country's notoriously bad air. Other top executives whose careers would be boosted by a stint in the world's second-largest economy and most populous consumer market are put off when considering the move.

There is no official data on the numbers leaving because of pollution, but executive recruitment companies say it is becoming harder to attract top talent to China — both expats and Chinese nationals educated abroad. The European Chamber of Commerce in China says foreign managers leave for many different reasons but pollution is almost always cited as one of the factors and is becoming a larger concern.

If the polluted skies continue, companies may have to fork out more for salaries or settle for less qualified candidates. Failure to attract the best talent to crucial roles could result in missed commercial opportunities and other missteps.

Poor air quality has also added to the complaints that foreign companies have about operating in China. Even though China's commercial potential remains vast, groups representing foreign companies say doing business is getting tougher due to slowing though still robust economic growth, strict Internet censorship, limits on market access and intellectual property theft.

China's rapid economic development over the last three decades has lifted hundreds of millions out of poverty but also ravaged the environment as heavy industry burgeoned, electricity demand soared and car ownership became a badge of status for the newly affluent in big cities. Health risks from pollution of air, water and soil have become a source of discontent with Communist Party rule among ordinary Chinese.

Foreigners regularly check the air quality readings put out by the U.S. Embassy and consulates on their Twitter feeds when deciding whether to go out for a run or let their children play outside.

The pollution has become even more of a hot topic since January, when the readings in Beijing went off the scale and beyond what is considered hazardous by the U.S. Environmental Protection Agency. On the worst days, skyscrapers disappeared into the capital's murky skyline and masks multiplied on the streets and sold out at convenience stores. At the same time, China's state media gave unprecedented coverage to the pollution following months of growing pressure from a Chinese middle class that has become more vocal about the quality of its air.

"January was probably the worst," said Australian Andrew Moffatt, who worked for nine months in Beijing as regional manager for a chain of language schools before the pollution pushed him to return to Brisbane in March with his wife and 5-year-old son.

"Back in November I had been sick and then we went on holiday to the beach in Hainan and it just reminded me of Australia and I just thought we could be breathing this quality air every single day rather than polluted air in Beijing," he said.

And it's not only Beijing where the air pollution is driving expats away.

Ford transferred its regional headquarters from Bangkok to Shanghai in 2009. Four months after the move, Small, the director of communications, had her first major asthma attack.

"I had never had asthma in my life, never ever had asthma before China," said Small, who quit the country in May last year. Her asthma was exacerbated by an allergy to coal, which is the source of about 70 percent of China's energy. Her allergy was first identified in 2005 after a six-week assignment in Beijing ended with her being hospitalized for three days in Hong Kong with her lung function at about 30 percent.

In Shanghai, the asthma resurfaced. "Three hospitalizations later, my doctor said it was time to call it quits," she said.

Her frequent treatments — involving inhalers, steroids and a nebulizer in the mornings and evenings to get medication deep into her lungs — meant the medication became less effective.

"I actually got a written warning from my pulmonary doctor and it said you need to reconsider for your life's sake what you're doing and so that was it. I didn't really have a choice, my doctor made it for me."

Ivo Hahn, the CEO of the China office of executive search consultants Stanton Chase, said that in the last six months, air pollution has become an issue for candidates they approach.

"It pops up increasingly that people say 'well we don't want to move to Beijing' or 'I can't convince my family to move to Beijing'," he said. Two expats, one Western and one an overseas Chinese, recently turned down general manager and managing director positions because of the air pollution, he said.

Hahn thinks this trend will only strengthen over the next one or two years because the highest-level executives generally "are not working primarily for their survival."

"They normally get a decent pay, they are generally reasonably well taken care of, so the quality of life actually it does matter, particularly when they have children," he said.

Some, however, say that China has become too important economically for up-and-coming corporate executives to ignore. It generates a large and growing share of profits for global companies while still offering a vast untapped potential. Its auto industry, now the world's largest by number of vehicles sold, is expected to outstrip the U.S. and Europe combined by 2020 as car ownership rises from a low level of 50 vehicles per 1,000 people.

"It's increasingly important for people who want to have careers as managers in multinational companies to have international experience and as part of their career path, and in terms of international experience, China is one of the most desirable places because of the size of the market and growth and dynamism of the market," said Christian Murck, the president of the American Chamber of Commerce in China.

Carl Hopkins, Asia managing partner of legal search firm Major, Lindsey & Africa, said Chinese nationals who had studied abroad at top universities or business schools were reluctant to return unless they had elderly family to take care of.

"There is an unwillingness for these people to return to China because they have got a better standard of living in the States or somewhere else than going to Beijing and Shanghai with its current issues with pollution," Hopkins said, adding that this had become more prevalent over the last year.

Hahn said the effects of expats refusing to relocate to China aren't going to be felt overnight, but eventually "either companies will have to pay a higher price overall because maybe candidates may have to commute as an example, or they may lower their standards or they may offer the position to somebody who may actually not be quite as qualified."

If the current trend hardens, it would have some economic impact, said Alistair Thornton, senior China economist at IHS in Beijing.

"Expats contribute almost nothing to China's growth because the numbers are just tiny, but intangibly they contribute quite a significant amount" by introducing foreign technology, best practices and Western management techniques "that Chinese companies are harnessing and using to drive growth," said Thornton.

He is leaving Beijing in June with air pollution one factor.