South Korea on Thursday warned of unspecified "grave measures" if North Korea rejects talks on a jointly run factory park shuttered for nearly a month — setting up the possible end of the last remaining major symbol of inter-Korean cooperation. 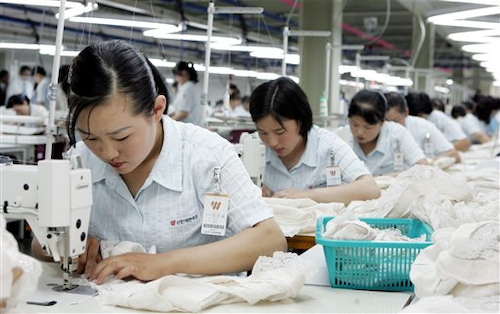 SEOUL, South Korea (AP) -- After weeks of threatening rhetoric from the North, South Korea on Thursday promised its own unspecified "grave measures" if Pyongyang rejects talks on a jointly run factory park shuttered for nearly a month.

The park in the North Korean border town of Kaesong is the most significant casualty so far in the recent deterioration of relations between the Koreas. Pyongyang barred South Korean managers and cargo from entering North Korea earlier this month, then recalled the 53,000 North Koreans who worked on the assembly lines.

South Korea's Unification Ministry on Thursday proposed working-level talks on Kaesong and urged the North to respond by noon Friday, warning that Seoul will take "grave measures" if Pyongyang rebuffs the call for dialogue.

In a televised news conference, spokesman Kim Hyung-suk refused to say what those measures might be. Some analysts said Seoul would likely pull out the roughly 175 South Korean managers who remain at the complex.

Kim said South Korea set a Friday deadline because the remaining workers at Kaesong are running short of food and medicine. He said the companies there are suffering economically because of the shutdown.

To resolve deadlocked operations at Kaesong, Kim said North Korea should first allow some South Koreans to cross the border to hand over food and medicine to the managers.

North Korea didn't immediately respond Thursday, according to the Unification Ministry. North Korean state television showed fighter jets screeching across the sky and goose-stepping soldiers parading in front of leader Kim Jong Un at a ceremony in Pyongyang marking the 81st anniversary of the founding of the military. Tens of thousands of people visited Pyongyang's Kumsusan Palace to celebrate the anniversary.

The demand for talks follows a lull in what had been a period of rising hostility between the Koreas. Pyongyang has recently eased its threats of nuclear war and expressed some tentative signs of interest in dialogue. Its demands, including dismantling all U.S. nuclear weapons, go far beyond what its adversaries will accept, but Washington, Seoul and Beijing have also pushed for an easing of animosity.

The Kaesong complex is the last major symbol of cooperation remaining from an earlier era that saw the Koreas set up various projects to facilitate better ties.

The factory park has operated with South Korean know-how and technology and with cheap labor from North Korea since 2004. It has weathered past cycles of hostility between the rivals, including two attacks blamed on North Korea in 2010 that killed 50 South Koreans.

Impoverished North Korea objects to views in South Korea that the park is a source of badly needed hard currency. South Korean companies paid salaries to North Korean workers averaging $127 a month, according to South Korea's government. That is less than one-sixteenth of the average salary of South Korean manufacturer workers.

Pyongyang also has complained about alleged South Korean military plans in the event the North held the Kaesong managers hostage.

South Koreans remaining at Kaesong are free to leave, but have been staying to protect their companies' equipment and products. Their food, which had been brought in before North Korea closed the border, is dwindling, and there has been a daily trickle of managers returning home.

On Wednesday, South Korean President Park Geun-hye said the country won't seek to resolve the Kaesong standoff by making concessions to the North. That was a reference to past liberal governments that were accused of providing the North with almost unconditional financial assistance to promote reconciliation.

"How the Kaesong issue is handled will be a touchstone for whether South-North relations will be predictable and sustainable," Park told South Korean journalists, according to her office. "I want the issue to be resolved quickly, but I would say there should not be a solution like funneling" aid, as has happened in the past.

Kim, the spokesman, said: "It's very regrettable for North Korea to reject (taking) the minimum humanitarian measures for our workers at the Kaesong industrial complex."