Small fertilizer plants nationwide fall under the purview of several government agencies, each with a specific concern and none required to coordinate with others on what they have found. The small distributors — there are as many of 1,150 in Texas alone — are part of a regulatory system that focuses on large installations and industries. 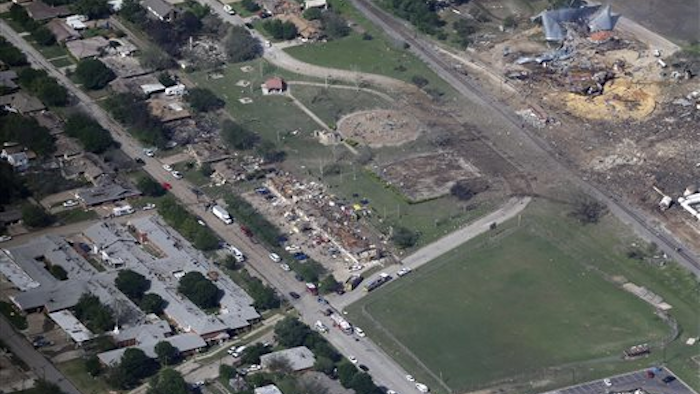 WEST, Texas (AP) -- There were no sprinklers. No firewalls. No water deluge systems. Safety inspections were rare at the fertilizer company in West, Texas, that exploded and killed at least 14 people this week.

This is not unusual.

Small fertilizer plants nationwide fall under the purview of several government agencies, each with a specific concern and none required to coordinate with others on what they have found.

The small distributors — there are as many of 1,150 in Texas alone — are part of a regulatory system that focuses on large installations and industries, though many of the small plants contain enough agricultural chemicals to fuel a major explosion.

The plant in West had ammonium nitrate, the chemical used to build the bomb that blew up the Alfred P. Murrah federal building in Oklahoma City in 1995, killing 168 people. According to a document filed in 2012 with the Texas Department of State Health Services, the maximum amount of this "extremely hazardous substance" the plant could store in one container was 90 tons, and the most it could have on site was 270 tons. It is unknown how much was onsite at any given time, or at the time of the explosion.

It was also authorized to handle up to 54,000 pounds of anhydrous ammonia, a substance the Texas environmental agency considers flammable and potentially toxic.

"This type of facility is a minor source of air emissions," Ramiro Garcia, the head of enforcement and compliance at the Texas Commission on Environmental Quality, told The Associated Press.

"So the inspections are complaint driven. We usually look at more of the major facilities."

No federal agency determines how close a facility handling potentially dangerous substances can be to population centers, and in many states, including Texas, many of these decisions are left up to local zoning authorities. And in Texas, the state's minimal approach to zoning puts plants just yards away from schools, houses and other populated areas, as was the case in West.

That plant received a special permit because it was less than 3,000 feet from a school. The damage from the blast destroyed an apartment complex, nursing home and houses in a four-block area.

State and federal investigators have not yet determined the cause of the disaster, which occurred Wednesday night after a fire broke out at the site after work hours. The explosion that followed could be heard miles away and was so powerful it registered as a small earthquake.

The West Fertilizer Co. stored, distributed and blended fertilizers for use by farmers around the Central Texas community. The plant opened in 1962 outside the rural town of 2,800, but development gradually crept closer. Wednesday night, residents and rescue workers tried to evacuate the area as the fire consumed the plant.

Donald Adair, the plant's owner, said in a statement Friday he was cooperating with the investigation and expressed sympathy for the victims. He has not returned phone calls seeking comment.

Over the years, the fertilizer company was fined and cited for violations by federal and state agencies.

Last summer, the U.S. Pipeline and Hazardous Materials Safety Administration assessed a $10,000 fine against West Fertilizer for improperly labeling storage tanks and preparing to transfer chemicals without a security plan. The company paid $5,250 after reporting it had corrected the problems.

The U.S. Environmental Protection Agency also cited the plant for not having an up-to-date risk management plan. That problem was also resolved, and the company submitted a new plan in 2011. That plan, however, said the company did not believe it was storing or handling any flammable substances and didn't list fire or an explosion as a danger.

David Gray, an EPA spokesman in Dallas, said the company's plan identified a worst-case scenario as an accidental release of all 54,000 pounds of anhydrous ammonia, which at room temperature is a gas.

"This scenario is a plausible worse-case scenario as gaseous anhydrous ammonia can be lethal," Gray said.

The risk management plan also did not cite a possible explosion of ammonium nitrate, the solid granular fertilizer stored at the site. But that would not be unusual, he said, because ammonium nitrate is not regulated under the Clean Air Act.

The plant's plan said there was no risk of fire or explosion and noted they had no sprinklers, water deluge or other safety mechanisms installed.

"We do not yet know what happened at this facility. The ongoing investigation will inform us on the plan's adequacy," Gray said.

The Texas Commission on Environmental Quality also dealt with the company and issued a permit for handling anhydrous ammonia, which requires safety equipment the company had told the EPA it didn't have. But TCEQ acknowledged it may never have checked to confirm the equipment was there.

"It's a minor source under the Clean Air Act so it doesn't get much scrutiny at all," said Neil Carman, a Sierra Club clean air expert and chemist who used to work for the TCEQ.

The company's last contact with regulation may have come as recently as April 5, when the Texas Office of the State Chemist inspected the plant. But that agency focuses mostly on ensuring that commercial fertilizers are properly labeled and blended, said Roger Hoestenbach, the office's associate director. His inspectors found no problems, he said, but they would not have checked for safety systems such as sprinklers. That office also provided the company with the required license to store and handle ammonia nitrate and renewed it in September after a summer inspection, he said.

Many other towns in Texas have small fertilizer distributors operating under similar regulations near populated areas.

Matt Murray, owner of ABC Fertilizer and Supply in Corsicana, bought his facility about 15 years ago. It sits in an industrial zone in the town of about 23,700 people, but in a community barely five miles long, it is still not far from the population center, he said.

"Every little community, town that's in Texas, has one of these," he said.

Even though Murray said he has discussed an evacuation plan with his local fire chief, there is nothing in writing. And he isn't required to have a formal plan. That may be changing now, he said.

"It's been something that's been brewing for years and years, ever since Oklahoma," he said.