Threats to wildlife have flown largely under the radar. But as studies detail plans for thousands of miles of new pipelines and related infrastructure, the dangers to biologically rich forests that have rebounded since vast clear-cutting in the 1800s are taking on new urgency. 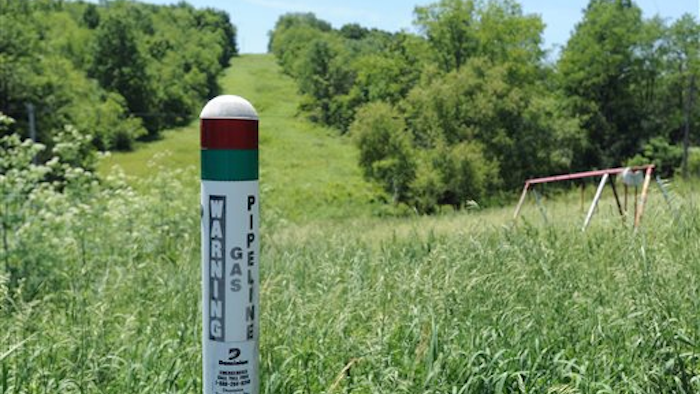 PITTSBURGH (AP) -- Hawks swoop in and gobble up songbirds. Raccoons feast on nests of eggs they never could have reached before. Salamanders and wildflowers fade away, crowded out by invasive plants that are altering the soil they need to thrive.

Like a once-quiet neighborhood cut up by an expressway and laced with off ramps, northeastern forests are changing because of the pipelines crisscrossing them amid the region's gas drilling boom, experts say.

Environmentalists have loudly worried that hydraulic fracturing, or fracking, may threaten water and air, though the Obama administration and many state regulators say the practice is safe when done properly.

Threats to wildlife have flown largely under the radar. But as studies detail plans for thousands of miles of new pipelines and related infrastructure, the dangers to biologically rich forests that have rebounded since vast clear-cutting in the 1800s are taking on new urgency.

"If you wanted to create a perfect storm for biological invasion, you would do what the energy companies are doing in north-central Pennsylvania," said Kevin Heatley, an ecologist with the national firm Biohabitats who works to restore areas that have been damaged by human activity. "You can only put so many bloody parking lots in the woods."

Energy companies, which say they are being responsible stewards of the land, have rushed to unlock the natural gas lying in the shale beneath Pennsylvania, Ohio and West Virginia. The gas has lowered energy costs, allowed the U.S. to lessen reliance on foreign energy and provided private landowners who sit atop well sites with a gold mine in royalties. New York, which also has large reserves, is trying to decide whether to allow fracking.

To get the gas to market, hundreds of miles of pipeline are being laid along clear-cut forest "tunnels" sometimes dozens of yards wide.

The new energy development is "almost a spider web coming down to the forest," said Nels Johnson, of the Pennsylvania chapter of The Nature Conservancy, which estimates the state could see thousands of miles of new pipelines over the next two decades.

Even northeastern states that have put a hold on fracking aren't immune, because many import natural gas. The U.S. Energy Information Administration found that 245 miles of new pipelines were laid in the Northeast last year, and that figure is projected to grow.

Wind turbine development poses similar threats, too. The Nature Conservancy says Pennsylvania already has more than 600 of the giant blades, with the potential for thousands more in coming decades.

The total acreage taken up by the pipelines, wind projects and related development isn't that large, but the open spaces they create allow predators and invasive species to permeate a canopy of trees that once kept them at bay.

It's not hypothetical, scientists say. Studies and observations have documented invasions. And just as with humans, the uninvited guests change the neighborhood.

Forest fragmentation opens the door to invasive species such as the cowbird, a type of blackbird that normally prefers open land, said Bridget Stutchbury, a biologist at York University in Toronto who studies forest songbirds.

"The female cowbird sneaks around the forest, laying her egg in other species' nests," Stutchbury said. Forest birds such as thrushes and warblers don't realize the egg isn't theirs and expend energy raising chicks from another species in what she called a "nifty strategy for child-rearing."

The droppings that cowbirds and other invaders leave behind can also contain seeds from invasive plants that will sprout, spread and ultimately change the soil so much that some forest salamanders and wildflowers can't survive, experts note.

A report by the U.S. Geological Survey, released last week, found that in Pennsylvania's Susquehanna County, at the heart of the drilling boom, the number of patches or sections of forest increased by about 156 between 2001 and 2010, with Marcellus Shale drilling and related pipelines responsible for most of the change.

The energy industry said that it welcomes original research, but that it should be seen in context.

The Geological Survey report, said Patrick Creighton, a spokesman for the Marcellus Shale Coalition, an industry group, found that oil and gas activity affected less than 1 percent of the forest area in Allegheny and Susquehanna counties.

That number may seem small, but experts say it's a cause for concern, nonetheless.

"As an ecologist, you can look at that and say, wow, there are going to be changes," said Terry Slonecker, the researcher who authored the USGS report, noting it's too early to know where fragmentation has gone too far.

There is concern even at the numbers the USGS found, Stutchbury said, noting that without serious reforestation efforts, "we can anticipate really big impacts not just on birds, but all these forest critters."

Creighton, of the drilling coalition, said companies are sensitive to the issue.

"Well sites and pipeline right of ways are temporary construction projects on mostly private land that will be reclaimed after work is complete," he said.

The company KinderMorgan is building a gas pipeline extension in northeastern Pennsylvania that has attracted protests from environmental groups. Spokesman Richard Wheatley said that the company follows the guidance of the Federal Energy Regulatory Commission for all interstate pipeline projects and that other state and federal agencies can be involved, too.

"Once a project is placed in service, companies follow up with additional environmental and safety monitoring/inspection and remediation," Wheatley said in an email.

Heatley, the ecologist, said that "not one" of the energy companies drilling in the area has a long-term restoration plan for sensitive deep-forest environments, and that permits usually require only minimal restoration, such as planting grasses.

Still, the reality is that modern life demands resources and energy, and even the alternatives — such as wind turbines — can threaten forests, too.

The Nature Conservancy is examining potential effects from gas drilling and wind turbines on an eight-state region from New York to Tennessee. That report is due out later this year. The group notes that old and new energy sources have both promise and risk.

Careful planning and reforestation efforts could reduce the effects of pipelines, wind turbines and other human activity, scientists said. For example, multiple pipelines could go on one right of way, or wind turbines might go on land already barren because of old coal mining.

Planting native shrubs in the pipeline pathways, which need to remain treeless to avoid root damage to pipes and to give maintenance crews access, would be better than just grass, the Nature Conservancy noted.

Why should anyone care, Heatley asked, whether forest creatures get replaced by invasive plants and animals that can better tolerate human activity?

To see crows, opossums and squirrels, "you can go anywhere," he said, and in the Northeast it's easy to find trees, but large blocks of deep forest are rare. "It's a unique asset."